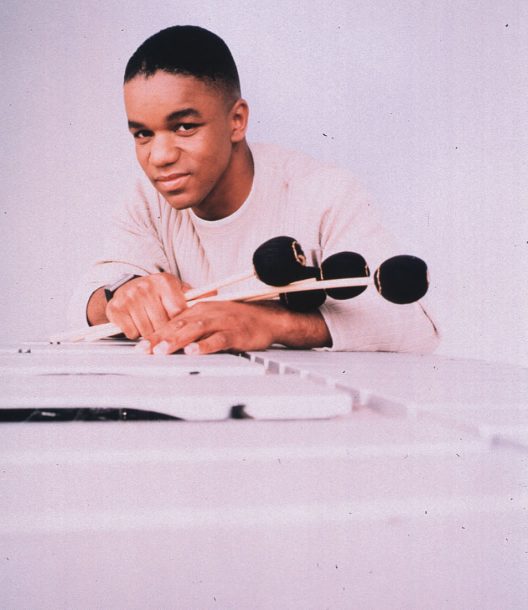 After working as a sideman with such luminaries as Wynton Marsalis and Joe Henderson, vibraphonist Stefon Harris, 25, has made his first recording as a leader. A Cloud of Red Dust (Blue Note) is a showcase for Harris’s burgeoning talents, featuring 10 of his original compositions as played by a shifting roster that includes trombonist Steve Turre, saxophonist Greg Osby, and pianist Mulgrew Miller.

Harris, an Albany, New York native, trained as a classical percussionist before switching to jazz vibraphone in college. Last year, he received his MA in jazz performance from the Manhattan School of Music. He is one of the brightest musicians of any age on the current scene, with many pearls of wisdom to offer from his youthful but already full musical experience:

On Joe Henderson, his mentor: “He’s a genius in so many ways, even outside of music. He’s extremely well-read and speaks several languages, and so that type of logic is in his playing, in his clarity of ideas.”

On John Coltrane, his idol: “Ultimately, I feel that what we’re trying to do musically is articulate some image of our inner spirit. And I find that with Coltrane, it’s just unbelievably articulate.”

On the audience: “I never wanted to see tricks when I went to see someone perform. I don’t want to see anything flashy. I don’t even want the artist to think about me. What I want to do is watch the actual making of art. As an audience member, I like to watch it from afar.”

On the blues: “The best definition of the blues is optimism in the face of adversity. I think that throughout African-American history in this country, we’ve had so many things to deal with, yet when you look at our art and our culture, and a lot of our celebration practices, it’s very positive. I’d say that it’s probably a part of our culture as African-Americans, that type of optimism.”