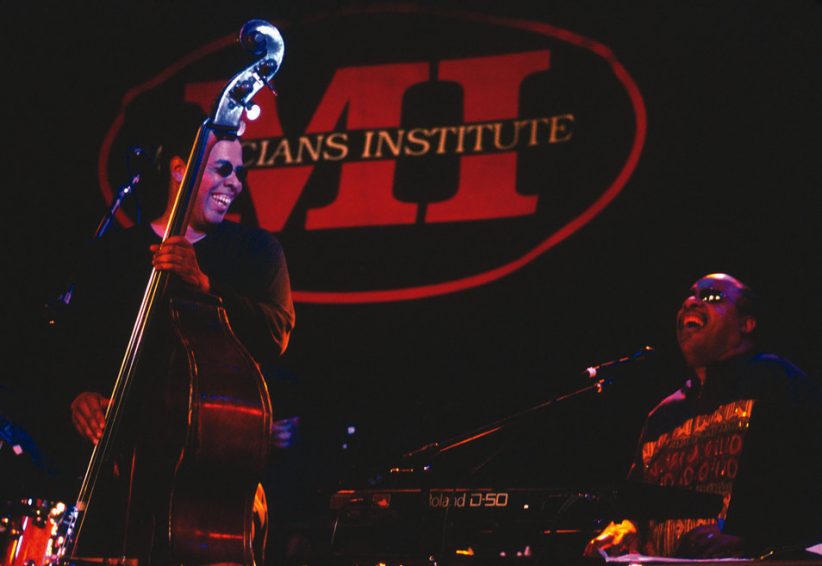 Filmed in 2002 as part of Stanley Clarke’s annual residency at the Musicians Institute in Hollywood, Calif., Night School is as much a celebration of Stanley Clarke as it is of the bass. Joined by an all-star, albeit random, cast of friends and musicians, Clarke demonstrates his ability to dabble in many different musical arenas and exhibit masterful skill and control in each of them. “Wild Dog” opens the night’s festivities with Clarke playing a slick lead melody while managing to slip into eye-popping runs and offbeat bass fills. Armand Sabal-Lecco provides back-up bass duties throughout much of the performance, and while at times it would be great to see Clarke do all the work himself-truly showcasing his ability to be the star and a solid sideman-Sabal-Lecco’s presence allows Clarke to step forward and really let his solos shine.

Contemporary rock musicians as well as jazz greats join Clarke onstage, most notably Flea from the funk-rocking Red Hot Chili Peppers, who lays down some nimble funk solos of his own. Stevie Wonder leads the band through a version of “Giant Steps” and Stewart Copeland tackles the Flecktones’ “Lochs of Dread,” along with Clarke, banjoist Béla Fleck and violinist Karen Briggs, and the tune has never sounded better. Clarke’s massive double-bass groove coupled with Copeland’s signature Jamaican rhythms nails the reggae tune in fine style.

The highlight of the night is without a doubt the trio tunes, comprised of Clarke, Fleck and Briggs. “Song to John” boasts Fleck and Clarke playing incredibly intricate melodies in unison before weaving rivaling melodies in and around each other’s. But it’s Briggs on violin who nearly steals the show with a series of blistering solos that make you wonder how on earth she spent 13 years on the road with Yanni.

There is some filler to get through, including a sloppy jam featuring three of the night’s drummers who can’t seem to figure out when to take a solo, and a downright painful timbale solo by Sheila E. that will have you clamoring for the remote control. The night’s finale is a take on Clarke’s bass anthem “School Days,” featuring-count ’em-11 bassists ranging from Flea to Billy Sheehan to Marcus Miller. Each one takes a solo in homage to the night’s star, Stanley Clarke, who shows that whether he’s leading a small jazz unit, conducting an orchestra or grooving to rock anthems, school is always in session.