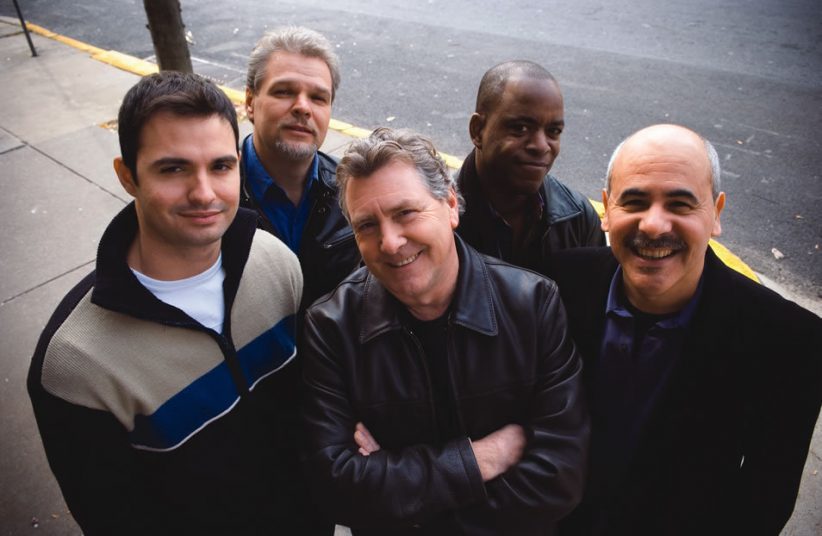 Spyro Gyra, the contemporary jazz ensemble that jokingly named itself after a species of algae, is far from tossed up on the beach. Thirty years have passed since its self-titled debut album, yet the Jay Beckenstein band still finds itself very much in the game. In February, Spyro Gyra released its 25th album and fourth for Heads Up, Wrapped in a Dream. Like Spyro’s The Deep End from 2004, the 12 songs on the new project don’t blend seamlessly into a particular genre. It’s instrumental music, sure, but not your typical polished smooth jazz–and it’s too brassy and groove-centered to be called straightahead. Let’s just call it Spyro Gyra music. “As always, there’s a degree of eclecticism to the album,” says saxophonist Beckenstein, one of two original members still in the band that formed in Buffalo, N.Y., in 1974. “It goes in a number of different styles.”

Adds keyboardist Tom Schuman, the other original member: “No matter what your artistic output has been in the past, there will always be a fresh beginning as long as you recognize the importance of creativity. Spyro Gyra’s music will always be as fresh as the moments in time it took to write and produce it. When people ask me what my favorite Spyro Gyra CD is, I say, ‘The one that is yet to be produced.'”

Another original member, Jeremy Wall, now teaches jazz at State University of New York in Oneonta, but he wrote “The Lowdown” for the new album. Meanwhile, guitarist Julio Fernandez joined Spyro in 1984 and bassist Scott Ambush hitched up in 1992. Longtime drummer Joel Rosenblatt left after The Deep End and was replaced by Cuban-born Ludwig Afonso–but you’ll only find Afonso on one song on the new CD. “We started the record with him, but we weren’t getting what we wanted,” says Beckenstein. “We take no prisoners.” Josh Dion, who has his own band in New York and has performed with smooth-jazz guitarist Chuck Loeb, handles the bulk of drumming on Wrapped in a Dream. But don’t feel sorry for Afonso just yet. “He really elevated his game after we discussed his role with the band,” Beckenstein says. “He came out one gig and played with fire and spirit–and in process changed our minds. So now Spyro Gyra has two drummers.”

How it will all shake out on tour remains to be seen. But there’s no denying that Spyro Gyra earns its living on the road. “Frankly, if it was about hit singles, we’d have been doomed,” Beckenstein says. “But we’ve built a consistent following over many years of touring and releasing records. We have a large base of people–thousands of people in every city we play. They give us the ability to continue what we’re doing–to keep going to Kansas City, Bakersfield and Ann Arbor, all these places that we’ve played 15 or 20 times or more. We still go and people are still interested.”

Those who haven’t experienced the band live recently might do a jaw-drop when getting a glimpse of Schuman’s new, slimmed-down look. The keyboardist, who recently released the solo CD Deep Chill (JazzBridge/ Monogram), has shed 65 pounds over the last year and a half. Schuman initially chucked a few pounds through a popular diet plan but reverentially talks about what’s been able to keep it off and boost his stage energy. “My wife, Yvonne, had been transformed through the teachings of Ann Wigmore and the ‘Living Food Lifestyle.’ I guarantee it will cure whatever ails you and slow the aging process.”

Beckenstein says the whole band has noticed the benefits of Schuman’s svelte appearance. “Tom’s entire sense of well-being improved,” Beckenstein says. “He’s feeling good about himself and the world. He’s so much fun to work with and has a positive spin. He even approaches problems as if there’s an opportunity for something good to happen.”

New faces and appearances aren’t the only changes for Spyro Gyra. Beckenstein recently sold the famous studio in Suffern, N.Y., that he purchased in 1981, a converted cabin he called BearTracks Studio. Beckenstein also sold the attached house where he lived all these years and where he watched his three daughters grow up. “BearTracks was built when the need for large studios was greater,” he says. “Bands rarely set up and play together anymore. BearTracks was designed at a time when everybody set up together and did it. But it’s become a bit of an anachronism. We don’t need a room to record a drummer anymore. It’s all done on ProTools.”

The band will search for a smaller studio, though, as their music is for the most part recorded live instead of through e-mail attachments.

No matter where they record, it’s apparent that Spyro Gyra bandmembers will continue to draw strength from close friendships formed from decades of touring and recording. “Spyro Gyra is not about one person,” says Beckenstein. “The nature of my instrument is that of the lead. But in terms of who gets focused on, who gets a chance to say what they have to say, it’s very egalitarian. I think that’s ultimately great, although it’s harder to market. But creatively we all like it a lot better. It’s nice to be on a team.”