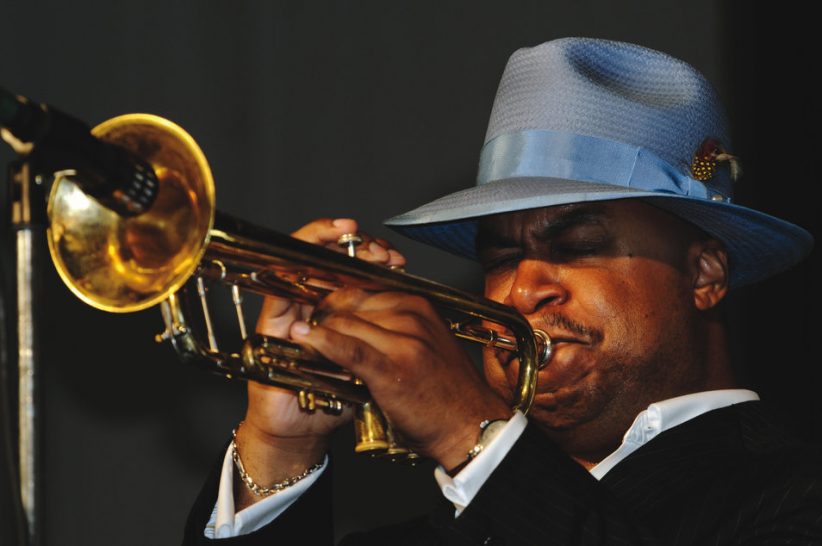 Reviewing the architecture of Rose Hall for the New York Times, Nicolai Ouroussoff wrote: “Situated in a maze of commercial interests, the jazz center shows how contorted an effort it takes to negotiate a city where business so often comes before art.” Tell us about it. Even saying “Dizzy’s Club Coca-Cola” involves contortions of a sort. This is Jazz at Lincoln Center’s new nightclub space, and it opened on Dizzy’s birthday with a Gillespie-themed festival in three parts: small group, Latin and big band. The small-group week belonged to Bill Charlap’s trio with Peter and Kenny Washington, featuring special guests Charles McPherson and Nicholas Payton.

Like the other two Rose Hall spaces, Dizzy’s boasts excellent acoustics and sightlines. Like the Allen Room, it has large (but not quite as large) glass windows behind the bandstand, affording a beautiful view and a feeling of open space. For a club, Dizzy’s is quite an expanse—think the Jazz Standard but a good deal wider. There was a long line out the door, but the room still seemed spacious after everyone filed in. This was an attentive jazz audience, but in a room this diffuse, chatterboxes on a date could choose to ignore the band. We shall see. Wood paneling around the room makes for a sleek look and warm sound, but the bare grey concrete floor leaves something to be desired. Menu-wise, Dizzy’s is enticing and reasonably priced ($30 cover charge aside). I had the pleasure of sitting with Celeste Beatty of Sugar Hill Golden Ale. Skip the Coca-Cola and order one of these, straight outta Harlem.

Hearing Bill Charlap and crew stretch on a set of “Gillespiana” was a treat. Payton was sure-footed and never shrill. In fact, a shrill trumpet note has yet to be heard in any of these rooms (even Greg Gisbert’s high-note climax on “A Night in Tunisia” a few nights ago was easy on the ears). McPherson played with profound subtlety but evinced a Dolphy/Spaulding edge on his ballad features, “Darn That Dream” and “But Beautiful.” Both Washingtons—Peter in particular—were teeming with ideas as soloists. Charlap brought swarms of harmonic insight (not to mention some jaw-dropping technique) to such traditional bop fare as “Hot House,” “Woody ‘n’ You” and “Anthropology.”

Dizzy’s will often hold a late-night “hang set,” the first of which featured pianist John Hicks and bassist Curtis Lundy. There’s talk of this becoming the new after-gig spot, in the manner of the sorely missed Bradley’s. Again, we shall see. New York could always use more community-building spaces, and if Dizzy’s Club Coca-Cola can rise above the cold corporate feel of its name, more power to it.