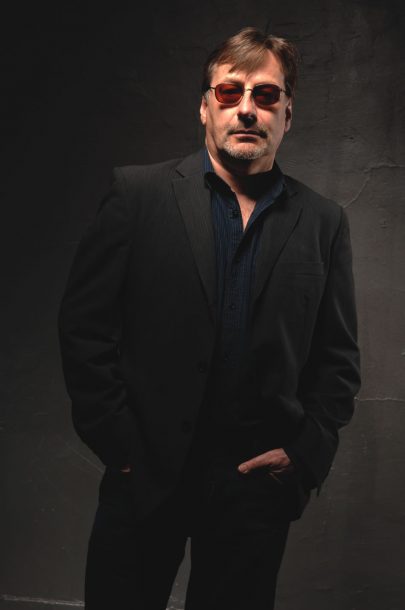 John Lyon has never been interviewed by a jazz magazine-until now. But then Lyon, since the mid-’70s the leader of the New Jersey-based soul-rock collective Southside Johnny and the Asbury Jukes, has never cut a record remotely like Grapefruit Moon: The Songs of Tom Waits. Two-and-a-half years in the making and conceived long before that, Grapefruit Moon (on Lyon’s own Leroy label) pairs the singer-whose vocal texture is now only a few shades less gritty than that of the notoriously laryngitis-lunged Waits-with the 18-piece LaBamba’s Big Band, led by Richie “LaBamba” Rosenberg. A member of the Jukes since 1976, trombonist Rosenberg, who also plays in the house band for NBC’s Late Night With Conan O’Brien, arranged the album’s dozen covers, sourced from classic Waits albums such as The Heart of Saturday Night and Rain Dogs, as well as some obscurities and more recent fare.

For Lyon, who has always featured several horn players in his bands but never 15 of them (five chairs each for saxophone, trombone and trumpet), the opportunity to re-contextualize the Waits catalog with a big band fulfills a longstanding dream. “I’m in love with his music, and I have been since his very first album,” says Lyon by phone from his home on the Jersey Shore, not far from where he and his old pal Bruce Springsteen (who has also covered a Waits song, “Jersey Girl”) first came up. “I always thought that his songs could be reinterpreted to bring out the melodies more. And I thought, Gee, I’d like to do that.”

There was no doubt in Lyon’s mind that this wouldn’t be a project for the Jukes, who are still going strong, but rather one on which Rosenberg would share the creative reins. “Richie is such a great arranger,” Lyon says, “and he’s got eclectic taste. He likes the Thad Jones-Mel Lewis Orchestra [now the Vanguard Jazz Orchestra] and the Mingus Big Band and Ellington and Basie, but he also likes the James Bond theme and the theme from The Odd Couple on TV. As long as it’s well done, he doesn’t have an attitude about it. So I wanted to give him some songs to run with and then I just put the two ideas together.”

Although Southside Johnny and the Asbury Jukes could never be confused with a jazz band, Lyon has, he says, “always taken it a little bit in that direction. I give the band a lot of leeway, because it’s more interesting for me.” That approach is rooted in a passion for jazz that began in his childhood. “My parents listened to jazz. They would play the old 78s, everything from T-Bone Walker to Duke Ellington with Ivie Anderson. I grew up listening to Count Basie and Jimmy Rushing and the Teddy Wilson Orchestra with Billie Holiday. They would come home from work and they wouldn’t put on Mantovani, they would put on Billie Holiday. I remember lying in bed when this haunting voice would come up the stairs. It really does affect you when you’re young.”

When he began playing music in his teens, Lyon sought to put together a band with horns, but “it was a guitar-oriented world,” he says, “and it took us”-us being him and his longtime colleague Steve Van Zandt, better known now as Miami Steve from Springsteen’s E Street Band-“forever. We had some of the worst players, with horrible, snotty personalities. It was a real ordeal but we eventually put it together.”

With the Jukes, Southside Johnny has taken on pieces of the Waits catalog before, putting his spin on “New Coat of Paint” (which is reprised on the new album) on 1984’s In the Heat and “Gin Soaked Boy” on 2000’s Messin’ With the Blues. But Grapefruit Moon, which is produced by Dan Gralick, an associate of Rosenberg’s, takes Lyon and Rosenberg’s tribute to another level completely. These are full-bodied, ambitious arrangements: Songs like the elegiac, brassy “Johnsburg, Illinois” (from Waits’ Swordfishtrombones), the swinging opener “Yesterday Is Here” (from Franks Wild Years) and the title track’s sleepy blues not only provide fresh directions for Southside Johnny and LaBamba’s Big Band but give Waits’ material, well, a new coat of paint. The writer is among the album’s fans.

“He was very intrigued,” says Lyon, who has been an acquaintance of Waits’ since the ’70s. “I don’t think he gets a good feeling about a lot of the things that are done to his songs, but I sent him some of the early rehearsal demos and he really was very supportive. He sent me an e-mail saying, ‘Yeah, that’s great. I love the sound.'”

Waits also contributes, lending his distinctive vocal to “Walk Away,” a track Lyon found on the recently released boxed set of Waits rarities, Orphans: Brawlers, Bawlers and Bastards. “We were gonna get him to play piano on one song but he listened to what Scott Healy had done on the record and he said, ‘No, I can’t do any better than he did.'”

For Lyon, working with a big band gave him a feeling he’s rarely before experienced as a bandleader: that of not being the main focus. “As a singer with a big band, you’re attracted to the power and the intricacy. [Fronting a smaller group] you feel like the weight of the world is on your shoulders because you’ve got to carry so much. But here, there’s this whole thing that you’re a part of. When this big band kicks in, you realize that you’re just another element in this onrush of music.”