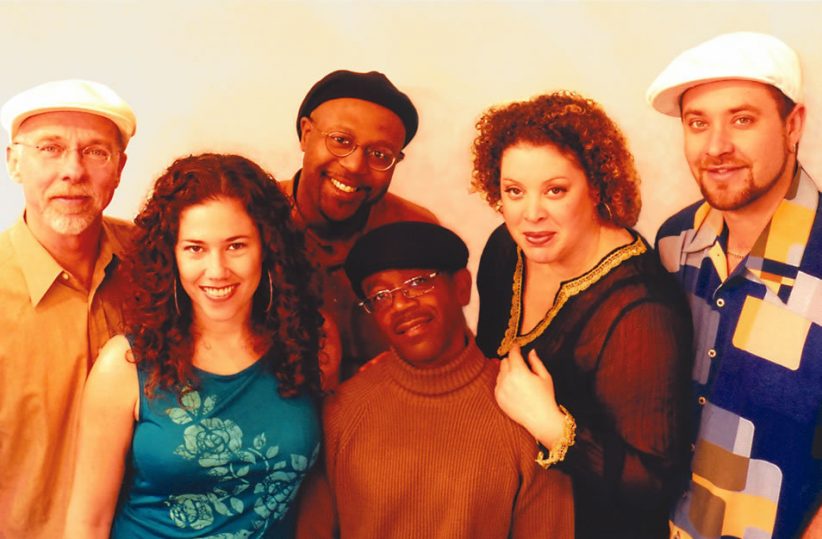 Known as Slammin, the all-body band brings together some of the West Coast’s most inventive vocalists, including Kenny Washington, Zoe Ellis, Destani Wolf and Bryan Dyer, with Hogan on beatbox and Terry, the group’s mastermind, on body percussion, rhythm dance and occasional vocals. Combining the improvisational imperative of a jazz combo with an expansive repertoire drawing on reggae, funk, bebop and soul, the multigenerational ensemble is expanding the possibilities of vocal-group jazz by incorporating its members’ far-flung influences.

“We all come from different places, but there’s so much overlap in terms of the sounds that we love,” says Dyer, who supplies the group with supple vocal bass lines. “Everyone’s really flexible. Everyone’s really loose.”

For pure inventiveness, the high point of just about every Slammin performance takes place when Terry asks someone in the audience to choose a band member to launch a free-form improvisation. The selected player starts a solo invention and then taps another member to join in. The number may end up as a duet or involve the full sextet, leading to an intricately textured group piece. As can be heard on the band’s self-named debut recording, released last year on Terry’s Crosspulse label, some of Slammin’s most exciting songs evolved from these impromptu numbers, turning into finely honed arrangements of soul-drenched pieces such as Stevie Wonder’s “Overjoyed,” Toots and the Maytals’ “Pressure Drop” and Miles Davis’ “All Blues.”

In a collection of singular musicians, Terry is the first among equals. Until last year, he was a professor in the University of California, Los Angeles’ department of world arts and culture, but the commute from his Oakland home became a drag. A founder of the innovative L.A.-based Jazz Tap Ensemble, Terry began developing his hybrid approach to body percussion and dance with the encouragement of legendary tap dancers like Honi Coles. He’s toured around the world with his Crosspulse percussion quintet, a group that draws on an international array of rhythms, from Indonesia to Venezuela. In Slammin, he’s expanded his rhythmic repertoire to encompass new-school grooves borrowed from hip-hop, Cuba and Argentina.

In many ways the group is built upon the rhythm section’s confounding cohesion, as Dyer’s deep bass lines, Terry’s fluid body work and Hogan’s dazzling beatboxing combine to create open but propulsive textures that leave plenty of space for the soloists. It’s no coincidence that Dyer is also a trumpeter and percussionist, while Hogan is best known for his work as a bassist in the Latin hip-hop ensemble Agua Libre (formerly known as O-Maya). “Steve can beatbox in odd time signatures,” Terry says. “He’s got the Afro-Cuban thing down, and we share a love of classical Indian music, so we can connect on a lot of different levels.”

While the band originally featured vocalist Vicki Randle, her commitment to The Tonight Show made regular appearances with the band impossible. Her chair was taken over by Zoe Ellis, who injected a vivifying jolt of funk and gospel fervor into the group. Destani Wolf is also an accomplished improviser who moves easily between Afro-Caribbean projects with Omar Sosa and John Santos and performances with Agua Libre. She’s equally effective belting out R&B as employing extended vocal techniques that can sound like a scratching turntable or a slide trombone.

In many ways Washington is Slammin’s wild card. Though revered by his jazz colleagues, he’s relatively unknown due to his lack of a recording under his own name. (He was featured on Roy Nathanson’s Six Degrees album Fire at Keaton’s Bar & Grill alongside Elvis Costello, Deborah Harry and Nancy King, but the project never received enough backing to make a theatrical run.) Once he’s onstage, Washington is a creative powerhouse, equally impressive on a James Brown medley or an extended scat solo that reveals his love of Ella Fitzgerald.

Washington and Wolf were on hand when the seeds for Slammin were planted back in the summer of 2002. As faculty at JazzCamp West in Oakland, they ended up onstage with Terry doing an improvised piece together with several percussionists. “We didn’t rehearse anything, we just got up and did something, and it sparked my imagination about an all-body band,” Terry says. “I just took this idea and reworked it, getting rid of the instruments.”