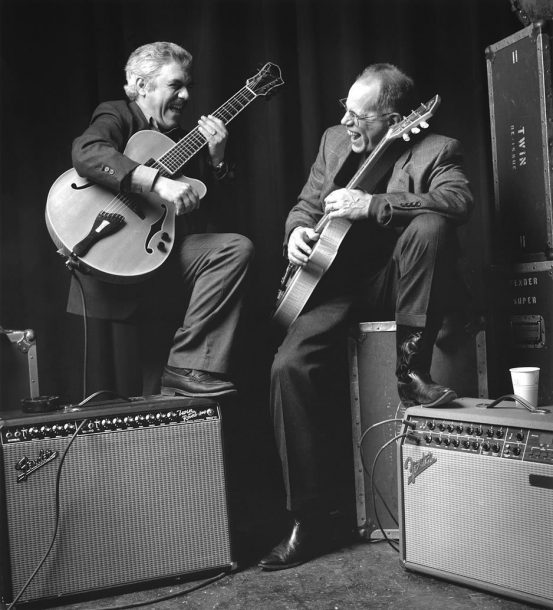 On their Concord release Polarity, these master players have crafted a unique two-guitar recital that differs substantially from most genre recordings by virtue of how different they sound from each other, and the manner in which they stay out of each other’s way-melodically and harmonically.

JazzTimes: Jimmy, can you tell me what a jazz guitar sound is?

Bruno: I can tell you what it’s not. Not having a ping sound come off of the E string; and not having the bottom too bright or the bottom too dark. That’s the ideal thing. And what happens with a lot of amps, is if you take the mud out from the E and the A strings, then you have glass on the D and the G in the middle there. I like to be able to play a four-note chord and get a solid, percussive attack, hear the bass note and the rest of them all separately and not just come out with this murky sound.

JazzTimes: Jimmy, I love your sound on Polarity. It’s so sweet and focused, unlike the dark sound so prevalent among many jazz players. Every note on every string is an event-it’s not all schmushed together.

Bruno:I think you’re right about that, because sometimes guys’ sounds are so dark, if they play a chord or play some stuff down in the low end, it all runs together. Of course, a lot of that quality you like is Bob Benedetto’s guitars. They’re the best in the world. They are so even. Every note on the instrument, on every string-even the seventh string; if I played it from the first fret to the 21st fret, every note rings. There’s no dead spots-and the whole guitar sounds like that. For Polarity, Bob Benedetto made me a 16-inch custom seven-string guitar. It has a different sound than my 17-inch with floating pickups, which is more like an old D’Armond kind of sound, where you get the sound of the guitar. This instrument is a little more pointed. It’s half electric and half acoustic, and for these duets, because Joe was all electric, I wanted to have some spot in the sound where we crossed over.

I played it through a Fender Acoustasonic Pro Amp, which is like 80 watts, I think, with two eight-inch drivers and a high-frequency horn. It looks like a small Twin, only brown. It’s solid state, but to me it has a tube sound. I mean, I couldn’t tell. The amp is really designed for guitarists with those piezo-electric pickups, and that’s where it really shines. But I tried one at a NAMM show, and I wasn’t playing very loud, and I said, “Damn, this is a great amp.” It got electric and acoustic sounds, and I thought, “Hey, if I don’t have to play loud, this is the amp to record with.” And it worked out just great on Polarity. I like the purity of the sound in that situation. I don’t really mess around with all the effects. I’m not an effects type of person. Just a little bit of reverb. So if I play a concert, and I know the sound person is really good, I’ll bring the Acoustasonic. If not, I’ll take a Twin Reverb. I can always get a good sound out of a Twin.

And I’ve been playing a lot of Fender Twin [Reverb] amps lately, because there’s a connection. You know that Benedetto has now licensed the Guild Custom Shop to build his guitars, and Guild is owned by Fender. So I’m using all of their gear and soon there’s going to be different Jimmy Bruno custom products such as strings. I have an .080 for an A, a .056 for an E, then going up the high E a .046, .036, .026, all round wound, then an .018 and .014, both stainless steel. And sometimes I make it a .015. Like I said, I don’t like that high E string to ping, like where you hear that high end slap against the fret.

Beck: Working with Jimmy, we wanted to have two distinct guitar sounds, because otherwise it just sounds like every other guitar duo, and you don’t know who the hell is playing anyway.

JazzTimes: Your Cort Joe Beck Model alto guitar really confused me. At times it sounded like you were playing a Hammond organ.

Beck: [Laughter] It’s pretty straight-ahead, really. Take your whole guitar and tune it down a fifth to the key of A, and then tune the middle two strings up an octave. What I’ve done is take the normal tuning of the guitar and changed it so that I have bass strings for my thumb; sort of a banjo register for my first two fingers, and then a low melody register for my other two fingers.

JazzTimes: It’s such a huge, evocative sound, with that big, gong-like low end and that shimmering top end.

Beck: I’m actually playing through three channels. The reason the guitar is a patented invention is that this pickup is split so that the bass strings have their own output. And the top four melody strings are coming out of another output, which in turn is split stereo by a chorus. The bass strings are .080 and .060. Then a .022 wound and a .016 plain. Then a .026 wound and a .018 plain. So you don’t have to change any of your fingerings; it’s the same intervals as in normal tuning, just in the key of A, so it’s A-D-G-C-E-A. I wanted to be more pianistic, to play clusters sort of like those Bill Evans employs, that you couldn’t possibly play otherwise.