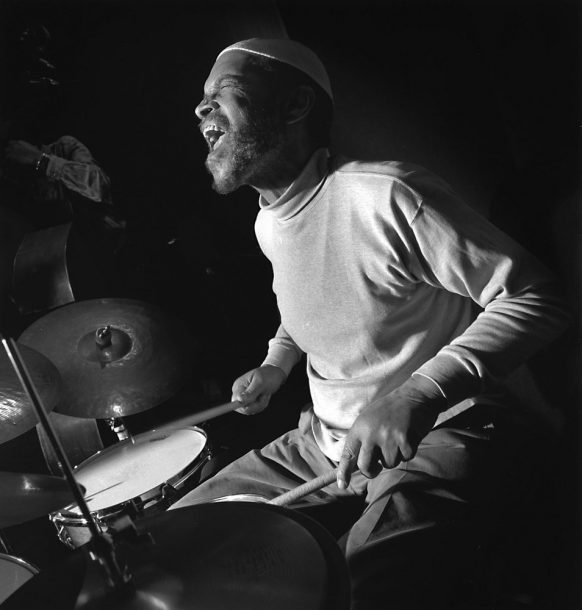 Few drummers possess a more distinctive sound signature than Billy Higgins. A true virtuoso of rhythm, texture and tone, he is among the most joyous, swinging drummers in the history of American music-and he’s a consummate team player. Coming of age in the late ’50s, Higgins cemented his reputation for musicality and versatility through a series of classic recordings with the likes of Ornette Coleman, Thelonious Monk, Sonny Rollins and Lee Morgan.

Subsequently, through a handful of recording dates that showcased him as a leader-most notably Soweto (Red) and Billy Higgins Quintet and Mr. Billy Higgins (Evidence)-Higgins further refined his shimmering cymbal pulse, dancing snare accents and wily bass drum syncopations into a sweetly textured wash of sound, and an indomitable groove so deep and pliant it seemed, on the surface, to be the essence of simplicity itself. But take a deeper look at his tumultuous polyrhythmic interplay with Don Cherry and Ornette Coleman on “Civilization Day” from Coleman’s The Complete Science Fiction Sessions (Columbia/Legacy) or his elegant, gospelesque chants alongside Charles Lloyd on “Heaven” and “There Is a Balm in Gilead” from the tenor saxophonist’s most recent ECM release, The Water Is Wide, and you’ll see that while there isn’t much smoke, there is plenty of fire-a controlled burn by a master orchestrator who understands how to create a captivating musical atmosphere, beginning with the sound of his favored ride cymbals.

“I switch up between a K. Constantinople and an old Paiste 602 Medium Ride,” says Higgins. “That old Paiste was given to me by Ed Blackwell, so it has a special thing going for it besides its sound. There’s a vibe to it, and I’ve made a lot of very good recordings using that particular cymbal.”

JazzTimes: Do you always favor rivets in a ride cymbal?

Well, yeah, because it gives everybody a cushion. I remember working with Milt Jackson, and sometime if a cat didn’t have a sizzle cymbal, he wouldn’t hire him [laughter]. Because you’re always playing it, it gives a lot to the player and the ensemble, too-it’s like the maître d’ of the drums set. You might never touch a tom-tom, but that cymbal is a big part of your sound.

JazzTimes: I understand why guys go for a relatively dead kick when they’re playing with electric bass and electric keyboards, but otherwise, everything is supposed to be feeding into each other, like a voice.

Well, that’s what rhythm is about. With them pillows and holes, that’s different, because then you can hit it as hard as you want to hit it, and it doesn’t take you totally out, but with acoustic music it’s unheard of. Then it doesn’t have anything to do with the rest of the drums. It’s not a family.

JazzTimes: Not all musicians hear the drums as a musical instrument, and it seems as though all the great drummers are fanatical about tuning. Jo Jones told me that when they were with Basie, Eddie Durham would rehearse each section separately and the rhythm section by itself. He’d put his head right next to the bass drum, and when it rang sympathetically with the bass fiddle’s G string, then they were in tune.

He sure knew how to play the bass drum, Papa Jo did. He was a master of feathering the bass drum so you didn’t hear it when the bass was playing. When he played in 4/4, you didn’t hear the boom-boom-boom-boom, because he would be pedaling it, just barely touching the head at all-but you still felt it. The bass drum should be felt and not particularly heard in that way, because you can knock the bass right out of commission. You have to feather the bass drum in a certain way, because if you don’t hit it right, it will stop the note of the bass. You know how long a bass note lasts? Not that long, but all of it is connected. So if you disconnect one note, you’re going to disconnect two notes, then the shit is all discombobulated. You have to handle that with care, and sympathy.

JazzTimes: So you’re more concerned with shadowing his notes than matching them?

You have to learn how to isolate-without isolating. Each component on the drum set is different; to make them all sound as one-where each voice gets its own due-that’s the whole secret. That’s why I use an 18-inch bass drum. I’ve also got a 16-inch. It’s all on how you tune it, man-that’s the whole thing. I can get a great big sound from either of them, because I tune them wide open so it’s just like the rest of the drums. If you muffle one drum, then it’s not in the family any more and you can’t get the pure notes out-it doesn’t connect to the human ear, the human heart or the human being like that. There’s something to be said for pureness of intent; otherwise, you might as well be somewhere else where nobody is listening.

JazzTimes: Are your batter heads on your bass drum coated Ambassadors?

Yeah, front and back-and no muffling. I have an old Gretsch set that I’ve kept over the years, but these days, wherever I go I’m using Remo’s wood drums. Just standard sizes [8 inches x 12 inches, 14 inches x 14 inches, 14 inches x 18 inches], and generally an 8-inch [x 14 inches] Ludwig metal snare. But no matter what’s waiting for me, if I can get to the drums and tune ’em, I can get through the night. It’s a drag when you’re trying to play and you can’t get the sound you’re hearing. And then you’ve got all the microphones to deal with, too, especially in a big setting. Now if you’re in a space where they ain’t got mikes all up the yin-yang, then you can hear the instrument; but it’s hard to hear the instrument when you got all those separate mikes on each separate instrument, because you’re not getting the true message-then you get a separate sound. One mike on the top can get everything. I don’t think engineers understand that the drums are being played like that. “Well, I can’t hear this,” so they put a mike on the sock cymbals or they put a mike in front of the bass drum. And that’s not where it’s at-the idea is to capture the whole set of drums. And the way you capture the whole set of drums is to use one mike and let the drummer zero in on what he’s thinking about. He’s not going to play anything that you’re going to miss, because these days the mikes are so good now, they’ll pick up the smallest, most delicate sounds-it’s the projection. Because I’ve gone into places and before I’ve played I tuned the drums up with no mikes at all-beautiful. “Man, this is a really nice hall.” But as soon as they stack you with the mikes, man! Then it’s harder to get to the sound of the room, because you don’t know where it’s at-you’re guessing.