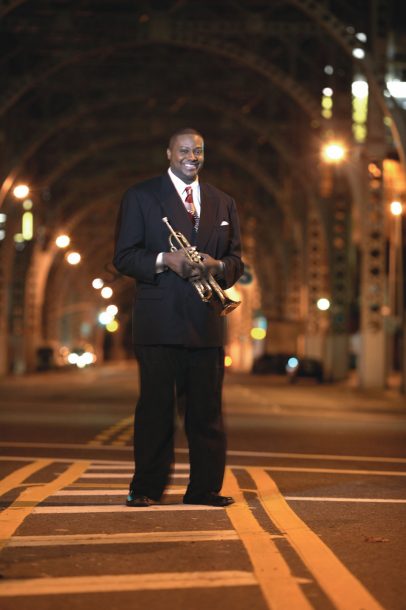 In the summer trumpeter Sean Jones was in England, where he was touring with the Lincoln Center Jazz Orchestra. Upon returning to his home in New Jersey, he resumed work on a doctorate at Rutgers University in classical trumpet, a follow-up to his masters in jazz performance from the same institution. He also had to prepare for full-time work at Duquesne University, where he’ll lead the jazz ensemble program, teach jazz history and give private lessons. “I won’t really have a home base,” Jones says. “I’ll have two different places: a place in New Jersey and a place in Pittsburgh. So I’ll spend a lot of my weekends in the New York area trying to maintain those gigs.”

Born in Warren, Ohio, Jones plays with a bright, crisp tone that evokes the influence of Clifford Brown and Freddie Hubbard, combined the melodic invention of players like Woody Shaw. Eternal Journey (Mack Avenue), his debut as a leader, reveals him as a focused bandleader equally skilled in composing and reinventing classic material. He composed the somber “John” after waking from a dream about his father, who tragically died a few hours later. A similar situation inspired the reharmonized version of “Somewhere Over the Rainbow,” which Jones describes as sounding “peaceful yet uncertain.” But along with these more reflective tunes, Eternal Journey also contains plenty of high-flying moments, such as “At the Last Minute,” where drummer Ralph Peterson lights a fire beneath the rest of the quintet. On Curtis Fuller’s “Gullyism,” Jones says he and the drummer “were completely feeding off each other. The changes weren’t as important as the dialogue that we created together.” Eternal Journey also includes bassist Charles Fambrough, saxophonist Tia Fuller and piano duties split between Orrin Evans and Mulgrew Miller.

Mack Avenue approached Jones about leading a session after he played on the Gerald Wilson Orchestra’s Grammy-nominated 2003 album New York, New Sound album, which included his solo work on Wilson’s “Nancy Jo.” That followed appearances with the Chico O’Farrill and Illinois Jacquet Big Bands as well as with smaller groups such as Fambrough’s, which marked his recording debut. The different settings have helped him realize his purpose as a musician. “I play and perform and compose so the human experience can be brought out through music,” Jones says. “I want to be able to reach as many people as I can and make them feel better.”