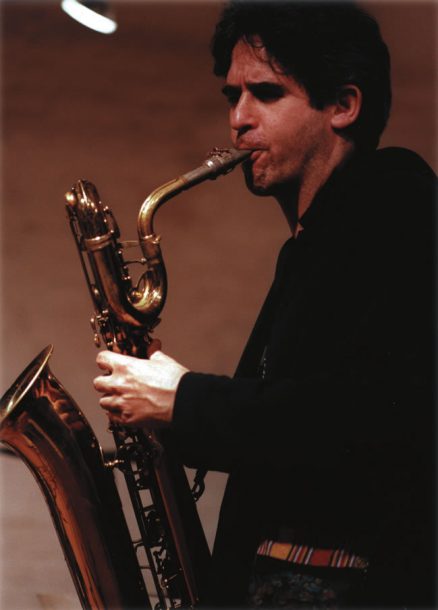 When it comes to making records, composer-saxophonist Tim Berne has done it all. His idiosyncratic take on post-Coleman jazz first gained notice during the late ’70s-early ’80s heyday of artist-operated labels via five titles issued on his self-produced Empire label. A short, yet fruitful two-date association with Soul Note coincided with the Empire release of …theoretically, Berne’s watershed ’84 duet album with guitarist Bill Frisell.

An inexplicable corporate mindset spasm then led Columbia to sign Berne; at that point in his career, it was “a good experience in terms of having enough time in the studio to make the record you want,” Berne recently relayed. Recovering in short order, Columbia unceremoniously dumped him after two albums, a move “so expected that it wasn’t lethal” (Koch Jazz performed a civic duty by reissuing ’87’s Fulton Street Maul and Sanctified Dreams). Fortunately, Minature, Berne’s co-op trio with drummer Joey Baron and cellist Hank Roberts, had already hooked up with Stefan Winter, producer for the then- independent JMT label, which paved the way for an extraordinary ten-disc collaboration that produced at least one bona fide contender for classic status, ’92’s Diminutive Mysteries (Mostly Hemphill).

Yet, all good things end; the rub is that they sometimes end badly, which was the case with Berne’s relationship with JMT. The turning point was, according to Berne, a distribution deal with Polygram “that always seemed to be mysteriously ineffective.” Berne, however, accepted the situation as the trade-off for decent budgets and artist Steven Byram’s elaborate, mind-altering covers. Then, things began to unravel way beyond garden variety hassles over mailing promos and targeting ads; titles began to go out of print; Winter then sold the label to Polydor without notifying Berne; and, due to inscrutable machinations, Berne ultimately found himself shut out from licensing his own recordings, which now languish in the vaults.

“What really hit me was that the only way I can protect myself is by doing it myself,” Berne concluded. Buttressed by the take-it-to-them urgings of Tzadik tsar John Zorn, Berne decided in August, ’96 to start a new label, Screwgun. Berne was convinced that “this whole industry mentality that you have to conform to sell records just isn’t true; in fact, the exact opposite is true.” So, Berne made the bold move of inaugurating Screwgun with Unwound, a three-CD set by his flinty quartet Blood- count (with reedist Chris Speed, bassist Michael Formanek and drummer Jim Black), complete with an intricately folded, Byram-designed, cardboard cover. “The original idea was to do it all through the mail and put out the rawest stuff and do it as an authorized bootleg thing. But, then I approached a few distributors who instantly said, ‘Great, we want it.'” It’s noteworthy that Berne’s distributors-Carrot Top, Forced Exposure, FTC, North Country and Revolver-reflect the intersecting markets for out jazz and avant rock. “All of them, even the ones that are essentially rock distributors, are into the music. They’re not just saying, ‘Hmmm, we can sell this.’ They’re really enthusiastic, which is important to me.”

It’s too early to crunch the numbers on Berne’s subsequent Screwguns-Bloodcount’s Discretion and Visitation Rites by Paraphrase (Berne, bassist Drew Gress and drummer Tom Rainey); Berne has also started “The Short Term Success Series” of $10 available-only-through-mail-order CDs with Bloodcount’s Saturation Point. But, the breakdown of the robust figures for Unwound are revealing, as distributors account for only about two-thirds of sales (and over 2,500 copies and counting in the first year for a three-CD set of raucous original music is robust in the current flooded market).

Given that credit card orders cannot currently be made through the Screwgun web site (http://www.home.sprynet. com/ sprynet/ssmith36/mainpage.htm) and that the main source of postcard mail order forms are the CDs themselves, it’s not surprising that only about a few hundred have been sold through the mail.

The remarkable stat is that CDs sold at gigs make up a solid 20% of total sales. This validates the point Berne emphasized at last year’s JazzTimes Convention panel on marketing avant garde music: when it comes to energizing an audience to buy CDs, nothing beats a gig.

Berne’s initial success has also reinforced his thesis that while the majors can get a CD into the national chain stores, that doesn’t guarantee that a real person will plunk down real dollars to buy it. “This has put me more in touch with people who actually buy this music and come to the gigs. These are the people I make these records for. I’m convinced that most record label people don’t have a clue about who they are, because most labels do what they do based on what industry people tell them and not fans, or the guys at the record stores who sell the stuff.”

Though the left brain-dominance necessary to run a label occasionally cramps his writing, Berne is expanding Screwgun’s scope to include new solo discs by guitarist Marc Ducret and Formanek, a reissue of the rare Julius Hemphill LP, Blue Boye, and a box set of Berne’s Empire albums. “The productions can be a nightmare. The covers aren’t simple, there are all these inserts, so there’s a lot of people doing different things. Pressing plants don’t know what to do with the covers; they’re used to simple jewel boxes. I always run into snags and I end up taking care of it from the road while on tour. That’s the worst part. The rest I can handle, because I get up early and go to the post office a lot, anyway.”