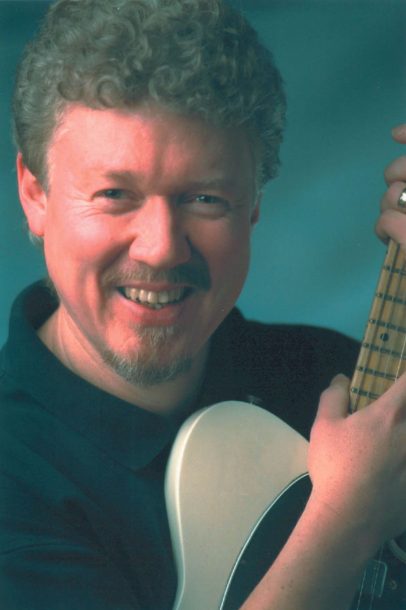 Like guitar greats Jimmy Bryant, Hank Garland, Joe Maphis, Lenny Breau, Roy Buchanan and Danny Gatton before him, six-string hotshot Scotty Anderson is a little bit country, a little bit jazz and a whole lot mind-boggling. On his debut for J Curve Roots and Blues, Triple Stop, the fingerstyle virtuoso from Park Hills, Ky., scorches the fretboard of his ’68 Fender Telecaster with jaw-dropping technique as he blazes through a wildly diverse set that includes Baby Face Willette’s B-3 burner “Jumpin’ Jupiter,” Stan Kenton’s “Artistry in Rhythm,” Horace Silver’s “Nutville” and Frederick Steiner’s “Theme from Perry Mason.” Throw in a Chet Atkins-meets-Django Reinhardt rendition of “Sweet Sue,” a beautifully lyrical reading of Elvis Presley’s “Love Me Tender” and an unaccompanied, Merle Travis-styled version of the traditional “John Henry” and you’ve got an astounding collection of licks, tricks and sheer chops by one of the fastest, most original guitar pickers today.

The 47-year-old Anderson has maintained a kind of cult status among other guitar slingers over the years. In 1985 he released his first album, Sleight of Hand, on the regional Magnum label and in 1991 filmed an instructional video, Red Hot Guitar, for Arlen Roth’s Hot Licks company. Since then he’s done clinics and made appearances at various NAMM shows and folk festivals for the National Council of Traditional Arts, while also terrorizing the bar scene around his tri-state stomping grounds of Kentucky-Ohio-Indiana; all of which has led to Scotty being named recently by Guitar One magazine as one of “America’s 10 Best Unknown Guitarists.”

A fingerstyle player who since age 14 has utilized a thumb pick for some of his lightning fast chromatic runs, Anderson grew up in a musical family and soon gravitated to the godfathers of fingerstyle playing, Chet Atkins and Merle Travis. Other early guitaristic influences came from the TV. “The first time I ever heard anybody play jazz that I was aware of was on the Perry Mason show, ” he recalls. “It was probably Barney Kessel or somebody. Then the first really interesting single-line playing that caught my ear was from an old comedy-western show called Laredo, around 1968. Every time there was a fast horse scene or a fight scene, somebody was just tearing out on the guitar-probably either Howard Roberts, Tommy Tedesco or Jimmy Bryant.” Scotty currently draws inspiration from the likes of George Benson, Pat Martino and Jimmy Bruno.

“I spent a lot of time playing clubs doing Top 40 stuff, country and dance music,” he says, “all the while loving jazz music and sneaking a few songs into the set-getting by with just trying different stuff enough to pacify my jazz curiosity. Since I loved Chet’s style so much and my uncle played thumb style too, I always thought if I could fuse that with the freedom of jazz improvisation, that would be all that I would ever want to do, really.”

After 30 years of doing precisely that, he’s honed his chops to a razor-sharp edge, as evidenced by his dangerous playing on Triple Stop. “I’ve never given up the idea of selling what I do to players and nonplayers alike,” he says. “To me, if I had my druthers, I’d have a roomful of people enjoying what I’m doing. If they play guitar that’s great, if they don’t that’s fine too, as long as they enjoy it. But it seems like a lot of guys get into this isolation type thing. They feel like if the public likes it they must be doing something wrong, you know. But I’m trying to strike that balance. I know Chet did it, and other players do it too. Like the saying says, ‘To thine own self be true.’ If you like it, get behind it, sell it and somebody else will like it.”