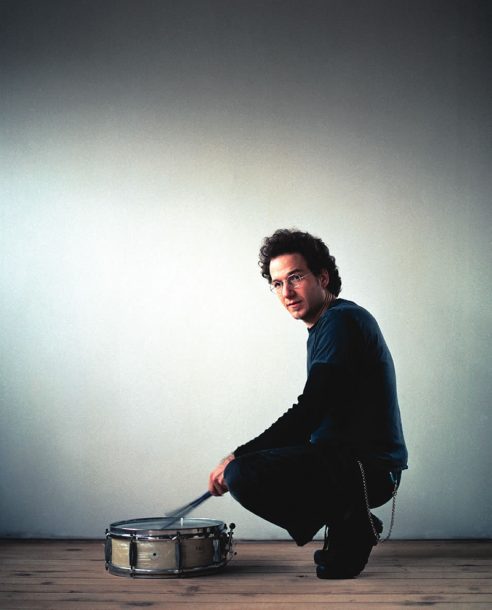 Scott Amendola’s latest album is called Believe (Cryptogramophone), but the Oakland-based drummer has been making dedicated converts for more than a decade now. Since first gaining national attention with Charlie Hunter in the mid-1990s, Amendola has established himself as a vital creative presence on the West Coast, bridging improvised-music scenes from Los Angeles and Seattle to Chicago, New York and beyond. A supremely flexible musician, he has thrived in a wide array of musical settings, from spacious electronic soundscapes to insistently grooving organ combos. His new release documents some of his most bracing writing yet, combining long, lean lines with crackling guitar work and his judicious use of pedal board-generated noise, distortion and real-time percussion samples. Featuring two of the drummer’s longtime collaborators, guitarist Nels Cline and violinist Jenny Scheinman, along with Bay Area bassist John Shifflett and Chicago-based guitarist Jeff Parker, Believe alternates between extended Neil Young-ish anthems and gorgeous West Coast jazz sonorities.

“I feel like my whole thing as a leader has been about trying to put all this stuff together,” Amendola says. “This band is just strings and percussion-myself with acoustic bass, violin and two guitars. Without the saxophone it took a certain jazz element out, but then Jeff is really a jazz player with an experimental side. Everybody was into the whole range of sounds-the jazz thing, the noise thing-yet it’s also really melodic.”

In many ways, Cline has been central to Amendola’s sonic evolution in recent years. While best known now as an aural provocateur in the alt-rock band Wilco, the guitarist has been a revered figure on the L.A. music scene for more than two decades. A volatile player who can move from thrash distortion to sweetly chiming harmonics within the space of a phrase, Cline has nurtured the forceful rock edge in Amendola’s sound while also encouraging his experiments with electronics. They first started playing together in the free-improv ensemble Stinkbug back in the mid-’90s. Their musical connection deepened when the guitarist started a new group to play his expansive compositions, the Nels Cline Singers, a band that has released a couple of beautifully spooky sessions on Cryptogramophone. Their combustible chemistry surfaced on Amendola’s 2003 Cryptogramophone debut Cry, but for Cline the drummer’s surging creative energy was apparent at their initial encounter. “The first time I heard Scott I was really blown away,” Cline says. “There aren’t too many drummers on the West Coast who have his wide-ranging ability. Scott’s got some funk in him-a looser, sexy thing going on-and the flexibility to play free and different styles.”

Since Cline is now spending most of his time on the road with Wilco, Amendola took his band in the opposite direction, exploring the transparent, unplugged dynamics of a chamber ensemble. The latest incarnation of his group, a quartet called Chambers of Grace, features Shifflett on bass, pianist Art Hirahara and violinist Jenny Scheinman. The band’s book is similar to his old quintet, with instrumental covers of songs by Jimi Hendrix (“Manic Depression”) and Fela (“This Is Sad”) and the occasional spiritual (“His Eye Is on the Sparrow”). But the band’s repertoire is made up mostly of Amendola’s engaging original tunes, pieces that are so well crafted they can work as high-velocity fusion or as gentle, folklike themes.

“Scott’s charts are extremely simple, which is why they can be played by these different groups and still work,” says Scheinman, whose career has flourished through her work with guitarist Bill Frisell and pianist-composer Myra Melford since she relocated from the Bay Area to Brooklyn six years ago. “His compositions have very strong and clear and accessible melodies. Every tune is based on a drum part that he really enjoys playing, and when Scott’s happy there’s so much joy coming out of him.”

In recent months Amendola has been out on the road with Madeleine Peyroux, but he continues to maintain several strong cooperative ensembles. There’s the hard-grooving trio with guitarist Will Bernard and rising Hammond B3 practitioner Wil Blades, and there’s Plays Monk, a captivating repertory trio with clarinetist Ben Goldberg and bassist Devon Hoff. “We’ve created certain moods for tunes, more than developing set arrangements,” Amendola says. “What really makes the trio its own thing and opens up possibilities is the lack of a chordal instrument. We’ve all played and listened to Monk so much. You can really study that music for a lifetime.”