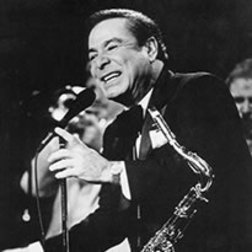 Born in New Orleans, La., Butera eventually earned acclaim honking in a mid-century jump style that wed swing to R&B, but was influenced early on by jazzmen like Lester Young. While in his teens and twenties he played in the bands of Ray McKinley and Tommy Dorsey, respectively, and, inspired by R&B maven Paul Gayten, formed his own band that held a four-year residency at New Orleans’ 500 Club.

In the mid-1950s he was offered a job with Louis Armstrong but opted to move to Vegas, where he backed Prima at the Sahara Hotel with a group Butera named the Witnesses. The collaboration yielded a singular style of lounge entertainment that combined zany humor and adlibbed banter with jazz, jump blues and R&B, captured on the essential 1957 recording, The Wildest! (Capitol). Butera appeared with Prima and Smith in Hollywood films including 1958’s Senior Prom, 1959’s Hey Boy! Hey Girl! and 1961’s The Continental Twist. Butera also appeared as “Carl,” a musician character, in the 1960 Tony Rice/Debbie Reynolds film The Rat Race.

He continued working with Prima until the vocalist-trumpeter’s death in 1978, after which Butera began singing more, leading his own band through Prima standards like “Jump, Jive an’ Wail” and songs associated with the Prima act. Among those tunes was “Night Train,” the 12-bar blues on which Butera owned the saxophone. Another staple of Butera’s show was his classic arrangement of “Just a Gigolo” and “I Ain’t Got Nobody.” (As the New York Times reports, Butera was upset with singer David Lee Roth, who lifted his arrangement and scored a pop hit with it in 1985, never paying Butera any royalties.) With his band the Wildest, Butera released a few albums for the Jasmine label in the mid-1990s. He retired from performing five years ago.

A crowd-pleaser throughout his career, Butera’s appreciation for his audience was palpable. “I love ’em,” he said in a 1999 radio interview. “I try so hard, each show, to make [the crowd] happy.”

Butera is survived by his wife, Vera, four children, eight grandchildren and one great-grandchild.