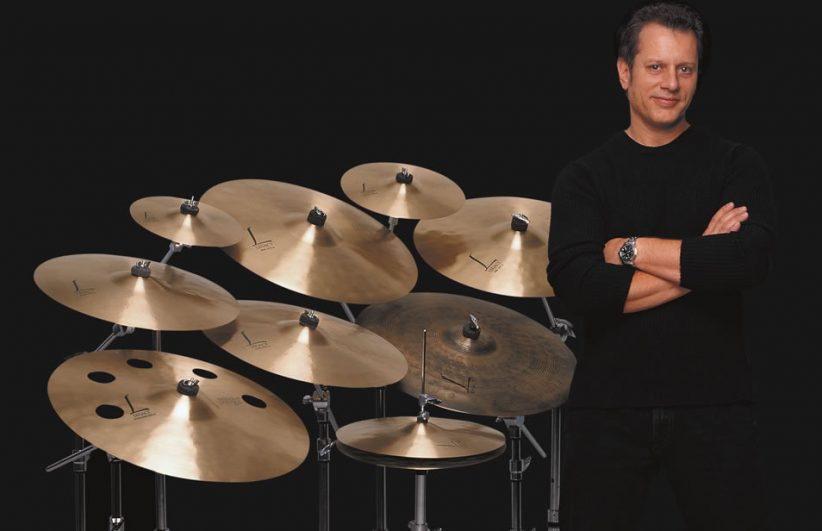 In 2002, Sabian collaborated with Dave Weckl to create the Canadian cymbal company’s Evolution line, a series that made quite a splash when it debuted on the market. The Evolution line includes the totally cool O-Zone crashes, cymbals that feature six large holes piercing the circumference of the cymbal. But the Evolution cymbals weren’t just visually striking; they had a brighter, thinner tonality than many expected from the Weckl-Sabian collaboration.

I’ve always enjoyed the rich, complex sound of Sabian’s HHX cymbals, and I was curious how the new Legacy cymbals-the latest Weckl-Sabian team-up-would fit into the HHX line. Sabian says that the Legacy series represents the darker side of Weckl’s sound, and that appeals to me. Sabian sent me nine cymbals and a pair of hi-hats to check out.

First up were the two splashes from the line, a 10-inch and a 12-inch. Straight off the bat, I could tell that, yes, this line has a dark tone. Visually, these aren’t flashy compared with the highly polished Evolution cymbals. Like all the Legacy cymbals, they have a noticeable hammering pattern across their unpolished surface, a large “L” logo and Dave Weckl’s signature on the underside of the bell. These thin splashes easily flex between your hands. Hit softly, the 12-inch model offers a dark, trashy wash-a vaguely Asian sound-while the 10-inch has a similar quality, but higher pitched with a lingering overtone. The 10-inch is more like what I expect from a splash, yielding dark and short explosions. The 12-inch can also work as a small crash in low-volume situations, since it has no noticeable overtone. Both decay smoothly, but due to their thinness, they won’t project compared with a rock-oriented splash.

Currently, just one model of hi-hat is offered in the Legacy line, a 14-inch pair of dishes that aren’t labeled “top” and “bottom” but are easy to tell apart (the bottom cymbal has the logo printed on the inside of the cymbal, while the top cymbal has it on its outer surface). Though the bottom cymbal is fairly thick, the hi-hat’s “chick” sound isn’t particularly loud but should suffice for most medium- and lower-volume gigs. If you front a big band, they might not cut through as well as hi-hats from other Sabian lines will. Splashing the cymbals gives off a nice tone, with a bit of initial brightness that gradually is overtaken by the cymbal’s darker undertones. The cymbals are medium pitched and sound good with uptempo, “spang-a-lang”-type patterns.

The 17- and 18-inch Legacy crashes have a very dark, mysterious and rich character that’s truly their own. Hit softly, they ring low and their potential trashiness is kept in check. Hit moderately or hard, they burst with a dark, Eastern-tinged wash of white noise-the 18-inch model’s burst is especially pronounced. They responded generously to mallet rolls, and have very deep-pitched bells. Both recall some of Sabian’s HHX Extreme crashes, but these have more trashiness and complexity. They’re not your generic vanilla crashes, and I love ’em both.

The Legacy cymbal that everyone’s talking about is Sabian’s 20-inch O-Zone ride. Like its counterpart in the Evolution line, it’s outfitted with holes, but there are just five of them and they’re cut along only half the cymbal’s circumference. Playing in and around the holes didn’t reveal any sonic novelties, but playing the cymbal straight produced a unique deep, dark, trashy tone that just builds and builds and builds. When played fast, it almost sounds a little like someone is lightly rolling on a gong somewhere else in the room. Its bell sound has more overtones than definition, so I wouldn’t choose it for a Latin number, but it crashes well and easily if you’re one to lay into your ride.

As the Legacy line’s theme has now become apparent, the 20- and 21-inch rides, naturally, have a deep pitch and dark tonality. The cymbals’ build is noticeable, with the amount of roar more pronounced in the 20-inch model. Each of these rides gave wonderful, rich and dark crash tones and sound wonderful when playing mallet rolls. The 20-inch model felt less like a ride when playing fast, moving under my sticks in a way similar to the way a crash will when you ride it. For that reason I preferred the 21-inch model, and also because it offers better stick definition.

Labeling a ride “heavy” may seem like peculiar marketing for cymbals targeted at jazz drummers, but the 22-inch Legacy Heavy ride and 22-inch riveted Legacy Heavy ride aren’t brilliant, mega-bell heavy rock rides with little to offer other than a “ping” that can cut through a Marshall stack. In fact, both these cymbals have a dry character with interesting overtones. Their pitch is low and their roar is controlled-they never get out of hand. They keep a defined stick attack at all times, making them great cymbals for uptempo playing, when time needs to be defined by a ride pattern. They also had excellent bells, making them versatile cymbals that are good for Latin tunes and for drummers seeking an all-purpose ride. The riveted version includes three rivets, a little more than an inch apart from each other, opposite the striking area. The rivets lengthen the cymbal’s decay and add a bit of high-pitched sibilance to the wash. These rides are a bit big to crash, but have a nice deep tone if you do.

The Legacy cymbals are uniformly excellent. Both the hi-hat and rides are definite improvements over the thinner and washier offerings in Sabian’s Evolution line. While the Evolution crashes are very good all-purpose cymbals, these new Legacy’s are definitely darker and much more unique. Think of this line as the evil twin of the other, and you might get an idea of the complex, dark, rich flavor these new cymbals offer.