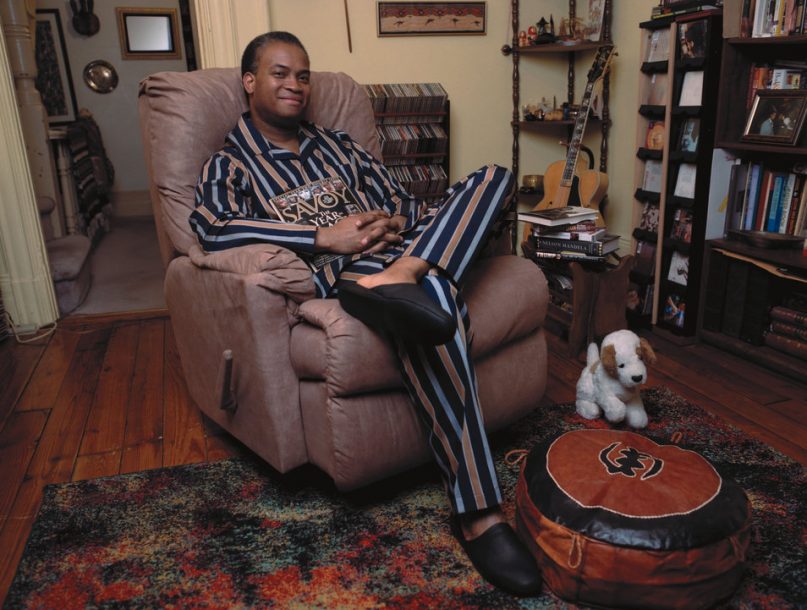 I love being at home,” says Russell Malone, sitting in the living room of his three-floor row house in Jersey City, N.J. “I got everything I need here at home, man. I got plenty of food, plenty of water, plenty of toilet paper. I don’t have to go nowhere.” This is coming from a guitarist who spent over 300 days on the road last year. But no doubt, Malone keeps a cozy pad with Marlene, his girlfriend of 10 years. He’s lived in Jersey City, just a hop across the river from midtown Manhattan, ever since he relocated from his native Georgia in 1994. (His son and daughter, age 15 and 11 respectively, live with their mother in Nebraska.)

Upon entering Malone’s home on the first floor, I doff my shoes on request and see a number of Malone’s guitars and amps, two Diana Krall gold records, a foldaway treadmill and so on. The eat-in kitchen is straight ahead and to the back. Upstairs on the second floor is a stylish living room as well as a sizable office and a half-bath. On the third floor are two bedrooms and a full bath. Malone is fairly meticulous about keeping the place clean. “I might kick my shoes off and leave them on the floor for a day or so,” he allows. “But two things I cannot tolerate are a funky bathroom and a funky kitchen.”

Malone is more of a guitar freak than a neat freak, however. As soon as he confirmed that I, too, was a guitarist, he was only too eager to let me handle every instrument in the house. Later he put on recordings by George Van Eps, George Barnes, George Benson and even free improviser Joe Morris. “It’s hard for me to find a guitar player I don’t like,” he says. “I love hearing the guitar played well, and it doesn’t matter what style it is.”

But perhaps even more than listening, Malone loves to play. Before I left the house I ran the gauntlet and jammed with him, for close to an hour. The musicality and sheer brawn of Malone’s fretwork can be overpowering. His time feel is as solid as the very best drummers’. If he had one hand and I had four, Malone would bury me. But the mood in the room was exuberant, the vibes entirely positive. There was a utilitarian aspect to our session as well: Malone had been sick and needed to get his chops back. “I’m playing tomorrow with that maniac, Benny Green,” his partner in the new duets disc Bluebird (Telarc).

The past several years have seen a slimmer Russell Malone. “I was in the hotel one night and I looked in the mirror and my gut was so big it looked like someone was walkin’ in front of me.” After getting advice and inspiration from saxophonist and friend Vincent Herring, Malone went on a modified version of the Atkins diet. “Now I’m down to the size I was when I was 20. But if I want to indulge in some sweet potato pie or some vanilla ice cream, certain things I’m not going to deny myself.”

Malone has amassed a formidable discography for a 40-year-old. Recent standouts include two drumless trio recordings, The Golden Striker with Ron Carter and Mulgrew Miller (Blue Note) and Ray Brown, Monty Alexander and Russell Malone (Telarc). After stints on Columbia and Verve, Malone debuted on MaxJazz in March of this year with Playground, featuring pianist Martin Bejerano, bassist Tassili Bond and drummer E.J. Strickland, with special guests Gary Bartz and Joe Locke. “I’m so fortunate that I’m playing music that I like,” Malone says. “I’m playing with some great musicians, and I’m improving all the time. I can look back as recently as a year ago and see where I’ve gotten better.”

A 2000 Toyota Camry, burgundy. “The one before that was a Toyota too. I take the train every now and then but I like driving because it’s very comfortable. I’m more relaxed when I drive because that’s where I do most of my listening.”

Mr. S: My Life with Frank Sinatra, by George Jacobs. “He was Sinatra’s valet for 12 years. Sinatra’s a very fascinating character, and it’s interesting to read about him from the perspective of an African-American. There’s lots of juicy stuff in there.” Malone also pulls out Martin Meredith’s biography of Nelson Mandela and a couple of volumes by Ralph Wiley. But he pauses over a book called Bullwhip Days, edited by James Mellon. “I’m going to give this one to my kids when I die. It’s a collection of interviews with actual slaves, people who survived slavery, and they tell what it’s like.”

“PC, a Compaq. I pay all my bills on the computer and check my e-mail, and every now and then I like to surf.”

“I got weights over there, a treadmill downstairs. This thing here, it’s some sort of abs machine. I use it to prop up my guitars.”

“I love movies. I saw The Passion of the Christ and Starsky and Hutch because I was such a big fan of that show. I liked the movie with Diane Keaton and Jack Nicholson, Something’s Gotta Give. It was great to see a movie where older people fall in love. I go out to movies; I almost never rent a movie. I’m old fashioned. I like the experience of going out, taking someone and sitting back in a theater.”

“I eat everything that Noah had on the ark,” Malone chuckles, although he admits to a phobia of raisins. “I had a bad experience. I must have been about four. A guy came to visit my dad, and he was eating raisins. So I put my hand out, and he gave me a handful. I put them in my mouth and threw up on the spot.”