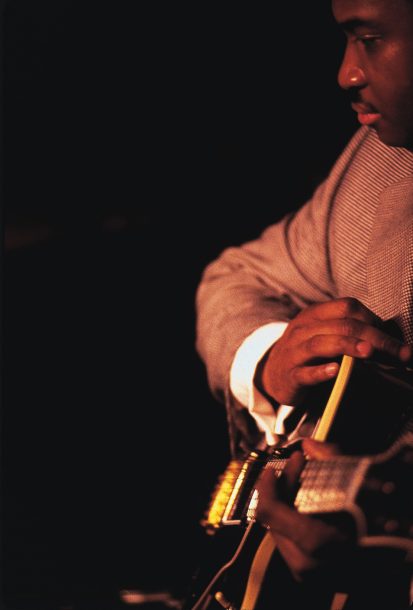 He has a sumptuous tone, impressive facility and a certain joie de vivre. Indeed, wherever you find Russell Malone, whether it’s in a club or on television (he’s frequent guest on BET On Jazz) or on the silver screen (recall the stogie-chomping guitarist in the Robert Altman film, Kansas City?), or on the CD player, he’s a pleasure to be around. There’s no pretense here.

Following the release of his initial CD for Impulse!, titled Sweet Georgia Peach, we caught up with the busy plectrist at his New Jersey home during a brief lull in his road warrior schedule. Sweet Georgia Peach, an agreeable bit of business full of elegant swing and optimism, bears Malone’s melodic signature, something he’s worked hard to develop.

“On any date I try to be as musical as possible,” says the Georgia native. “I wanted to really put emphasis on my writing on this particular date, plus I’m older now than I was when I made my other two records, so hopefully a certain maturity will come across.”

Working with such esteemed musicians as Ron Carter, Kenny Barron, and Lewis Nash was clearly a good start. “Ron called me for a couple of gigs when I moved to New York, plus he’s one of my heroes. Kenny Barron is another guy that I always admired and I had gotten to play with him when Bradley’s was still open. Lewis and I had worked on a couple of dates, so there’s a mutual respect among the four of us. When you get a group of guys who respect each other, not only as musicians, but as human beings, it’s not impossible to get a particular group of guys like that together. We had a good time!”

A native of Albany, GA, hard by the Florida border, Malone’s musical odyssey followed the well traveled path up through the church. “Albany is a very small town and jazz music wasn’t that prevalent,” he recalls, “but I heard a lot of gospel music and I snuck and listened to blues music. The first guitar solo I ever heard was from a song the Dixie Hummingbirds did called “Standing By The Bedside of My Neighbor”. I remember learning that solo when I was about six years old. I got turned on to the guitar when I was about four because one of the guys in the church used to play it every Sunday and I’d stand over in the corner and watch him.”

Soon Malone’s perceptive mother bought him a plastic guitar, which he’d dutifully tote to church service every Sunday until one day the guitarist he’d been eyeing showed him how to pluck out a chord. “I’d take that guitar and strum that chord all day, and you couldn’t tell me that I wasn’t playing,” he laughs. “I eventually started playing in the church a couple of years later.” The televised specter of B.B. King cast a spell over him; later he was really turned around by the small screen image of George Benson. “I saw George Benson on television when I was about eleven or twelve, performing with Benny Goodman on Soundstage. That really blew me away because I’d never heard jazz performed on the guitar before! I admired the way he was playing a big hollow-body guitar, and I’d never seen one of those before, plus the guys were smiling and having such a good time and there was so much joy and fun in the music; plus the sound, the tone, just everything about what he was doing I was totally fascinated by.”

Summer earnings from mowing lawns yielded precious record collection dollars for the 12-year old Malone. The George Benson Cookbook became his first jazz purchase, followed quickly by Benson heroes he read about in the liner notes, Wes Montgomery and Charlie Christian. The jazz giants, from Duke Ellington to John Coltrane, soon entered his consciousness and Malone became thoroughly immersed in the music. After high school he moved to Houston, eventually touring with funky organist Al Rylander. In ’85 he moved to Atlanta, working a city circuit he found more fertile than it gets credit for, and he garnered blues and R&B gigs on the side. One evening three musicians on the road with Sting, namely Branford Marsalis, Kenny Kirkland, and Darryl Jones, came to a club where Malone was working, sat in, and Marsalis encouraged a move to New York. Dipping his toes in the water one at a time, Malone made frequent forays to New York to check out the scene, eventually getting gigs with Jimmy Smith, and Harry Connick, Jr.

In ’94 Malone finally made the move, after cutting two discs for Columbia (Russell Malone and Black Butterfly). Each received good notices. Linking up with pianist-singer Diana Krall was pivotal. “Diana and I met at Bradley’s. I was playing there one week with Mulgrew Miller and Peter Washington. At that time she was starting to work on the record she dedicated to Nat King Cole and she was looking for a guitarist. I had already worked with Freddy Cole for a few months, and he got me into really paying attention to phrasing and listening to singers, so I was very familiar with that style. [Diana] called me for a record date, but first we toured for a while. What was so good about that situation was that we were playing songs, I mean great songs.”

Clearly Malone and Krall have achieved a high level of simpatico. “It works, we both share the same musical philosophy, we both like songs and we both love melody, plus one of the things that I would love to see is musicians show more respect for singers.” Certainly the Krall and Cole gigs have broadened Malone’s outlook on singers. “The voice is the first instrument, but there are so many singers who want to sound like musicians. I don’t have anything against scat singing, but there’s something to be said for being able to just sing a song. My favorite singers never scat sang, they always got something out of a lyric, they told a story. Carmen McRae, I could listen to all day. Billie Holiday…., Ella I love, she scat sings well but I’d prefer to hear her sing. A lot of singers feel they’re not considered jazz if they can’t scat sing, and everybody can’t do that. The reason Ella and Sarah were so skillful at it was because they knew the language, they hung around Bird and Coleman Hawkins and those kinds of cats. A lot of singers today don’t know the language, I’d rather hear a singer just sing,” he says, warming considerably to the subject of jazz song.

“I think musicians should pay more attention to singers, they should really listen to the way they phrase, the way they breathe. I remember when I used to go to jam sessions singers would come hoping to sit in and sing with the band. The band members would play all night and then they’d let the singer play on one tune, and then all these damn horn players would take fifty choruses each. That’s some selfish, egotistical nonsense that needs to be stopped!”

When it is suggested that some instrumentalists frequently complain about singers not ‘having it together’ as far as the music is concerned, Malone agrees that does happen occasionally. “But there are a lot of musicians out there that should put their egos in check when dealing with singers. A lot of times I’ve seen where singers did have it together, but sometimes instrumentalists really give singers a bad rap and I’d like to see that attitude eliminated, because I love singers,” he says, citing Cassandra Wilson, Vanessa Rubin, Dianne Reeves and newcomer Claire Martin among those he appreciates.

In addition to lending fervent support to Krall or whomever he’s working with, Malone’s goals are clear: “I just want to learn more about my craft, write more, and just kind of keep unlocking the secrets of that six-stringed monster.”

Russell uses an archtop guitar especially made for him by John Buscarino. He’s still experimenting with different kinds of flat wound strings and amps.

Sam Cooke: Live at the Copa