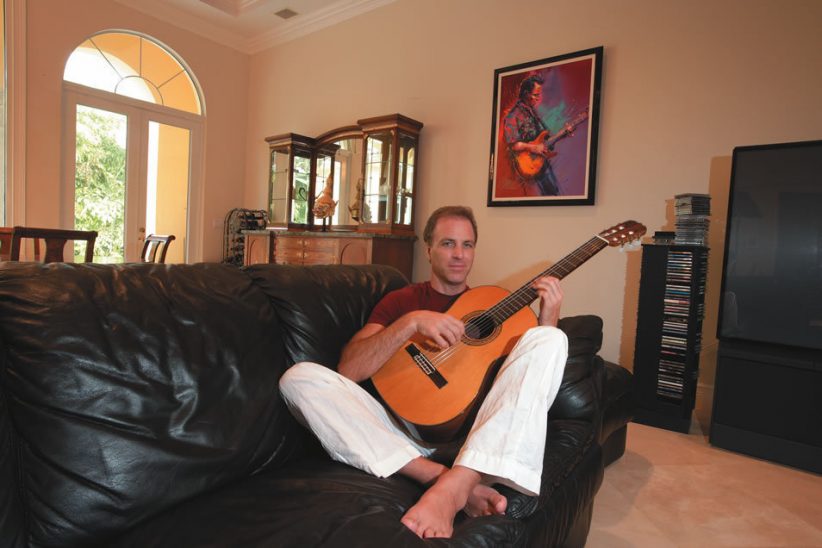 Russ Freeman loves fruit. His Boca Raton, Fla., estate is full of royal palm trees, coconut palms and banana trees (both the Hawaiian and Caribbean types), which Freeman and his Venezuelan girlfriend regularly go outside and pick. “We eat a lot of fruit,” laughs the 45-year-old guitarist.

It’s unlikely that when Freeman formed the Rippingtons in 1987 he could have imagined their success would allow him to live in Boca Raton’s estate section in the midst of his own miniature fruit farm. But with 13 hit albums to date (including the Rippingtons’ most recent, Wild Card), Freeman and his fellow Ripps can likely live and grow whatever they like.

To be fair, Freeman does consume more than just fruit, but “we eat light because you just don’t eat heavy on the beach,” he chuckles. “We eat very healthy. My girlfriend is Latina, so we eat a lot of salad and chicken.” His passion, though, is coffee. This affinity, however, isn’t your normal Starbucks customer’s grande-double-mocha-with-half-skim-half-one-percent-no-foam addiction. Freeman actually roasts his own coffee and has been doing so for the past couple years. He owns a coffee roaster and buys green beans online. “What’s really fun is just to order them all over the world and try different beans,” Freeman says. “Right now, I’m drinking Brazil Cerrado. It’s a little bit smoother and milder than the Guatemalan. The other cool thing about roasting your own beans is you can decide how dark you want them.”

But just because Freeman loves his coffee, don’t automatically put him in that “coffee and cigarettes” crowd. “I don’t drink alcohol and I don’t smoke.” Never? “Never.” Quite an accomplishment for a touring musician.

Only two blocks from the beach, Freeman’s two-story Italian-style villa personifies the calm and openness that Florida is known for and reflects Freeman’s simple and clean lifestyle. A circular covered porch-the arched walls held up by four white columns and sandwiched between the two wings-welcomes you into the house. “It’s a funny combination between a very modern Italian-style house and an open beach house. It’s a very cool, beautiful home,” he says.

The interior of the house is cool and refreshing; it is, after all, entirely marble. Carpet is all but banished, save for an antique rug or two. The reason for all the marble? “Number one, it’s really beautiful,” Freeman says. “Number two, it doesn’t retain any mold or dust or dander. You don’t want all these things collecting in carpet. The house is very, very clean.”

Outside the house, the land itself is peaceful and private. The backyard has a large pool and an outdoor shower, and an estate fence with a wrought-iron gate surrounds the house. Freeman’s neighborhood is only four blocks wide, with the Intracoastal side to the east and the Atlantic Ocean to the west. To call it picturesque would be an understatement.

Living there is almost like a vacation, which Freeman says he doesn’t take a whole lot of “because my work has me travel so much to great places. But I love Italy, and I’m looking forward to trying to get over there later this year. I haven’t traveled extensively in the south, but I love Portofino and the Riviera.”

With his love of Cuban food, a Venezuelan girlfriend and his sheer presence in Florida (only an hour away from Miami), it should come as no surprise that Wild Card, released on Freeman’s own Peak label, has a heavy Latin presence. Besides the evident Latin beats and rhythms, the album also features guest artists including Cuban vocalist Albita and Latin group Ozomatli. Freeman says Wild Card was partially inspired by his abode: “I think down here, living this lifestyle, has really become a great influence to me.”

“I have a Mac G4 primarily for business, and I also have Windows. My friend built me a custom computer and it’s pretty nice, so I use both platforms.”

“We love Alejandro Sanz and we love salsa.” While Freeman never claims to dance salsa, “My girlfriend sure does.”

“I usually use Genilux in my studio, and my whole house has a sound system wired throughout. I think they used Bose.”

Freeman describes his lifestyle as “very active,” and says he tries to run six miles a day on the beach. “I got into running about a year or two ago and I’m really enjoying that.” He also said he enjoys swimming. “I used to love softball, but I haven’t played in years.”

In addition to cooking, Freeman spends time working with his Web site company, RFMedia (rfmedialab.com). “I really enjoy my little Web site business. It’s a lot of fun, and I have some pretty great clients.”