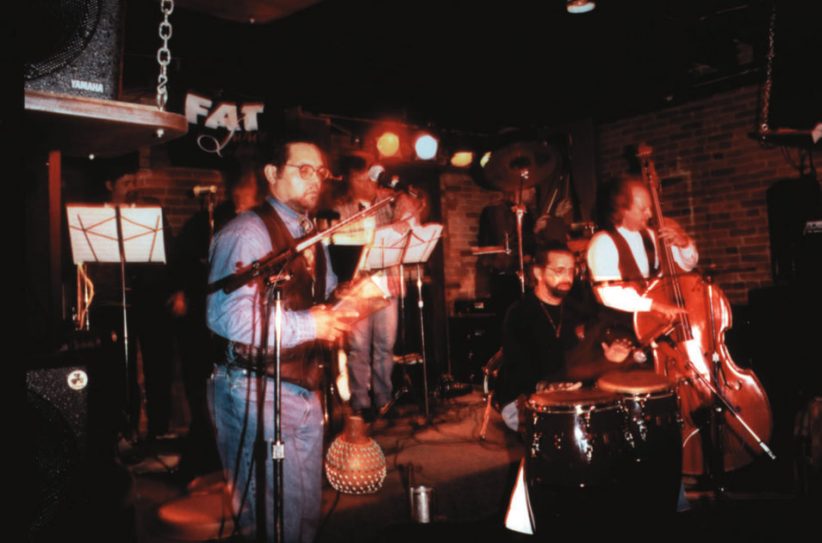 Early on in his jazz career, bassist Josh Schwartzman got turned onto the Latin sound while studying at the Creative Music School in New York. The result, in 1986, was his formation of the Rumba Club-an aggregation offering acoustic, improvisational music with a distinctively Latin rhythm. He calls it, in the purest sense, “Latin jazz,” with the emphasis on “jazz.”

Schwartzman’s starting point was his love for acoustic jazz in the Blue Note tradition. “What the band does successfully is retaining the jazz harmony, melody, and solo style, but applying different grooves to it,” he said. “It’s unlike some other types of Latin jazz, like Tito’s music for instance, which is different from jazz harmonies.”

Schwartzman plays an acoustic bass and Tim Murphy is on acoustic piano. Others in the group are Alex Norris on trumpet, Paul Hannah on alto, Craig Considine on trombone, Willie Vazquez on bongos and vocals, percussionists Orlando Cotto, Jim Hannah, and Rudy Morales, and Latin trendsetter Andy Gonzales, who plays bass on four of the cuts and produced the group’s new recording, Mamacita, their second on the Palmetto label.

“Improvisation is what makes our group special,” said Schwartzman. “We’ve been together for a long time and we’ve congealed with some solid Latin players. I look at Andy Gonzales’ Fort Apache Band as the trendsetting Latin jazz group, and that’s why we have him producing our records.” The band is at home with rumba in all of its forms, as well as meringue, mambo and cha cha cha, among others.

Schwartzman’s influences have been that same Fort Apache band, as well as the afore-mentioned Blue Note recordings, including Woody Shaw and Herbie Hancock. Blending Latin rhythms with bop lines, he said, was “doing just what comes naturally.”

The Baltimore-based band has been gigging mostly in the northeast but looks forward to branching out, hopefully to more overseas gigs and European festivals.