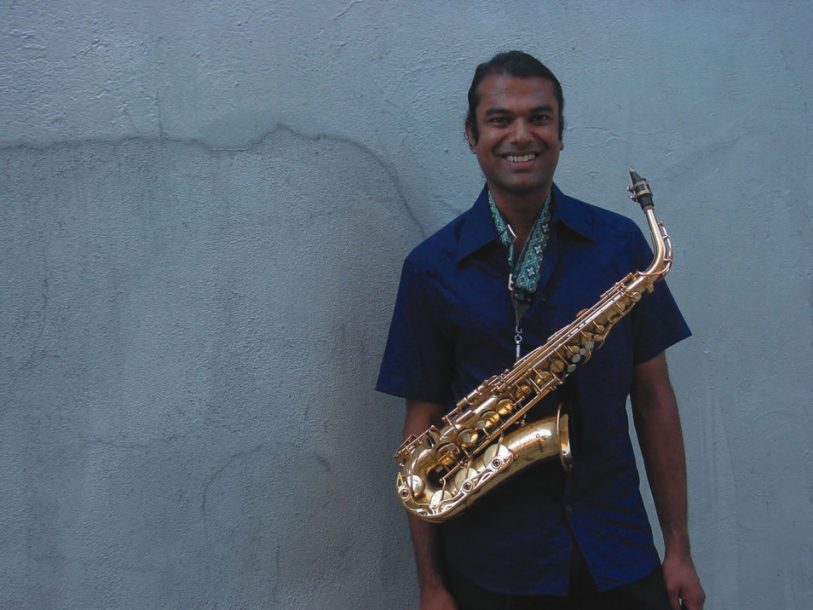 The title of Rudresh Mahanthappa’s new recording, Black Water (Red Giant), refers to the ocean, the prodigiously wide and deep body of water you cross when you leave your culture behind. The 10-song suite, tied together with interrelated rhythmic and melodic motifs, serves as a meditation on cultural displacement, but it’s also an opportunity for the saxophonist-composer to explore his Indian ancestry in music. Here is what you will not hear on Black Water: tablas, sitars, incantation or drone. This is not Indo-jazz fusion. Aside from very subtle touches-a saxophone played with a pinched sound and an occasionally sliding pitch or a rhythmic cell built from a 10 1/2-beat cycle-Mahanthappa’s music is cutting, sleek and heavily rhythmic modern jazz. It has more in common with the music of Steve Coleman or Greg Osby than it does with that of Ravi Shankar.

“I grew up listening to Indian religious music,” Mahanthappa says. “Later, I studied it, because I had a relationship to it. I gravitated to it, like Steve Coleman gravitated to certain African music. He felt a cultural draw to it. But I’m not trying to create a fusion. If I wanted to do that, I’d get a tabla player. I’m trying to express those sounds in the context of jazz today. I’m trying to make a hard statement-some sort of expression of Indian-American identity. I think that’s expressed throughout the record.”

Mahanthappa’s quintet includes pianist Vijay Iyer, who also grew up a first-generation Indian-American largely cut off from other Indians. Mahanthappa met Iyer several years ago through Coleman and found that they shared very similar backgrounds as well as the same musical interests: tight, biting and funky postbop derived from Parker and Coltrane and manifest in Osby’s and Coleman’s music. “It was miraculous that we met,” Mahanthappa says. “It’s almost like we’re cousins or brothers.”

Not surprisingly, their interaction forms the core of Black Water. Mahanthappa spends much of the recording playing easily and comfortably at driving tempos, subdividing the spaces between Iyer’s pounding chords with his long, twisting melodies. Even though Mahanthappa draws inspiration from his ancestry and the mysterious pain of the Indian diaspora, he presents it here honestly and in his own language-that of modern jazz. The tabla player is not missed.