Skip to content
Become a member and get exclusive access to articles, live sessions and more!
Start Your Free Trial
Home > JT Archives > Roy Hargrove and Enrico Rava at the 2001 Montreal Jazz Festival 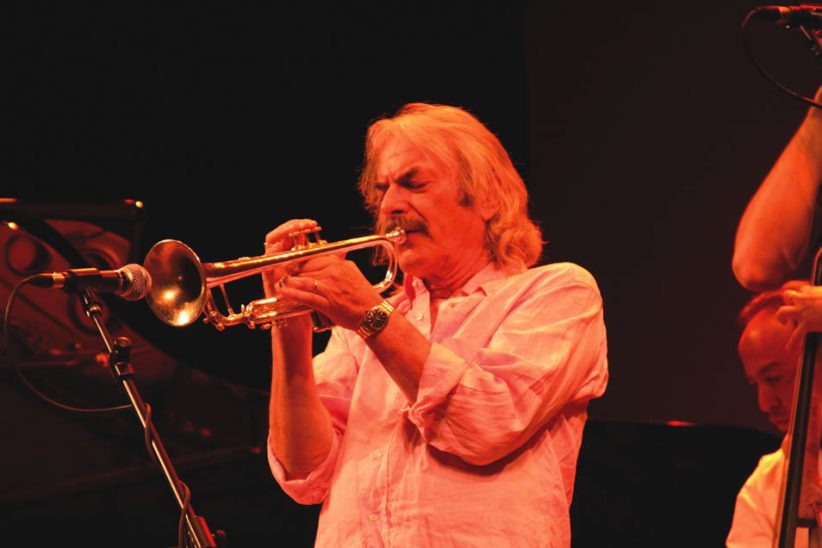 Among the myriad charms of the massive Montreal Jazz Festival are its Invitation series. These four-night stands by multifaceted musicians offer a unique glimpse into the versatility and vision of the invited artists. For the 22nd edition of the festival, Invitation series players included Michael Brecker, Roy Hargrove and trumpeter Enrico Rava, whose four nights capped off the Jazz Europa series spotlight on Italy.

The prospect of comparing and contrasting four evenings of artistry from Hargrove, a quintessential representative of a generation of American jazzers who’ve been accused of conservatism at the expense of advancing the art form, with Rava, a potent representative for European jazz, many of whose musicians and supporters have been pointing sharpened criticism at what they view as the current creative malaise in American jazz.

In the end, Rava’s approach was decidedly closer to Hargrove’s than to the suggestion-or some writer’s fantasy-of a European leading edge of jazz. Rava joined the pro-Euro chorus, suggesting to journalists that jazz’s energy source had shifted to Europe. Guess he didn’t have himself in mind in that cutting-edge equation, as the interview took place the day of his Miles Davis program, and the day prior to his pugnacious set in the company of the adventurous Americans Ray Anderson, Mark Helias and Pheeroan akLaff.

That the Rava and Hargrove series were scheduled back-to-back on the same four evenings made them all the more compelling. At the intimate chapel Salle du Gesu, Rava opened in duet with the over-animated pianist Stefano Bollani, whose capacity is enormous, finesse limited. There is a point, even when soloing in a duo setting, at which the partners must maintain a duality of purpose. Bollani missed that point entirely. Still, Rava is a man of abundant humor, something he displayed in both his playing and witty, fractured French asides.

Dashing over to the opera house Monument National for Hargrove’s opening night with his quintet, navigating the terrain is a feat unto itself, what with huge throngs delighting in the seven street stages of free music. Longevity is the key to Hargrove’s team, and the growth of drummer Willie Jones III continues apace. Hargrove’s beautifully balanced program, with altoist Jesse Davis more than filling the departed Sherman Irby’s shoes, was largely an exploration of the trumpeter’s originals, themselves clearly in progress. Given that he has developed a potent band sound, Hargrove seems now to concentrate on his writing, and has become a particularly romantic balladeer on his butter-cream flugelhorn. We also seem to be witnessing Hargrove’s melodic phase.

The next evening found Rava in twin-trumpet and flugelhorn quintet, paying homage to Miles Davis, circa 1962 to 1965, with Paolo Fresu playing Miles in both timbre and stance. Fresu’s lovely legato phrasing balanced neatly with Rava’s tart maneuverings, and was especially rewarding on “When Lights are Low.” Bollani’s contribution this night was decidedly more effective than in the duo, reigned in by a disciplined, swinging rhythm section.

Hargrove’s second night, without the quintet, was a bit more improvisational, more playful in the company of peers bassist Christian McBride and guitarist Russell Malone. The blues were deep in this house and the McBride/Malone tandem wove a deep pocket that Hargrove luxuriated in all evening.

On the third night Rava’s playing roamed freely in the company of bassist Helias, drummer akLaff and trombonist Anderson. The extremely musical akLaff upped the ante particularly for Rava, a noticeable power boost for the flexible Italian. The ebullient Anderson complemented Rava’s temperament nicely, particularly when they reprised Don Cherry’s “Art Deco,” with its puckish storyline. Clearly it’s time to end this burgeoning Euro/American jazz turf war and seek the kind of detente Rava achieved with Anderson, Helias and akLaff.

Some of Hargrove’s more rewarding moments were delivered the third night in the company of the Monty Alexander Trio. It was ‘let’s go to the islands’ from the jump. Hargrove respectfully deferred to Alexander’s enormous piano chops, resulting in a simpatico that should compel a recording session. A low blues found Hargrove, usually more Lee Morgan than Davis, deep in the muted house of Miles. The concert did drag a bit when Hargrove introduced a young vocal ingénue for a couple of tunes.

Rava closed his series in the familiar company of his Electric Five Project, provocatively opposite a Miles Davis tribute gig by Wallace Roney in another hall. What makes this Rava’s electric project is the delicious contrast of two lucid guitar voices: Domenic Caliri and Roberto Cecchetto. They lent Rava a wall-of-sound that enveloped his trumpet artistry. Caliri is an exceptional soloist, Cecchetto is a thorny ensemble colorist and the music ranged from Nino Rota to Rava originals. But the siren call of Roney’s Davis tribute produced happy feet and midway through the Electric Five Project I did the Montreal shuffle over to Theatre Maisonneuve to catch Roney-does-Miles.

Two blocks away Hargrove closed out his four-night stand bathed in strings, à la his most recent Verve recording, Moment to Moment. Montreal’s IMusici chamber orchestra strings were true to the album arrangements, always shading, never intruding on Hargrove’s gorgeous trumpet and flugelhorn. It was all a tad sweet until the strings rested preceding the finale, when Hargrove and his quintet unleashed its blistering sound.