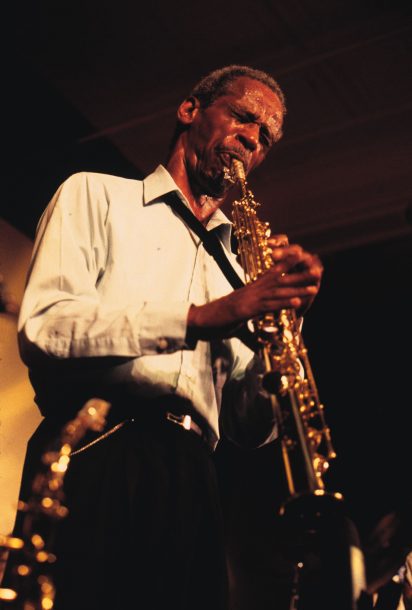 Artists don’t assess their accomplishments by industry standards-a history-shaping discography, prestigious commissions, a blue-chip list of festival and concert performances, or reams of glowing critical acclaim. At most, that’s fodder for a press package. Their own criteria run far afield of such indicators. That’s not to say they use gratuitously oblique gauges. It is often the case that the truly singular artist has surprisingly simple, even charming, benchmarks by which to appraise achievements.

Roscoe Mitchell measures his extraordinary contribution to American music in such a way. The composer-wind player has concurrently reached a significant milestone in each of the main facets of his work. The Art Ensemble of Chicago is passing the third-century mark, reasserting its eminence in creative music with its Big Chill-like, first post-Joseph Jarman album, Coming Home Jamaica (Atlantic), and celebrating past glories with the reissue of two classic recordings from the ’70s (Bap-Tizum and Fanfare for the Warriors, licensed from Atlantic by Koch Jazz) and the publication of Art Ensemble Of Chicago: Great Black Music-Ancient to the Future, an absorbing coffee-table book of archival photographs, poetry, interviews, testimonials, and essays (it can be ordered via e-mail at: [email protected]).

Additionally, Mitchell has the rare privilege of being a living composer whose music will be performed at this year’s Prague Spring, the month-long music, theater, and dance festival; an orchestral version of his “Fallen Heroes” will feature Mitchell’s alto saxophone and singer Thomas Buckner. The evocative composition is also performed by the nine-piece Note Factory on Nine to Get Ready (ECM), arguably the most comprehensive single-disc presentation of Mitchell’s wide-ranging compositional gifts to date. And, Mitchell reunited with his boyhood idol, Chicago piano legend Jodi Christian, for their second in-and-around-the-pocket quartet session, In Walked Buckner (Delmark).

Yet, nothing of the sort is mentioned when Mitchell talks about his nearly 40 years of envelope-pushing innovation. Instead, he uses an almost Jungian image to frame the discussion. “I’ve always looked at older people who are totally happy and have their thing going on, and thought that was how I wanted to be,” Mitchell recently explained. “And that’s what I’m developing into. I’ve been really fortunate to live through what I had to do to get to this point, and I realize that was the only possible way to have gotten to this point. And I’m really fortunate to still be able to do things with the people that created this whole legacy of music.”

Mitchell obviously savors the opportunity to revive such older large-scale works as “L-R-G” (a trio for woodwinds and brass) and “The Maze” (for eight percussionists) (a late ’98 Chicago concert celebrating the 20th anniversary of these pieces was recorded by longtime Mitchell producer/advocate, Chuck Nessa), and to reunite with other first-wave AACM musicians like pianist Muhal Richard Abrams (Mitchell will perform with Abrams’ vanguard Experimental Band in New York this October). Yet, significantly, Mitchell channels his connections to “the people who have been important” into engaging compositions, several of which appear on Nine to Get Ready: “Leola,” the luminous, lyrical opener, was inspired by his recently passed stepmother; the jaunty, riff-spined “Bessie Harris” is a tribute to his aunt, the last living member of his mother’s family; and “For Lester B” is a pungent ballad for his longtime AEC front-line partner.

“It was really important for me to record these compositions for these people with these musicians,” Mitchell said, detailing the merging of heartfelt homage and long-deferred dreams. “This ensemble is really about 25 years in the making. Ever since seeing Coltrane play with two drummers, I have been interested in multiple rhythm sections, and wanted to use multiple rhythm sections in an ensemble with an orchestral range. I have worked with all of these musicians for years, but I never had the opportunity to bring them all together before.” Mitchell explained that trumpeter Hugh Ragin, trombonist George Lewis, pianists Matthew Shipp and Craig Taborn, bassists William Parker and Jaribu Shahid, and drummers Tani Tabbal and Gerald Cleaver “understand how to deal with different compositional structures and concepts, and how to listen in real time to complement each other, and give the materials a real clarity.”

This clarity is essential if Mitchell is to realize a larger goal, to compose works that have “a legacy like ‘Nonaah,’ which was repeatedly recorded throughout the ’70s as a solo piece, a saxophone quartet, and an ensemble work (a version is included on Fanfare for the Warriors). “Before I sit down to write, I think about possible situations in which I can use the materials,” Mitchell elaborated, using the evocative “Fallen Heroes” as a case in point; a solo version is included on the ’97 2-disc solo collection, Sound Songs (Delmark); on Nine to Get Ready, the arrangement balances pointed ensemble passages and improvisational flexibility; and a through-notated orchestral score will be performed at Prague Spring. “That helps me develop the materials in such a way that I can keep going back and create new compositions. That’s the technique I began with ‘Nonaah,’ to create portable materials.”

For years, Mitchell carried his materials between the realms of avant-garde jazz and contemporary classical music; recently, Mitchell added a third realm-early music. “I started playing the bass recorder and the baroque flute, and started associating with a lot of people who play early instruments,” Mitchell, a card-carrying member of the American Recorder Society, elucidated. “So I began to transcribe a lot of my songs for voice and piano, giving the bass recorder the vocal part, and creating parts for guitar-I use the guitar like a harp-bass, flutes, viol de gamba, and even harpsichord. I’m also starting to write something for a large recorder ensemble. Early music is a whole new space for me to transmit my work into, and for me to learn new ways to compose and improvise.”

This is borne out by Mitchell’s integration of bass recorder and baroque flute on several adventurous performances on In Walked Buckner. Both instruments are warm and exotic in delicate, sparsely notated passages, and they hold their own against the abrupt groundswells produced by Christian, bassist Reggie Workman, and percussionist Al “Tootie” Heath. They not only extend Mitchell’s already staggering palette; they encapsulate Mitchell’s current evolutionary phase, particularly the baroque flute. “The baroque flute is not as loud as a modern flute, but there is something about the sound of the wood that makes you fix your attention on it,” Mitchell said. “What I’m really fascinated by is that this is the sound that J.S. Bach and C.P.E. Bach composed for. That’s why none of their music goes below a low D. And it was a music you were expected to improvise in. You were expected to augment the parts. There’s a lot of knowledge in the relationship between the instrument and the music of that time that applies to what is happening now.”

However unlikely it may seem, Mitchell’s immersion in early music is wholly consistent with his groundbreaking aesthetic of sound as the cornerstone of creative music. It is also an extension of the time-honored jazz tradition of musicians looking beyond the established parameters of the music to find inspiration. “Musicians have always looked for new ways to express themselves,” Mitchell observed. “When you have a group of musicians looking together, that’s a community. That’s what we had in Chicago. I miss those days. You don’t realize what’s going on when it’s going on. It’s only now that I realize how much unfinished business there is from those days. The Art Ensemble still has unfinished business. I want to take care of as much of it as I can.”

Mitchell endorses Selmer saxophones; as a result, he plays the latest models of sopranino, soprano, alto, and tenor. His Selmer bass saxophone dates from the late ’70s. He uses Selmer mouthpieces on the sopranino and soprano, a Yanagisawa on alto, and a Vandoren on tenor and bass. His modern flute is manufactured by Miwazawa; his baroque flute is handmade by Thomas Boehm; his piccolo is a Gemeinhardt; his bass recorder is made by Moeck. Mitchell plays Buffet sopranino, Bb, and bass clarinets with stock mouthpieces. He uses 2 1/2 Vandoren reeds on his saxes and clarinets.

Currently, Mitchell is closely listening to the music of C.P.E. Bach, and recommends The Complete Flute Sonatas, performed by flutist Barthold Kuijken and harpsichordist Bob Van Asperen, on Sony Classics. He also is listening to “a lot of Jackie Mac,” including his work with Art Blakey and Lee Morgan.