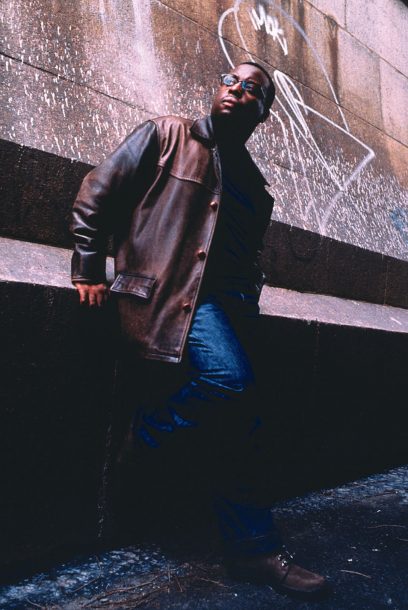 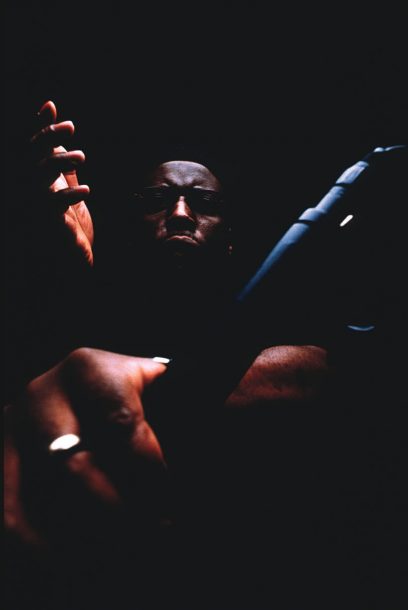 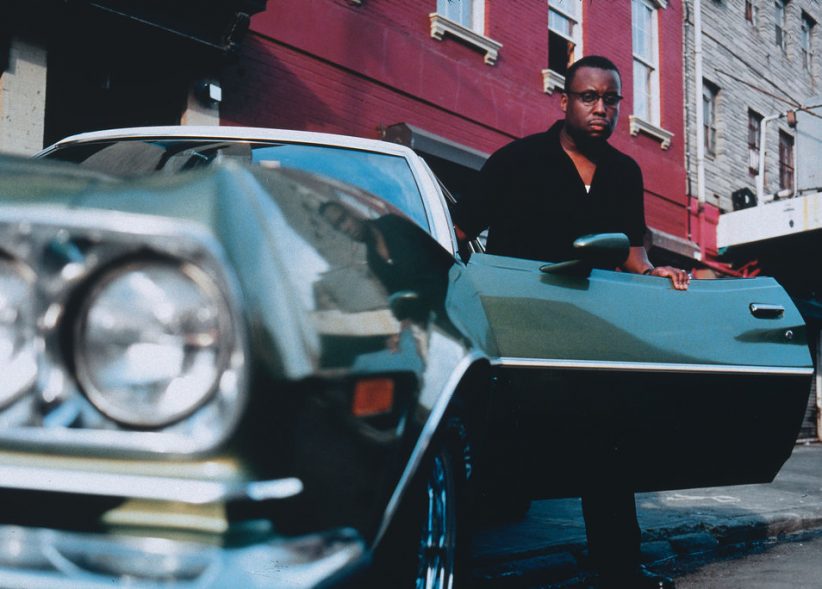 Here, soulful guitar meets crunchy rhythms to create a spicy mix that, while still easily accessible, is devoid of even a trace of the saccharine that can be found in some smooth jazz. Throughout Jordan’s decade-long recording career, he has explored ways of fusing his bluesy jazz sound-think George Benson, Wes Montgomery, Grant Green and Kenny Burrell-with hip-hop, club, funk and R&B elements, and he made a name for himself as one of the most significant figures in the acid-jazz movement.

It’s a warm spring day, and we’re sitting in a small conference room in Jordan’s publicists’ busy midtown Manhattan offices. Although previous album covers have sometimes depicted a dramatically-lit and intense-looking Jordan-and the photos inside Off The Record’s CD jacket find him sitting moodily on a building stoop or driving through the city with a grim expression-the casually-dressed artist sitting across the table from me couldn’t be further from the individual portrayed in those pictures. A warm, genial man who starts off the interview by offering to sign the CDs I’ve placed on the table, Jordan’s also an animated and candid conversationalist.

Off the Record is the follow-up to Jordan’s 2000 release, A Brighter Day, an eclectic collection that earned him airplay on smooth-jazz radio as well as a Grammy nomination and a Gibson Guitar Award. American smooth-jazz fans may have liked the album, but it wasn’t exactly hailed overseas. Jordan, who now lives in New York, recalls that A Brighter Day “wasn’t received as popularly over there, because to a lot of Europeans-especially the Brits, the market where I come from-it was too smooth. So I figured, ‘Well, on the next album, I’m going to make it harder,’ as in the antithesis of smooth.”

Deep beats and grooves abound on Off the Record. Things get raucous on the funk-rock closer, “Toe Jam,” while the opener, “Intro-Get Ready,” finds Jordan’s sinuous guitar weaving in and among producer Lee Stone’s pulsing rhythms and vocals by rapper Love Child and singers the Catfish Choir. Jordan injects some humor into the album with “Ronny, You ‘Talk’ Too Much,” a vignette in which Love Child is trying to spend a romantic evening with his girlfriend but is continually interrupted by Jordan’s guitar, which carries on a musical conversation. The title of the swinging instrumental “Floor and More” plays on the title of Miles Davis’ classic album Four and More, although the track itself is more about the dance floor than about the jazz icon. “It’s really about music for the head and the feet,” says Jordan. “A lot of dance music is just noise. It’s just a groove but there’s nothing else. There’s no depth. With ‘Floor and More,’ you can groove to it, but whilst you’re grooving to it, there is something going on musically.”

The companion pieces “On the Record” and “Off the Record” explore flip sides of the same composition. On “On the Record,” Jordan’s jazzy stylings meet an infectious dance groove that’s accented by funky vibes, while on “Off the Record,” the guitar is bathed in layers of atmospheric synths and ringing Fender Rhodes. As Jordan explains, the two tracks are intended to show two sides of his musical personality: “Ronny Jordan is known as this acid-jazz guy,” he observes, “and of the two, ‘On the Record’ kind of leans more toward that acid jazz-club thing. OK, ‘On the Record’-this [style] is what I’m known for. I’m showing you one side where this is what is expected of me: four-on-the-floor, acid-jazz guitar with a wah-wah-that’s Ronny Jordan’s stamp. Bam! Then there is another side of Ronny Jordan that not many people know. And I am into this atmospheric jazz thing, but not many people know that, so that’s ‘Off the Record.'”

Jordan’s fascination with creating moody atmospheres continues on the next track, “(The Theme From) Underworld.” With its somber guitar work and wash of synth effects, the composition has a dark, late-night edginess that wouldn’t sound out of place in a film noir-in fact, the tune will be featured in an independent movie called Glimpse. This isn’t Jordan’s only foray into cinema: after he recorded Off the Record, he played on a piece called “Blues for Danny” on the soundtrack by saxophonist Bob Belden for the independent film Three Days of Rain. “I played on this one piece and it was kind of like blues,” remembers Jordan. “Almost like ‘D Natural Blues’ from Wes Montgomery, because that’s what it reminded me of. It was very interesting, actually. The screen would be up and we’re watching Danny, the character, and we’re playing at the same time. So that was a real new experience.”

Jordan showcases his sister, Fay Simpson, on the inspirational vocal track, “Keep Your Head Up.” The sweet-voiced Simpson, who performs on England’s gospel circuit, has sung with Jordan before, but as he says she has devoted her life to a very different calling. A missionary who is deeply devoted to spreading God’s message, Simpson has traveled to numerous countries, including Australia, Japan and Jamaica with musicians and other missionaries. Says Jordan, “They’ll play, like, acoustic guitars, and she’ll do visitation and she’ll sing. She’s really dedicated herself to that. And it surprised the heck out of me, because she could have had [recording] contracts. And some labels-they still want her, but the impression I get with my sister is, she’s in love with the music, but she’s not in love with the industry.”

Inspirational music is nothing new to Jordan and his family. Ronald Simpson-he took the surname Jordan from basketball superstar Michael Jordan-was born in London on November 29, 1962, to parents who were ministers as well as singers. Jordan and his six siblings, all of whom are musicians, grew up steeped in gospel music, and Jordan’s uncles later introduced the young guitarist to jazz.

Jordan came to widespread attention in the early ’90s with his inventive reworking of Miles Davis’ “So What,” which appears on his acclaimed 1992 debut, The Antidote. “It was such a rare record for its time, and it got played everywhere,” says Jordan of that groundbreaking tune. “It was getting played on Radio One, and that was a miracle, because Radio One don’t play jazz. Period. And they were playing it. And a lot of DJs too, they were playing it as background music-or some weather channel, they’ll be talking about the London [weather] or traffic or whatever, and it’s in the background.”

Smooth-jazz radio hasn’t exactly embraced Off the Record, which was originally released in Oct. 2001, but Jordan is philosophical. “I knew that we weren’t going to get the radio support like we got on A Brighter Day, because the beats were a little tooooo funky, sophisticated. So I guess the radio people just decided, ‘Well, no, we won’t go with it.’ And it’s really ironic because it’s good stuff! But it wasn’t because it’s not good. It just didn’t fit in.”

But he becomes particularly enthusiastic when describing the second project, a collaboration with various club DJs. “It’s called RJ/DJ,” he says. “RJ is Ronny Jordan and DJ is DJ-and that is really going to go into that whole hip-hop-jazz genre like never before. So I have a project now where I don’t have to worry about radio, because I know I’ve got that covered with the other album. And with the RJ/DJ project, it’s going to be strictly for clubs, underground. And the beats are going to be heavier; it’s going to be more underground and stuff, but it’s going to be more interesting, too, because there’s going to be jazz loops going through and jazz ideas. And the guitar-if you strip all that down and just listen to the guitar, it’s a throwback to Wes, Charlie Christian and that vein.

“I’m really excited because the jazz-hip-hop genre is something that I really want to delve into, but I couldn’t do it if I’m having to produce radio tracks all the time. Because of [the previous] project, it enables me to go into one genre as far as I want to [go]. I mean, there’s even going to be some elements of rock as well, and real funk. And also, I notice there’s a lot of sounds that are pretty hip now, where you’ve got the beats where you don’t have bass lines. You just have the rhythm guitar going along and you’re just playing along with it and there’s no bass lines, and that’s pretty hip.”

Sounds sweet, but not too sugary.