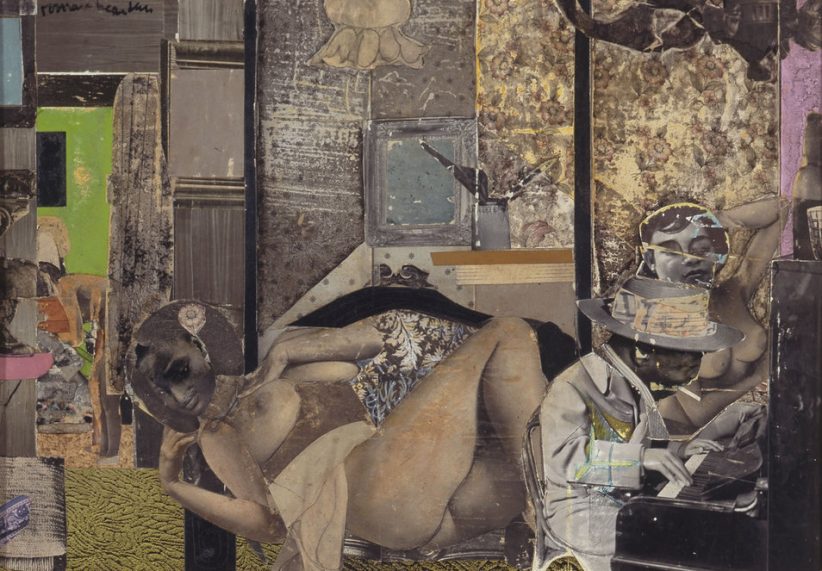 The Apprenticeship of Jelly Roll Morton, 1971 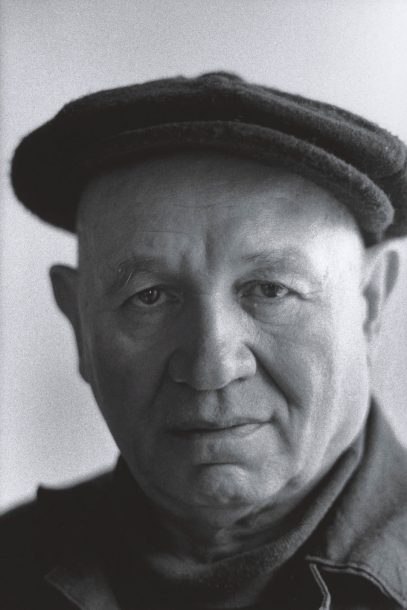 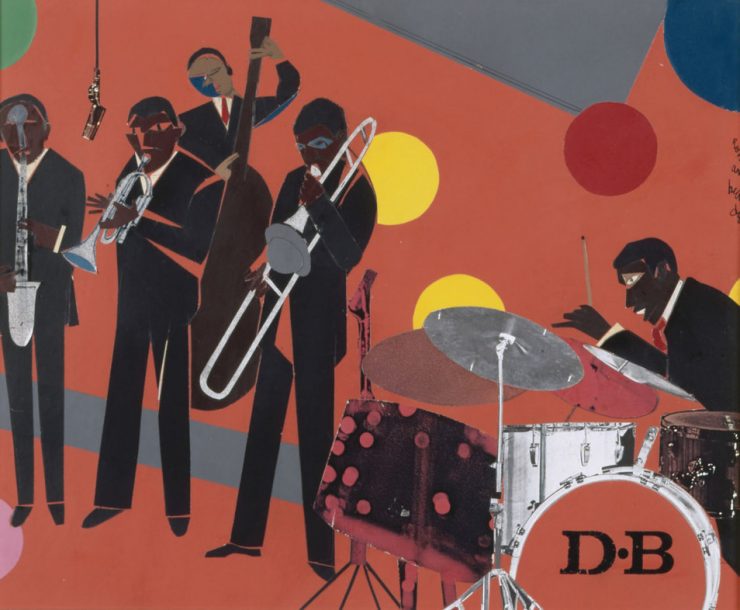 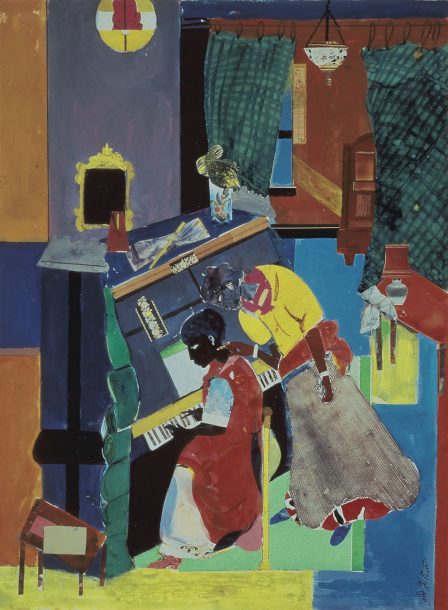 Riffs, vamps, thematic variations and call and response are endemic to blues and jazz. Those devices also served as signature elements in the work of legendary visual artist Romare Bearden. Through his inventive use of color shading, texture, rhythm and figurative depictions of musicians, Bearden’s evocative works, especially his legendary collages, almost became synonymous with jazz. He would often revisit pieces, much like Duke Ellington or Thelonious Monk would go back and retool certain compositions. Throughout his career, Bearden composed series of variations such as “Of the Blues,” “Odysseus” and “Conjur.” All of these series and so much more come into play at Washington, D.C.’s National Gallery of Art’s exhibit The Art of Romare Bearden.

“Bearden always talked about jazz in regards of making a move and then responding to that particular move and then recalling it later in a painting or later in his career,” says Ruth Fine, curator of the exhibition. The Art of Romare

Bearden comprises approximately 130 works of paintings, collages, drawings and watercolors, resulting in the most comprehensive exhibition of his work yet. “I wanted to give a good overview,” says Fine, “so I picked examples of all of the subjects that he explored-the most famous of which are North Carolina, New York, Pittsburgh and the Caribbean. I tried to pick works from all points of his career and represent all of his mediums and the patterns that happened in his work.”

The exhibition covers 40 years of Bearden’s work: from 1941, one year after his first solo exhibition in Harlem, to 1986, two years prior to his death. Divided into nine thematic sections, including one titled “The City and Its Music,” and sequenced in roughly chronological order, The Art of Romare Bearden will include musicinspired pieces such as 1964’s “Train Whistle Blues: I and II,” 1971’s “The Apprenticeship of Jelly Roll Morton” and 1975’s “Blues Singer.” Also on display will be Bearden’s famous artwork for Donald Byrd’s 1978 album, Thank You…For F.U.M.L. (Funking Up My Life) and Wynton Marsalis’ J Mood, from 1985. In fact, along with George Wein, Garth Fagan and others, Byrd and Marsalis are among the exhibit’s lenders.

Even though Bearden began illustrating music themes as early as 1942 with “Folk Musicians,” and it’s been often said that Ellington and Fats Waller were friends of the Bearden family, his jazz-inspired collages didn’t originate until 1964, when he was a part of African-American artist collective called Spiral, which came together to discuss what its members, as artists, could contribute to the Civil Rights Movement. Bearden suggested that they make communal works of art in the form of collages. “It seems to me that that idea sort of came out of the jazz jam session, where people get together and make something and it’s unpredictable,” Fine says. The idea was rejected by Spiral, but Bearden went on to create vivid collages on his own, cutting pictures out of newspapers and magazines and later incorporating colored paper, foil, sanded surfaces and other raw materials. “Toward the end of his life,” Fine says, “he did a lot of paintings with collage details as opposed to collages with painterly details.”

Coinciding with The Art of Romare Bearden is a complementary CD, Romare Bearden Revealed, released on Marsalis Music, which features Wynton and Branford Marsalis, Doug Wamble and others, performing music related to Bearden’s life. For the exhibition, the Romare Bearden Foundation originally asked the label to put together a compilation of music that inspired the artist, but Branford and label consultant Bob Blumenthal thought that it would be more interesting if they reinterpreted the music. “The world does not need another compilation CD,” Branford says. “They’re not even a novelty anymore; they’re like telemarketers.” Among the compositions are Jelly Roll Morton’s “Jungle Blues” and James P. Johnson’s “Carolina Shout.” “We’re playing 70- and 80-year-old songs-stuff that I’ve spent years learning how to play so I wouldn’t have to play it anymore, rather than the new-fangled philosophy of avoiding it completely. It was fun for all of us, simply because it was music that we would never play.

“Bearden’s work probably influenced me subconsciously, because his philosophy and line of reasoning directly coincide with mine,” Branford continues. “My father brought in all these Picasso pieces when I was 10, but I had no real consciousness [of them] at all. They kind of awakened things in me that I didn’t even know were there. By the time I was able to appreciate Romare’s work, it was more like a kindred spirit relationship. His work had that kind of depth that I was striving for.”

The Art of Romare Bearden will be a part of Washington, D.C.’s Blues and Dreams celebration of the African-American experience in the nation’s capital. In addition to the exhibition and Marsalis CD, the National Gallery will host lectures, panel discussions, concerts and films (visit nga.gov for more info). The exhibition will reside in Washington, D.C., until January 4, 2004, and then it will travel, with slight variations, to San Francisco, Dallas, New York City and Atlanta.