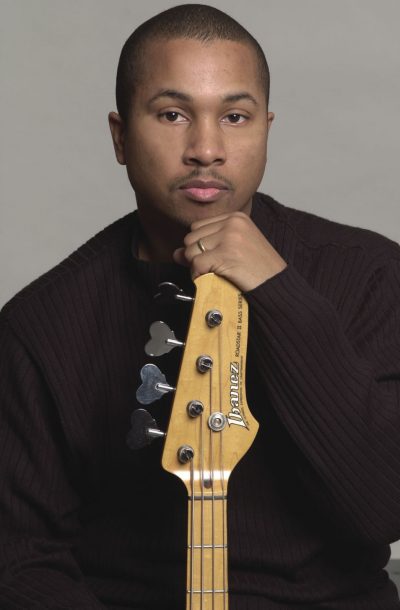 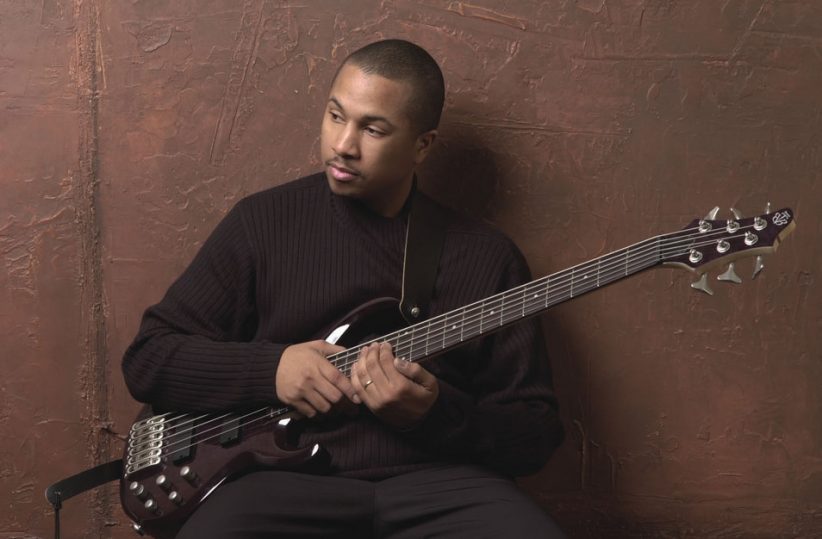 “I like music,” says Guerin. “I came up playing and listening to all kinds of music in Louisiana. There was jazz and classical, folk, blues, R&B, zydeco. My mother played bass in jazz, blues and zydeco bands. We used to have jam sessions at home, and I’ve played some of everything. For me the true test of anything is how skillful the musicians are when they’re playing it.”

When asked if he finds any difficulty in shuttling between instruments or whether he’s been more influenced by acoustic or electric players, Guerin says: “My first instrument was actually viola in the fifth grade, before I switched first to guitar and later to bass. Yes, there’s a huge difference between acoustic and electric in terms of size, body and design. It takes a different set of muscles and different techniques on each one. But I’ve studied the traditions on both instruments and learned how to attack each one in terms of the hand positions, the sound and the swing. It’s really fun to have a voice on both instruments. I remember seeing Milt Hinton and watching his slap technique; he was doing things with his hands and his positions that were very different from what I was doing at that time.

“But I’d say if there’s a key, I’ve always been influenced more by bassists who tried to solo like horn players. Or an Oscar Pettiford-when he soloed on either bass or cello-it would be like Louis Armstrong singing or Ella Fitzgerald scatting. If you talk about acoustic players that have influenced me, the list is very long. People like Pettiford, Jimmy Blanton, Ray Brown, Jimmy Garrison, Charles Mingus, Sam Jones, Herbie Lewis, John Clayton and Charlie Haden as well as contemporaries like Bob Hurst, Rodney Whitaker, Reginald Veal and Christian McBride. As far as electric players, Larry Graham, James Jamerson, Marcus Miller, Louis Johnson and especially John Patitucci, who also plays both acoustic and electric and plays them superbly. As far as what he did to make people take the electric bass seriously, certainly Jaco Pastorius, but I never tried to play electric in that style.”

Guerin has demonstrated his versatility and proficiency by appearing on more than 50 albums since making his professional debut in the late ’80s as part of the Mark Whitfield Trio. He played with Whitfield for nearly nine years, but lately is more known for his membership in the Marcus Roberts Trio and his appearance on The Marsalis Family: A Jazz Celebration CD, DVD and PBS television presentation.

Besides appearing on all those records, including three others as a leader, Guerin has participated in several academic ventures over the years. He’s a graduate of Southern University, where he was mentored and later played in a band led by legendary New Orleans teacher and clarinetist Alvin Batiste. Marcus Roberts’ trio served as artists-in-residence for the 2002 Winter Olympics in Salt Lake City, and in late January the group completed another residency at the University of Santa Barbara in California. Guerin has also been involved in a number of clinics and appearances at school systems across the country, including one squarely in the heartland: in Iowa City and Cedar Rapids, Iowa. Based on these experiences, Guerin rejects the notion that jazz doesn’t resonate with 21st-century youth.

“We’ve found just the opposite in our appearances,” Guerin says. “In fact, we’re part of something different, in that the parents and children in the places we’ve been really want music in the schools and appreciate it. We’ve played at elementary schools and middle schools, with high school jazz ensembles and college students, and all those levels, whether you’re talking about music students or just people and children who appreciate music, they understood and enjoyed all types of jazz. The young children got into the grooves and understood all the scenarios we presented them. With the high school and college students, we discussed different approaches to soloing, showed them about ensemble playing and working effectively with a rhythm section.

“The one thing that carried over in every situation was that people respond to musicianship, to people having fun and to the groove. Jazz is a skillful music. People want to groove and they enjoy music that feels good, any kind of music, and they appreciate musicians that make them feel good and enjoy what they’re playing.”