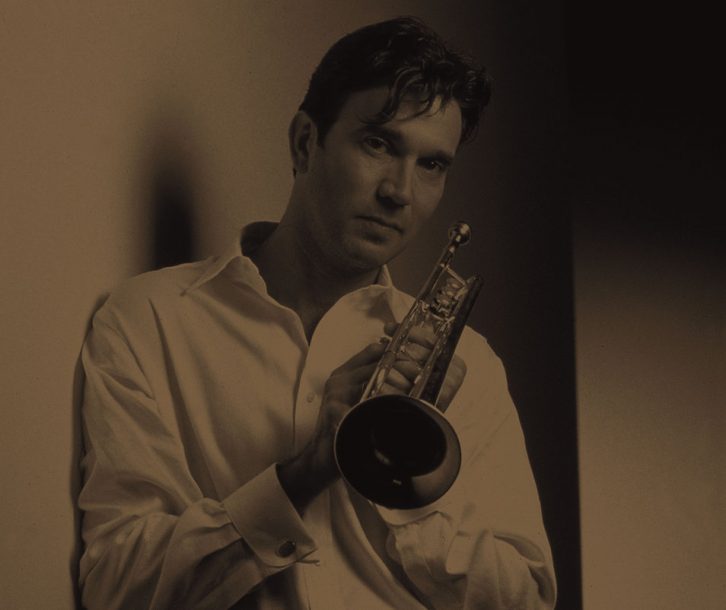 Trumpeter/flugelhornist, session player, producer, occasional vocalist, Rick Braun wears a lot of hats. He even sports a pork pie chapeau on the cover of his latest CD, Full Stride. His youthful energy and appearance, however, belie the many musical paths he’s traveled over the years.

After attending the Eastman School of Music in Rochester, Braun got his first break when Auracle, his promising fusion band, won a competition and was given the opportunity to work with the renowned Miles Davis producer, Teo Macero. Watching Macero work proved to be an ear-opening experience for Braun and it wasn’t long before he and Macero were collaborating as producers on the band’s second album.

By the early ”80s, his career path had taken some curious twists. He put out a record in Japan which featured him as a pop vocalist, and afterward joined the songwriting rank sat Lorimar, which became Warner Chappell. Collaborating with members of REO Speedwagon, he co-wrote the Top 20 hit “Here With Me” before returning to brass work, touring and recording with such pop artists as War, Sade, Glenn Frey, Tina Turner, Natalie Cole, Tom Petty, Crowded House and Rod Stewart. Further expanding his interests, Braun also began composing film soundtracks and played lead trumpet on the television show, Night Caller.

Since then he’s emerged as an artist in his own right, a solo performer and record producer busy with a steady flow of projects. Yet the additional tasks and responsibilities hasn’t caused Braun to lose sight of what’s really important to him-his music.

“That’s my favorite thing,” he says, “I would never give up creating and playing my music in concert. I can’t just sit in a studio and make records all the time. I like to see how people respond to my music and get that feedback”

His current recording is his sixth solo effort and second on the Atlantic label. “I was feeling pretty good, pretty good about life,” notes Braun. “I think that the feelings I convey in the music that I created is probably no different than anybody else’s who’s a writer. It’s only a reflection of what I’m going through at the time. During Body and Soul (his previous CD), I was going through some personal changes. It was a difficult time in my life. So there was a lot of thoughtfulness going on.

“But on this one things are pretty solid and I’m feeling good. It’s like a celebration in the music. I’ve got a wonderful lady in my life now, I’ve been playing my music to crowds of people who really like what I’m doing, and my record company just kind of let me run with it and do what I felt. Just a good situation in general.”

As with most of the projects that Braun is involved with, he worked out of his home studio in Woodland Hills, CA . It’s crowded, yet he loves working there, because he’s not pressed for time, there’s no treacherous traffic, and the gloss of Hollywood is off in the far distance. Fortunately for Braun, his new wife, Christiane, (pictured on the CD cover in full stride) enjoys the crazed flurry of activity too.

The tracks are urban-oriented, ranging from hard funk on “Hollywood & Vine” to sleek relaxing grooves of “South Of Midnight.” Utilized were the talents of old friends and smooth jazz groovers: guitarist Jeff Golub, keyboardist Brian Culberton, guitarist Peter White, and saxophonist Boney James, who also plays keyboards. David Palmer, Rod Stewart’s drummer did a lot work on the CD too, co-producing many of the tracks.

“I have a guest vocalist on this CD too,” Braun reports, “Maysa Leak from Baltimore. She’s lead vocalist for the group Incognito and is a wonderful singer. She came out and sang on ‘Soul On Soul’, an urban A/C song written by John Capek and Marc Jordan. I sang on my last CD. We thought about a duet this time around, but it wasn’t the right situation. Just the same it was fun for me to have a great singer in my studio and build a track for her.”

Steve Sykes handled engineering duties. “He’s recorded some of the jazz greats,” Braun beams, “such as Stanley Clark and Freddie Hubbard. He’s a real Al Schmidt-category kind of engineer. I’m particularly happy with the way this record sounds. It’s recorded in the total digital domain. I mixed it down to 24 bit, which is the best resolution that I can get going here. I used a new 24bit ADAT which sounds tons better than the old one.”

Like many of his contemporary jazz peers, Braun has received some flak from critics. He takes it all in stride, though. “I think the accurate label for what I do is non-existent, because it’s really instrumental. And I suppose jazz is the only other instrumental music that’s really well known, but it’s really not jazz. It’s more like instrumental R&B music than anything.

“Of course, there’s some improv going on and sometimes my music in particular does lean towards straight ahead. I’ll have a funky loop going on and I’ll be playing bebop over top of it.” I don’t mind the label ‘smooth jazz’, because the other classification was ‘new adult contemporary’, which is more accurate, but how romantic does that sound. If it wasn’t for the growth of ‘smooth jazz’ and ‘NAC’ radio stations, there would be a ton of us instrumentalists who would have absolutely no place to go with our playing.”

He continues and speaks of his influences, which surprisingly are quite traditional. “I love playing straightahead jazz, some of my major influences and inspirations on trumpet were: Miles Davis, Lee Morgan, Chet Baker, Freddie Hubbard, Clark Terry, and Dizzy Gillespie. I wanted to play like them. Of course, first of all was Herb Alpert who was a pop artist. But after I started to listen harder and I want more from the music. As I was learning the instrument, I wanted to learn these wonderful complicated lines and how to navigate between these strange chords that I was hearing. For me that’s why it’s such a great challenge is to figure out how to play these changes.

“That’s one of the reasons I covered ‘Body And Soul’, because I love that tune. It goes to wonderful places harmonically. I’m hopeful that at some point I can do a standards record. That’s something I would really like to do. Maybe even do a straight-ahead record; there’s talk about it with the label. They’re supportive of that, but it’s something that would have to be a totally separate animal.”

Summing up, he adds, “I think it’s my job to go out and entertain people. I used to play in a lot of R&B/soul bands. Rod Stewart was an inspiration, he’s a heck of an entertainer and I played with him for about 4 years. To see that guy go out in the middle of Wembley stadium, just jump out into the audience, and walk around singing a song was unbelievable. People love the unexpected, and they love to get an opportunity to be close to you and hang out. It’s kind of special for them and fun for me too.”

I’ve got a Gebson custom series with a removable bell and it’s a large bore horn. My flugelhorn is also a Gebson, it’s a lightweight bell flugelhorn. I’m playing on Joe Marcinciewicz Music Products (mmp) mouthpieces. As far as my setup on stage, to get my sound, I use a AKG 419 microphone, a clip-on condenser mic that I love the sound of. The problem with micing a Harmon-mute is that if you move a quarter of a inch it changes the sound. Because of that it’s essential that you have a mic that’s a clip-on. I use a wireless setup for live which is also an AKG VHF system. I use a Quatro-Verve 22 to get the effects. I’ll send the effects that I have to the board/house, so that I’m not dependent on each system that I encounter on the road. So I carry my sound with me, so that my sound will always be the same. Occasionally, in the studio I will still use the 419 to go into my Yamaha O2R. I’ve experimented with some very high quality mic pre’s, especially on the Neeves 1272 mic pre’s. I found that I need that high end sizzle that I get with the solid state piece. When I’m playing flugelhorn I have a C-12 capsule 414-it’s called a TL-2 an AKG mic that I play into for my flugelhorn sound and trumpet sound as well. I’ll put that through a Manley optical compressor. The chain is the microphone to the TL-2 into a 1272 mic pre into the Manley optical compressor and that goes directly to tape. That’s a nice sounding signal path. The Neeve 1272 is a vintage mic pre that gives you that classic sound.

“The new Gato (Barberi) record, I just listened to that last night. I love Phillipe Saisse, his production is wonderful. Also Gato’s Last Tango In Paris. I was knocked out from that time on. He’s got that sound that’s unbelievable, he’s pouring his heart out on every note. I also have John Coltrane’s Ballads on my turntable. That’s a really special record. One record that’s really been in my head lately is Herbie Hancock’s Head Hunters. I’m really craving to hear that again, what a landmark record that was for the music business! I think I’m going to pick that up.”