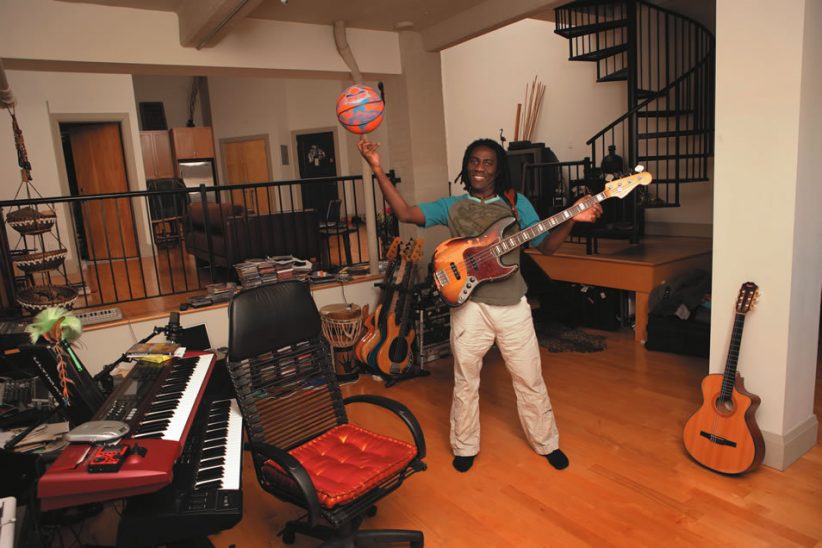 An awe-inspiring view of the Manhattan skyline provides the backdrop for Richard Bona’s spacious loft in Prospect Heights, Brooklyn. While the neighboring old brownstones are no more than three or four floors, Bona’s renovated co-op building towers over the area at 10 stories, providing him with an eagle’s eye view from his ninth floor perch.

With a 22-foot ceiling in his cavernous space, Bona could easily bring in a portable hoop and backboard and shoot baskets at home. Instead, the 39-year-old native of Cameroon prefers to go to the playground across the street and engage in highly competitive pickup games on the court with people half his age.

“Usually my place is kind of empty,” says the jovial musician, who switched from guitar to bass after encountering the hugely influential Jaco Pastorius album as a teenager in his tiny village of Minta. “I like a big, airy space, not cluttered with a lot of junk. And I don’t have any curtains in my place because I like that very open feel. I like the sun to shine in.

Bona moved to Brooklyn after seven years in noisy Manhattan. “Here in Prospect Heights, it’s really quiet. I love that,” he says. “When you come off the road, you need to feel like being home. Home must be almost like a church where you get your resource sparked. But I wasn’t feeling that way anymore in Manhattan, where I had a tiny apartment with a very low ceiling.”

There is very little furniture in his home space, save for a couch that is strategically positioned in front of a massive Sony Trinitron high-definition TV. Adorning the walls and situated around the space are various knick-knacks, mementos and souvenirs Bona gathered from tours he has made around the world with Pat Metheny, Mike Stern, the Joe Zawinul Syndicate, Harry Belafonte, Steps Ahead and his own band. An African mask that he picked up in Egypt hangs on one wall. In one corner is a table from Indonesia. An oud that he bought in Turkey hangs on another wall next to a decorative piece of art from Japan, and an artifact from Indonesia hangs on an adjacent wall. “I want my house to have all kinds of elements from around the world,” says Bona, who moved to New York from Paris in 1995.

There are 16 basses in their cases stacked up next to his bed, and on top of a wooden bureau from China is his 2002 Grammy Award for playing on the Pat Metheny Group’s Speaking of Now. A spiral staircase inside Bona’s loft space leads to a rooftop deck where he convenes at night to chill, work out songs on his Taylor acoustic guitar and gaze at stars while sitting on an 80-year-old bench from China. “I always like to have a terrace where I can go up and look at the sky. I love being outside. I grew up being outside. So I love this terrace. You don’t find places like this in Manhattan.”

Indeed, Bona has found a gem in this renovated warehouse–and yet he may be forced to leave, if billionaire real-estate developer Bruce Ratner has his way. The owner of basketball’s New Jersey Nets has announced plans to move his NBA franchise to Brooklyn and build a massive domed sports complex on the vacant rail yard just below Bona’s lofty view. In fact, Ratner wants to buy out all the tenants of this gorgeous co-op so he can raze the building. “He’s offering people twice what they paid for their place,” says Bona. “But I don’t know where else I could go to get this much space if I had to move.”

Many of the residents of the building have banded together to resist Ratner’s efforts to locate a sports facility in their neighborhood. But as Bona notes, “I love Brooklyn, really, and I would hate to leave. But, you know, billionaires who are connected to politicians tend to get what they want. And this guy Bruce Ratner–he’s got bread, man. Remember, we’re in America. Money talks. You can’t fight this guy. He’s way too powerful. But that view up on the terrace–that’s the thing that would be hard for me to leave.”

Until that day comes, Bona is taking it one day at a time, living in the moment for the music, which occupies roughly 90 percent of his waking hours. He’s excited about Tiki (Universal Classics), scheduled to come out April 25. Recorded in Rio de Janeiro with a cast of renowned Brazilian musicians, including guitarist Toninho Horta and singer-songwriter Djavan and percussionist Marcos Suzano, along with Indian vocalist Susheela Raman and Americans Vinnie Colaiuta on drums and Mike Stern on guitar, Bona’s fifth release as a leader carries the same buoyant world-music appeal of his previous releases. Along with a collection of originals sung in his native Duala language, Bona also covers the obscure, previously unissued Pastorius composition “Three Women,” with strings arranged by Gil Goldstein. The CD represents the same sort of expansive musical view that matches the shining panorama outside Bona’s home.

“I don’t have any particular diet; I eat all kind of food. I love Japanese and Thai food and African food. And that’s the good thing about Brooklyn: I have three different restaurants close to me on Fulton Street that have African food. They’re Senegalese restaurants but they cook all kinds of food from Western Africa. But some days I just want to have a burger.”

“I have a Mac desktop at home and I also have two different Mac laptops for different reasons: one for music when I am on the road so I can record anytime, anywhere; the other is for my e-mails and business stuff.”

Sony surround-sound receiver with a pair of compact Genelec speakers.

“I love basketball. Growing up in Africa, I played basketball every day. My hero was Michael Jordan. I wanted to be like Mike. Now I go across the street and dunk over those kids at the playground. I can still jump, trust me.”

“I don’t know how to enjoy vacations. I get bored and nervous. I went to Costa Rica once…it was beautiful, but after two days I told the person I was with, “Look, I’ve got no business being here. I miss my bass, I miss my home. I’m going back to New York.” I hired a private plane to the capital city so I could go back home. The vacation thing is not for me.”