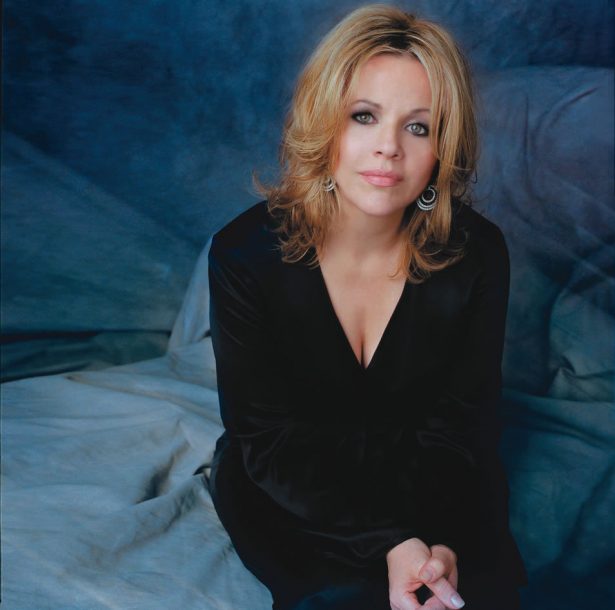 Renee Fleming is a familiar sight on the Metropolitan Opera stage. But one evening in the middle of May, the 46-year-old American soprano-celebrated as one of the great operatic voices of this generation-took command of a far more intimately sized stage some 60 blocks south of Lincoln Center. Joined by pianist Fred Hersch, Fleming was appearing at Joe’s Pub for two sets to celebrate the release of her newest album, Haunted Heart (Decca), with Hersch and guitarist Bill Frisell.

Packed with suits and celebrities, the audience for the 7 p.m. set looked like they had followed Fleming downtown rather than being regular patrons of the cabaret. Any listeners looking for the voice Fleming brings to Handel, Strauss, Verdi or Puccini was in for an enormous surprise, however: The soaring, golden resonance of her operatic voice was replaced by a dark, velvety sound pitched in a far lower register, cast in an entirely different color and texture. From a wistful, bittersweet reading of the Beatles’ “In My Life” that had audience members crying to an insouciant version of the Cole Porter classic “Love for Sale,” Fleming laid bare a facet of her artistry far removed from the grand gestures of opera.

With the notable exception of Eileen Farrell, most other classical singers who have attempted to sing in other genres have met with artistic or commercial disaster, unable to shake either the classical idiom or the sense that they had gone “slumming” by dipping into another style unworthy of those who grace the high altar of classical music.

Singing jazz, standards and pop is nothing new for Fleming, however. While she was still an undergrad at the State University of New York at Potsdam singing jazz at a bar off-campus, the vocalist was invited out on tour by Illinois Jacquet.

“I haven’t sung jazz since my student days, but I listen to it constantly,” Fleming says. “It’s part of who I am, and always has been.” (Indeed, during a chat we had last year, the singer raved about Kurt Elling’s latest album and the mixing sessions she had just sat in on for Paul Motian’s ECM release I Have the Room Above Her with Frisell and Joe Lovano.) The same week of the Joe’s Pub performances, Fleming also gave the world premiere of two new song cycles by Brad Mehldau at Carnegie’s Zankel Hall.

Named after the Dietz-Schwartz tune that opens the album, Haunted Heart ranges over a broad array of repertoire. Aided by Hersch’s impeccable settings, Fleming lets her omnivorous musical tastes dictate her song selection. “These were intuitive choices,” Fleming says. Yet a spark of some deeper connection links many of her choices: for example, the stunning and absolutely gorgeous pairing of an excerpt from Alban Berg’s opera Wozzeck and Lionel Hampton’s “The Midnight Sun,” bridged by an improvisation by Hersch.

“I was sitting in the audience at the Metropolitan Opera, listening to Wozzeck,” Fleming recalls, “and I heard in Berg’s writing jazz harmonies that were almost like Bill Evans’. And the Berg and the Hampton song share images of blood and the moon, too.”

Despite what some of her classical colleagues and listeners might think, the soprano clearly considers all the music on the album, from Joni Mitchell’s “River” to Stephen Foster’s “Hard Times Come Again No More” to the Schumann song “Liebst du um Schonheit Op. 12,” to be created equal. “I have enormous respect for all this music,” Fleming says. “In fact in recital a long time ago, I sang some Duke Ellington, and I called him then one of America’s great classical composers. Jazz really is our classical music.” While certain jazz luminaries from the jazz world often repeat this sentiment, it somehow carries a different resonance when spoken by someone of Fleming’s stature within the classical realm.

Her admiration extends to her Haunted Heart colleagues, both of whom Fleming specifically sought out. “The truth is that I am just a huge fan of both of them,” Fleming says emphatically. “I hear them play live whenever I can, and I travel with their recordings.”

The admiration goes both ways. “I didn’t know that she had this jazz background,” Frisell says. “But I was on a long drive once with my wife listening to some of her opera CDs, and we were both crying as we drove along, Renee was so unbelievably beautiful.” Once they got into the studio together, Frisell adds, he observed another dimension to her singing. “She is a total, natural musician who really responded to what we were playing, and I really hope that we’ll be able to work together again.”

Hersch, who calls the ballads and lingering songs that make up Haunted Heart an “after-hours album,” agrees. “As Renee says, a song is a song is a song,” he says. “And playing standards is a great litmus test: it lets you know who the performer really is as an artist. This album is Renee’s statement. All this music, from all these wonderfully diverse sources, can live together.”