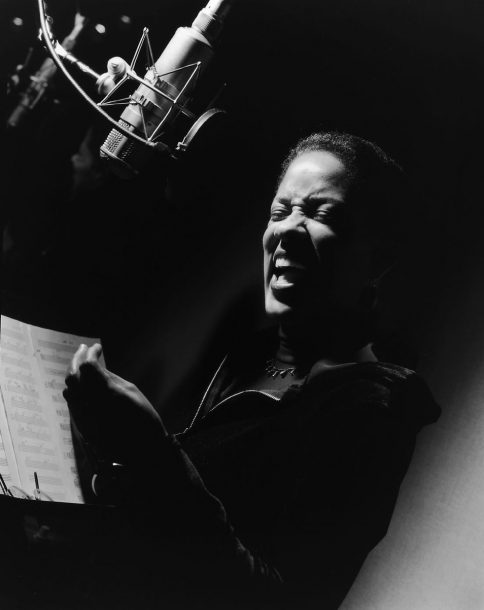 Had it not been for her son’s prodding, singer-songwriter René Marie’s musical career might have ended when she was 18. In high school, she sang with a neighborhood R&B band in Roanoke, Virginia, and performed solo at a cafeteria that had a grand piano in its foyer. “I’d had a few years of piano lessons,” she recalls, choosing her words as thoughtfully as the notes she sings. “I sang and played some of Roberta Flack’s tunes, ballads with fairly simple chords, along with a few things that I’d written. But then I was married at 18 and got pregnant early, so any thought of continuing to perform fell by the wayside.”

For the next two decades, Marie worked at a variety of jobs, including a seven-year stint in a bank’s customer service division. Awakened to jazz while watching the movie Lady Sings the Blues, she began buying recordings by Billie Holiday, Ella Fitzgerald, Sarah Vaughan, Nina Simone and Cleo Laine. “At that point,” she recalls, “my performing consisted of singing and dancing for my two boys, and writing a few songs.

“Then one night my older son, Michael, who was home on college vacation, went out to a restaurant where he heard a woman singing with a pianist. He came home and said, ‘I know you can sing better than her, Mom, and she’s getting paid for it!’ I went over to the restaurant that night and he was right. I had never sung jazz in public, but my sister-in-law played a bit of jazz piano, so we worked up six tunes. A month later, we went back to the restaurant and asked the musicians if we could perform during their break. They were very gracious and the response was so great, we ran out of tunes.”

Initially, Marie had trouble launching her career. “The local musicians didn’t want to play with me because they didn’t know me. A friend let me sit in with his jazz group and I learned a lot about keys and tempos. They were very patient with me.” By 1997, she had her own band and began appearing at clubs and festivals in Southern Virginia and Pennsylvania. She made a demo and her bassist, who had a program on the local NPR station, played it on the air and was flooded with calls from listeners inquiring where they could buy it. That led to Marie’s self-produced debut CD, aptly titled Renaissance, released, under her married name, René Croan, on the Salem, Va., label Flat 5.

“While I was recording Renaissance, my marriage fell apart and, because of a bank merger, I had to relocate to Richmond, Virginia. At first, this was something of a setback be-cause I had to find new musicians and new venues to play. Then, suddenly, everything took off. I had a strong band and began getting enough work so that I could fi-nally quit my day job. The night I made my Washington, D.C., debut at Blues Alley, Richard McDonnell of MaxJazz records was in the audience and offered me a contract at the end of my first set.”

How Can I Keep From Singing?, the Artist Formerly Known as René Croan’s first MaxJazz release, finds her at ease in a New York studio performing a program of standards and originals backed by a heavyweight sextet featuring pianist Mulgrew Miller, saxophonist Sam Newsome and percussionist Jeffrey Haynes. “I love MaxJazz’s spirit,” she says. “So many people in the music business are caustic, but Richard and his staff conspire to be kind. They allow me so much artistic freedom and are always there as cheerleaders whenever I begin to doubt myself.”

For her future, Marie lists three goals. “I want to write more diverse songs than I have in the past. I’d also like to sing more with big bands.” And the third ambition? “I want to get a new car. The one I’ve got isn’t going to last much longer.”