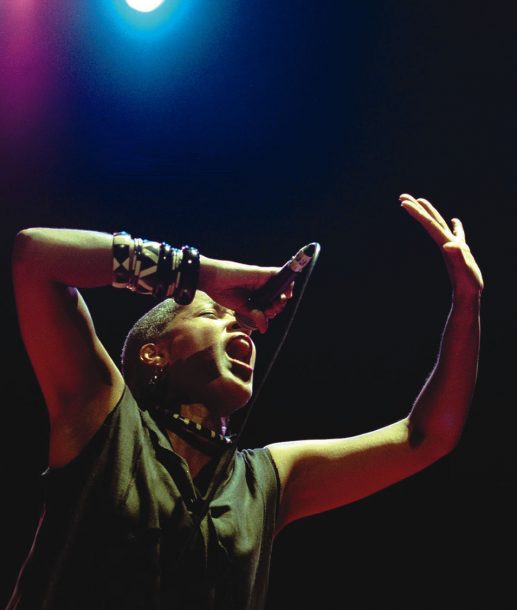 When Colorado-based jazz singer René Marie first performed her arrangement of “Lift Ev’ry Voice and Sing” and “The Star-Spangled Banner,” she knew she’d created a song that made her feel like an American.

“After I sang the song for the very first time, I thought, This is the way I want to sing these two songs from now on,” the jazz singer said from her home in Denver, Colo. The arrangement combines the poetic and hopeful lyrics of what’s known as the “Black National Anthem” with the time-honored melody of the country’s official national anthem.

But despite her intent of artistic expression, Marie sparked a media firestorm this summer when, after being asked to perform the national anthem at Denver Mayor John Hickenlooper’s State of the City address on July 1, she sang her piece instead (the performance is viewable on YouTube). The buzz started when a local councilman, Charlie Brown, discussed the performance on a local talk radio show. The station latched on to the phrase “Black National Anthem,” which caused much of the stir, she said.

Many were furious that she would have the audacity to “change the national anthem.” Commentators like Fox News’ Bill O’Reilly and online media forums bubbled with outrage that an artist would seemingly disrespect the country by not singing the traditional anthem that she had been asked to.

The controversy quickly became political. Her song sparked debate about the role of race in the upcoming presidential election, and about the importance of the First Amendment.

Marie composed the piece-part of a three-part suite entitled “Voice of My Beautiful Country”-after she realized she didn’t truly feel like an American. By reworking the melodies and lyrics of songs like “America the Beautiful,” “My Country ‘Tis of Thee,” “Lift Ev’ry Voice and Sing” and “The Star Spangled Banner,” Marie said she could express her own version of love for her country that represented her personal background of growing up in America, a background with its roots in a segregated, Southern town.

When invited to sing “The Star-Spangled Banner” by the Denver mayor’s office, Marie accepted. But she knew she would be performing her arrangement of the anthem, and did not notify the mayor’s office beforehand. She felt sure that if she told the mayor what she intended to sing, she’d be denied. She feared losing the chance to let her song out at all.

“This door had opened to me,” she said.

It was a door Marie had already walked through. She’d previously performed the piece in the Denver area, even in front of Colorado Governor Bill Ritter, and the reaction had only been positive.

“The response was just amazing,” she said. “People were coming up to me crying and saying, ‘Oh, my God, I have never been so moved,’ and they kept saying, ‘Do you have a recording?'”

After realizing how profoundly the song moved people, Marie put recordings of the suite up for free download on her Web site. Consequently, Marie was shocked when the reaction from the July 1 performance was so extreme.

After singing the anthem on that day, Marie said she received several compliments-City Council President Michael Hancock, who introduced Marie, was one of the few who noted her performance.

“Michael Hancock came over to me and said, ‘Wow, you have a beautiful voice; where can I buy your CD?'” Marie said. No one approached her with any misgivings, and the performance seemed a tranquil success.

After local media picked up the story, national media outlets followed. The Denver mayor’s office, after being flooded with calls and e-mails, gave out Marie’s contact information at the singer’s request.

In the two days following the performance, Marie received 1,200 e-mails from people all over the nation, the majority of which were insulting. Many called her a racist, questioned her morals, and some even threatened her life.

“The assumption was that I don’t want to live here, that I was complaining,” she said. Marie took the time to send replies to those who asked for her side of the story. She explained that her performance was not meant as a protest or publicity stunt, but as an expression.

Some even told her she was jeopardizing Barack Obama’s bid for the presidency. But Marie found that assertion particularly unreasonable. “If someone thinks a song like that can jeopardize a political campaign, they’re overemphasizing the influence of my song and underestimating the strength of his campaign,” she justified.

Marie says the response received from the public opened her eyes to how much pain many Americans still hold, pain that reveals itself in the form of fear and anger at others. Her performance, combined with the very real potential of a black president, may have brought some of that to the surface, she says. “If I had taken another song other than ‘Lift Ev’ry Voice and Sing’ and put those lyrics to the melody of the national anthem, there might have been a ripple, but I don’t think there would’ve been a huge backlash,” she said. “It’s a song black people typically sing. That was the part that got everybody all up in arms.”

To Mayor Hickenlooper, Marie’s choice was a distraction from the address itself. He told the Rocky Mountain News that it was “close to impossible” that Marie would ever perform at another city function.

Nat Hentoff, the highly regarded jazz critic and civil libertarian, found that announcement to be particularly alarming. A suggestion to ban her performance violates the First Amendment protection of freedom of expression, he says. “If James Madison came back from the dead, he’d be leading a picket line outside the mayor’s office,” he said.

Hentoff maintains that the criticisms of Marie are a perfect example of how much education is needed on what it means to be an American. “It’s supposed to be a post-racial environment,” he said. “Why should people be so offended at having the ‘Black National Anthem’ in tandem with the national anthem that’s supposed to be all-inclusive?”

Ask any American who believes in the First Amendment and they’ll agree, Hentoff says. But the reaction the public had to Marie suggests that people don’t understand what freedom of expression truly is about or they wouldn’t have been so offended by what she sang.

At this point, Marie’s biggest concern is how having so much controversy over her music could affect her creative decisions in the future. She doesn’t want to hold back because of fear. But, in the true spirit of the First Amendment, she plans to continue performing “Voice of My Beautiful Country,” and still has upcoming scheduled gigs in Colorado as well as national dates. “Jazz is supposedly this idiom where you can make statements like this,” she said. “Many musicians who play jazz do not want to rock the boat, which to me is turning your back on the very music that brought you there in the first place.”

Despite personal, verbal attacks, Marie didn’t feel angry with those she unnerved. “This has opened my eyes to a lot of stuff that’s going on in the country, and what people are thinking and feeling,” she said. “How can you get angry? How can you apologize for having done something to let all that out?”