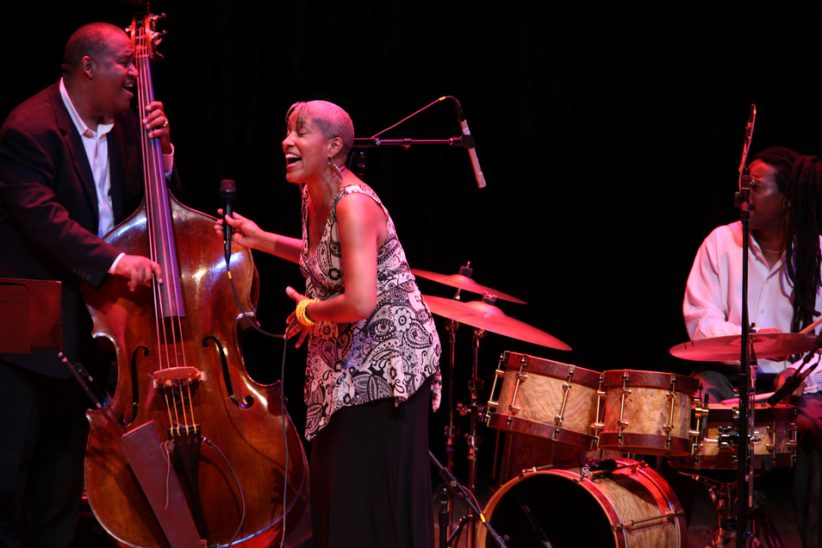 Although she is an Atlanta native who resides in Denver, it’s fair to say that René Marie has a special relationship with the Spoleto Festival and the city of Charleston, S.C. She has been a high-profile attraction at the annual performing arts festival for two of the past three seasons, and she recorded her most recent album, Experiment in Truth, on the College of Charleston campus, where most of Spoleto’s jazz concerts are staged.

There’s really no mystery surrounding Marie’s affinity with the Port City, since the member of her backup trio with the most seniority, percussionist Quentin Baxter, is a Charleston native-and, as the diva informed us during her 2009 concert at Gaillard Auditorium, the 28-year-old Baxter was the catalyst in bringing the other two members of the combo aboard, pianist Kevin Bales and bassist Rodney Jordan. After some persistent lobbying, Marie confided.

Over and over, Marie expressed contentment with her current trio, even dedicating a hard-rocking version of Mentor Williams’ “Drift Away” to her guys. Confidence, contentment and serenity were not the attributes you might have expected from the singer who had ignited nationwide controversy with her conflation of the “Lift Ev’ry Voice” lyric with the melody of “The Star-Spangled Banner” last July 1. Marie’s performance of her idiosyncratic “National Anthem,” preceding the Denver mayor’s annual State of the City address, raised more than a few conservative hackles.

Although she sang her anthem remix-at the climax of her “Voice of My Beautiful Country” trilogy-there was nothing confrontational or defiant in Marie’s tone. From the time she walked onstage, Marie professed a deep love for her country, and her mellow, luxuriant rendition of the traditional “Shenandoah”-pure and silken as Roberta Flack in her prime-bolstered her claim irresistibly. Her intro was semi-spoken, and Bales’ work at the keyboard, as she glided along the melody for the first time, was more like an alternative stream than an accompaniment, Debussy-like in its delicacy.

This was not the last of Marie’s newfound equanimity. She welcomed the audience into a couple of dreamy tunes. We learned the chorus of Marie’s “Colorado River Song,” and then we whistled it, giving the concert a momentary marshmallow-roast intimacy. When Marie segued from Jimmy Van Heusen’s “Imagination” to the Holland-Dozier-Holland “Just My Imagination” of Temptations fame, the audience once again chimed in. But we weren’t done with serenity until Marie sang her own setting of the “Serenity Prayer.”

Counterpoised with all this smiley, campfire fare was the edgy, gritty songwriting we expect from the artist who, at Spoleto in 2007, railed against the constraints of record producers just before breaking out on her own label later that year. “O Nina” was a prime example of the material Marie hadn’t been permitted to put on disc until she cut her own Experiment in Truth. Two things that bring the best out of Marie are longform musical explorations and lyrics with an activist bite. A sizzling tribute to the fearless spirit of Nina Simone, “O Nina,” is both, conjuring up Marie’s liberating experience of discovering Simone’s music as a teenager. The song also serves as a launching pad into Simone’s most recognizable rep-including choice snippets from “Four Women,” “Strange Fruit,” “Mississippi Goddam,” “Young, Gifted and Black” and “I Loves You Porgy”-while the arrangement leaves plenty of space to accommodate Baxter’s pulsating African drumbeat under Bales’ majestic soloing.

“This Is Not a Protest Song” has seen a couple of recorded incarnations, on Marie’s Truth album and on a single whose proceeds are entirely directed toward the Colorado Coalition for the Homeless. They disagree slightly on the title, with the album enclosing “Not” in parentheses. Be assured, then, that this review relies upon the song list Marie provided to us after the concert via Spoleto jazz director Michael Grofsorean. Written as a show of solidarity for Marie’s homeless brother, the song pleads for tolerance-and a helping hand-toward a homeless brother, an unwed mother and an abused wife in successive stanzas. Coming immediately before the Simone tribute, the resemblance between “Not a Protest Song” and Simone’s “Four Women” may have eluded some in the audience, but it was inescapable upon further reflection. Jordan initiated the righteous arrangement and had a deeply affecting bass solo before Marie’s final refrain.

Musically, the most adventurous cut was Grace Slick’s “White Rabbit,” tucked into the program right before “Drift Away.” Freer and fleeter than “Shenandoah,” the “Rabbit” arrangement had Bales reaching down into the piano’s strings at the beginning while Marie emitted weird, disjointed vocalese. Gradually, the two evolved into regular 4/4 time and Slick’s lyric, but the kaleidoscopic nature of the chart persisted after Marie and Bales synchronized.

In all, six of the 10 numbers on Marie’s set list haven’t been issued on disc, a hopeful harbinger that a new CD is nearing the assembly line. “Shenandoah” and “White Rabbit” will be major additions to Marie’s canon, and her fans will certainly savor the “Imagination” medley and “Drift Away” if they’re included in the package. “Serenity Prayer”? Not so much. The remaining song, Dave and Iola Brubeck’s “Strange Meadowlark,” had the audience clapping rhythmically to Bales’ blues-drenched solo. The Brubecks and the critics will likely have a similar reaction once Marie and her new label bring this version to market.