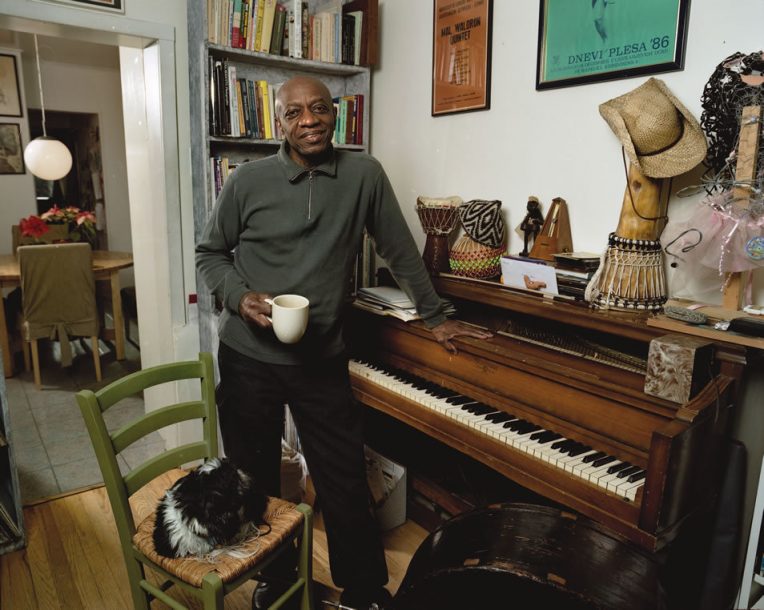 Reggie Workman smiles warmly when our JazzTimes contingent rolls up to his door on a quiet, residential block in Montclair, N.J. But Julia, his black-and-white Shih Tzu, simply can not contain her glee. Her ecstatic welcome dance lasts a good five minutes. Workman ventures a guess as to what’s going through the dog’s mind: “Real people! I don’t have to hang out with this boring guy all day!”

Boring? This hardly describes Workman. An unassuming master of the music, Workman, 67, a Philadelphia native, migrated to the New York area in 1958, and his achievements as a bassist, bandleader and educator have yet to stop piling up. He recorded and toured with John Coltrane’s classic quartet, shared the bandstand with Freddie Hubbard and Wayne Shorter as a member of Art Blakey and the Jazz Messengers, subbed for Ron Carter in the mid-’60s Miles Davis quintet and has appeared on some of the greatest jazz albums ever made.

Workman and his wife, the Slovenian choreographer Maya Milenovic, have made their home in Montclair since 1993, a year after the birth of their daughter, Ayana. (Workman’s grown daughter, Nioka, is an accomplished cellist.) Together, Workman and Milenovic are a pedagogical force-they codirect a local prekindergarten program, a jazz-and-dance summer institute in Slovenia and the Montclair Academy of Dance and Laboratory of Music, along with its performance arm, the North Star Navigators Youth Theater. In their living room there is a rail affixed to the far wall, a leftover from the days when the dance academy was home-based.

It’s no exaggeration to say that Workman’s life revolves around education. He is a full-time professor and curriculum coordinator at the New School University’s jazz and contemporary music program. “I’m concerned about working with the young students, to get them interested in passing the ball to the next generation,” he says, although collegiate jazz is only one facet of his teaching. He mentions Howard Gardner’s theory of “multiple intelligences,” and believes students of all ages are best served by a thorough intermingling of arts and academics. “We plant the seed with the little ones at the pre-K,” he says, and ideally, the process continues, through young adulthood and beyond. “It’s one community,” he adds, noting that the children of Billy Hart, Wallace Roney and Geri Allen and others have come under his tutelage.

Milenovic also helps out with Workman’s performance career. There are several ongoing projects: Ashanti’s Message, featuring the remarkable pianist Yayoi Ikawa; Statements, a group involving some of Workman’s Slovenian students; W.A.R.M., a fledgling supergroup with Pheeroan akLaff, Sam Rivers and Roscoe Mitchell; and a Coltrane Legacy band employing Charles Tolliver’s transcriptions for big band and choir. There is also Trio 3, Workman’s spellbinding collaboration with Oliver Lake and Andrew Cyrille. Juggling these groups and teaching full-time leaves room for little else, but this accords with Workman’s philosophy of life: “Find out what things you can handle, the things that are important to you, and concentrate on that, do that well.”

Workman is a health-conscious person who prefers not to dine out: “You don’t know what you’re getting.” Before moving to Montclair, he and the family lived in a Jersey City condo, in “an area where the military used to have all their factories, and they dumped radon into the ground, and people were dying from cancer. You couldn’t drink the water.” Montclair also offered better schools.

The move was just one instance of Workman going the extra mile for his family. He shaved his head some years ago, at Ayana’s urging. “She loves Michael Jordan,” Workman explains. “I made a deal with her: I will shave my head if you will stop being careless, and do the things you’re supposed to do. She did her part, so I did my part. Now she’s after me to get an earring, but I don’t think so.”

“I am learning. I’m in touch with young musicians, and that’s their world. This has to be part of my world too, to stay in tune with the new energies. I just got Sibelius; I’m learning that program. I’ve got to get a bicycle and catch up!”

“A Ford Taurus wagon, which fits the bass travel case. I had to choose a car according to the size of that case. But I usually commute by bus to New York, because I can’t afford to park.”

“I like the [Caribbean] islands, I like Brazil, I like Japan, I like Florence. I love the world. It just depends on what’s around you. The buck stops here-your favorite place has to be where you are, under any circumstances.”

The shelves are overflowing with books, but Workman singles out Michael Levine’s Deep Cover (a critique of the drug war), Charles Mingus’ Beneath the Underdog, Valerie Wilmer’s As Serious As Your Life and Lucien Malson’s Histoire du Jazz et de la Musique Afro-Americaine.

“I haven’t eaten red meat since 1958, but I eat fish and fowl. My father was a chef, and I used to cook a lot when I was younger. I don’t do it as much anymore-as a matter of fact, I’m in the doghouse because I don’t cook as often as I could for the family. Where I need to find the time to cook is in front of the keyboard or on the bandstand.”