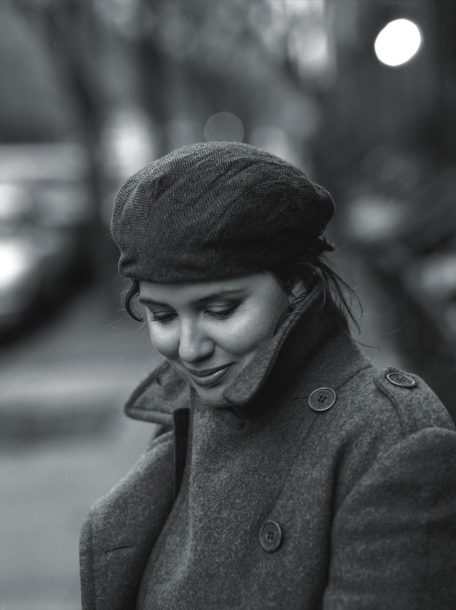 I think all my records have a roundness to them,” says singer-songwriter Rebecca Martin. “Some records are angular, but I think of my records as big circles.” On The Growing Season, her fourth solo release and her debut on the Sunnyside label, Martin widens the circle, nourishing what she calls her “imaginary world-the ideal of having a place to be truthful, but it’s soft and warm, non-threatening and safe. It’s sort of my dream. Songs are the perfect combination of all the things I think are healing and good.”

The Growing Season is circular in another respect: It features Kurt Rosenwinkel in a reprise of the guitar-piano role he played on Once Blue, Martin’s 1995 collaboration with fellow songwriter Jesse Harris. While the Rosenwinkel-Martin bond never dissolved-the guitarist also appeared on Middlehope, her more jazz-oriented disc of 2001-The Growing Season has raised the bar, eliciting the best from friends who’ve seen no lack of artistic progress in recent years. Rosenwinkel produced the album; he’s credited on guitars, piano, keyboards and even vibraphone. “Making music with Kurt is a little like being a dream state, which is where I am when I’m writing lyrics,” says Martin from her home in Kingston, N.Y., where she lives with husband Larry Grenadier and their young son, Charlie.

Not every songwriter is able to draw on years of rapport with high-echelon jazzers, including bassist Grenadier and drummer Brian Blade, who join Rosenwinkel on The Growing Season. This group, with Pete Rende on piano, also backed Martin during her weeklong run at the Village Vanguard in mid-August.

Rosenwinkel and Blade have led countless dates at the Vanguard. Grenadier knows the bandstand intimately from working with Brad Mehldau and FLY. Martin, too, performed there with the great Paul Motian following the 2006 release of his On Broadway, Vol. 4: Or the Paradox of Continuity. Convinced of her jazz bona fides and all-around artistry, the club opted to welcome Martin back as a leader. “What I love about the Vanguard,” she says, “is that it’s about making music, not about being a superstar, all the things I don’t like at all-how you look, all that stuff. It doesn’t matter there. It’s all about being a good musician.”

For the same reason, Martin doesn’t dwell on the issue of artistic categories. “I don’t know what to call what I’m doing,” she states. “It sounds like pop to me, played by great musicians who have inspired me to write harmony that I suppose people think is unusual. But it’s certainly nothing new. I mean Joni Mitchell, Steely Dan, c’mon.” One could also note that instrumentalists as highly regarded as Jenny Scheinman, Tony Scherr and Kevin Hays are pursuing identities as singer-songwriters. Blade played acoustic guitar and sang on “Trembling,” the closing track of his 2000 album Perceptual.

Martin goes on to explain how rendering jazz standards with Motian has informed her work across the board. “It showed me how to sing less and rely even more strongly on communicating,” she says. “That was a big turning point for me, and something I think about all the time now, being that way in whatever context. There’s no need to yell.”

In the end, Martin’s bandmates don’t merely respect what she is doing-they pour their own hearts and sensibilities into it. There are flashes of light and heat during “What Feels Like Home,” “You’re Older” and “Free at Last” that seem closer to the Brian Blade Fellowship or Rosenwinkel’s group than to any pop songwriting. Martin asserts her individuality even as she dives into the big circle, the subtle and sometimes volatile group sound.

“The Space in a Song to Think,” which leads off The Growing Season, has the stuff of a classic-a tight melodic arc, framed by Rosenwinkel’s hip, active Rhodes chords and Blade’s immaculate beat. Martin sings of interior journeys, of love lost and regained, but of larger forces as well. She wrote “Make the Days Run Fast” when her younger brother, a pediatric neurosurgeon, went to Iraq and suffered a gunshot to the leg while in the Green Zone. “As for You, Raba,” co-written with Rosenwinkel, was sparked by a 2003 report in The Nation on the plight of Iraqi women following the eruption of chaos in Baghdad: “Waiting in the quiet/On her back while they attack … /Fields and fences/Watching defenseless/As they take her down.”

Martin’s lyrics have a way of balancing bright and dark sentiments-diverging routes to wisdom and fulfillment, perhaps. “Keep your thoughts warm and forgiving,” she sings on “It Won’t Be Long” from her 2004 MaxJazz release People Behave Like Ballads. “When your mind is a big black box/Filled with ugly thoughts/Be brave and open it,” she offers on “To Prove Them Wrong” from the new album. Martin recognizes the tension but declines to resolve it. “Creating spaces that allow a person to slow down and be truthful is a big theme in my life,” she muses. “I like to see what’s behind everything.”