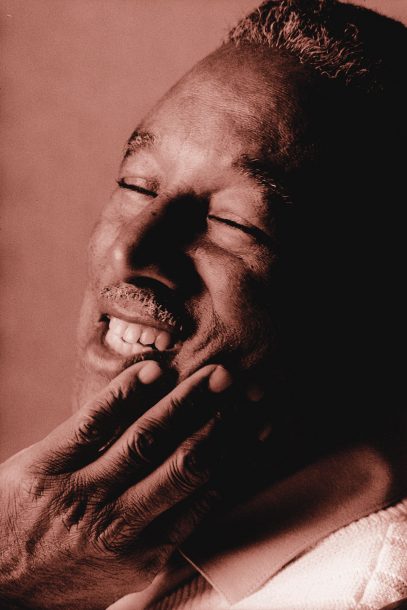 Bass line solid as an old oak, tone fat and sure as grandma’s biscuits, time impeccable, as dependable as running water. The images endure, from old black and white film images of Dizzy Gillespie’s historic bop big band anchored by that fresh-faced kid over in the right hand corner of the picture, the one so gracefully wearing the band uniform replete with epaulets, the youngster playing such earnest and sure time on the bass, the one destined to grace countless bandstands and influence generations of bassists to come. In the lineage of living bass players, Milt Hinton stands as grandfather, Ray Brown as the daddy of ’em all, certainly the father of the modern jazz approach to the bass.

From the time he hit the scene in 1945, his bandstand exploits read like a scaled down version of a jazz dictionary, and lately he’s taken to inviting a raft of friends onboard his recent series of recordings on the Telarc label.

Additionally Brown is serving as mentor to a number of young pianists and drummers as he continues feeding his road warrior appetite at the helm of potent trios. We caught up with Mr. Brown at his SoCal home during a holiday respite from the road. With two Pittsburgh natives in the conversation, talk turned to how much that storied jazz birthplace had to do with his quest to play jazz.

Ray Brown: Probably a lot. There was more music per square foot in Pittsburgh than anyplace in the world. When I was a kid they had two theaters going 52 weeks a year; one was in the black neighborhood and one was downtown. The theater in the black neighborhood was the Roosevelt, and they usually had black bands and shows. Downtown had the big shows, like Ellington, Basie, Cootie

Williams with Ella Fitzgerald and the Ink Spots, Charlie Barnett- that kind of stuff. They had two musicians unions in Pittsburgh, one black, one white. The black union had a little club on the second floor and they had jam sessions every night starting at midnight. The musicians from both theaters, and the local musicians all met there and jammed all night until 6:30 in the morning! I was too young, but I would sneak in there and listen. That kind of activity spawned so many musicians; if you look at the number of musicians that came out of Pittsburgh, there must be more than anyplace in the world.

JazzTimes: At what point did you enter that scene?

I was just starting to get into it, but when I got out of high school I went out on the road three days later. So I went with a guy named Jimmy Hinsley, he had a six -piece band and we opened in Buffalo at the Moonglow. I had wanted to go on the road before I finished high school, I had an offer and I coulda gone with Cootie Williams’ band, but my mother and father said ‘no way, “you finish school first.”

JazzTimes: You’ve worked with practically a who’s who of this music, from Duke to Ella and onward. What have been some of your most rewarding affiliations?

I got something from so many people, going back to Pops, Basie, Ellington, all the saxophone players-all the horn players really, and people like Tatum. The list would be long if I started naming them.

JazzTimes: As a bassist, what did you get from horn players?

JazzTimes: Early jazz bass players were relegated to a role that didn’t encourage much soloing. At what point did bass players realize the potential for a solo role?

You got the first breakthrough with Jimmy Blanton, who broke the ice for everybody, then Pettiford, and then it just went on from there.

JazzTimes: You’ve influenced generations of bass players and have most recently nurtured a lot of young talent. What advice do you have for young bassists?

JazzTimes: The bass is one instrument that has made tremendous advancements since you first started playing, perhaps as much or more so than other instruments inthe band.

I think so, it has certainly had further to come, especially due to the fact that the bass wears two hats all the time. It’s a time instrument, that’s not going to disappear. There’s nothing like walking into a joint and hearing somebody laying down some good time with a good sound; that’s not gonna go away. Sometimes that’s better than hearing somebody play a solo. I used to sit in a corner and just listen to Israel Crosby play with Ahmad Jamal and he didn’t need any solos; he played such great bass lines that they were like solos.

JazzTimes: Then you look at the other side and say maybe there are too many bassists taking too many solos that simply haven’t acquired the fundamentals.

That could be argued until you turn blue. Guys have just gotten out of the gate so everybody wants to be a soloist. People don’t normally give a bass player any kinda credit if he’s not playing some kind of solo. A lot of the fault has to do with writers, who if a guy plays a lot of notes, they automatically say he’s a bitch, they don’t say nothing about his rhythm. They say, ‘this guy plays so fast, he’s the best we’ve ever heard.’ Why? You’re not in a race, ya know? I was driving my car yesterday and a string orchestra came on and Louis Armstrong was singing Sleepy Time Down South, and just the way he phrased and sang it, and then he played 16 bars, and it was just f…ing gorgeous. Not a lot of notes, but just all in the right place; that’s never gonna disappear. If writers didn’t put so much emphasis on bass players playing solos and playing fast, you might get a little something different from this instrument. There’s nothing wrong with guys playing solos, you asked me why everybody wants to be a soloist, its because I think they’re made to feel that they have to be.

JazzTimes: What bass players are carrying the torch today?

I think Christian McBride is doing an excellent job. He’s covering a lot of [stylistic] bases now, but as far as playing rhythm, he’s got a great sound and he knows the instrument. His intonation is good, and he plays great time and can solo his butt off. The older guys, like Ron Carter and Dave Holland are of course excellent bass players…. Rufus Reid…. John Pattituci is another very good young bass player. These guys play all over the instrument.

JazzTimes: Does a lot of their proficiency stem from the fact that they’ve had a wider range of opportunities for expression on the instrument?

Bass players are given more room to solo than when I was coming along.

JazzTimes: So it is about the evolution of the music to an extent?

The evolution of the bandleaders too. In 1939 when Jimmy Blanton was coming out front at a dance and playing bass solos, people were looking up and saying, “what the f..k is Duke Ellington doing with this guy up here playing the bass, we can’t dance to that s..t!” Not saying, “wow, I’ve never heard a guy play the bass like that!” They didn’t because they’d never heard anybody play nothing but time. He was way ahead of his time, and this cat could walk the bass through a thunderstorm. Listen to some of those records man, he played some of the best time you’ve ever heard. That’s where I got my time from. He was absolutely my greatest influence.

JazzTimes: In recent times you’ve been working with a lot of younger musicians, like Geoff Keezer, Benny Green, Gregory Hutchinson, Christian McBride, Kariem Riggins, and several others. What is it about young musicians that make them attractive for your band?

The young musicians of today, guys in their early-mid twenties, are now good musicians; they play much better than we did in my time. Guys at 23-24 are playing as well as guys were in their early 30s were when I was young. I like working with the young musicians because if you want to play fast for half of the night they can do it, they don’t get tired. If I had three guys in my band my age, I don’t know what would happen the second set [laughs].

JazzTimes: How did your Some of My Best Friends are series on Telarc develop?

I came up with this idea about five years ago. I presented it to Telarc and said I want to do a series like that. At the time they weren’t too excited about it. Then about a year and a half later they came back and said, “let’s try that.” The first was with piano players, then saxophonists, then singers.

JazzTimes: What other guests would you like to invite?

Maybe trumpets, guitars, and then something with mixed instruments, like harmonica, vibes, and different instruments. Actually I’m gonna get back to doing some stuff with just the trio because I’ve got some stuff that we’ve been playing that I think will be of interest to the public. J

“The bass is not the same as other instruments,in terms of manufacturers names, and often there is a lot of misinformation. When a guy wants to buy a bass, he should blindfold himself and play, and buy what works best.” Polytone pick-up and amplifier. Thomastik strings.

Ray would not profess to listening to anything in particular at this time: “When I’m working a lot [as he is currently] I don’t listen to a lot of music. When I’m off I just grab something and play some music.”