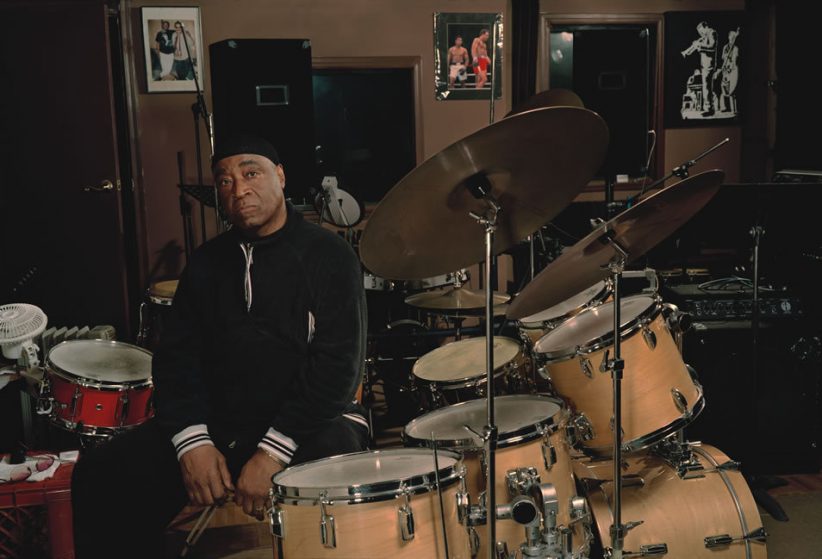 John Coltrane knew a thing or two about drummers. During his apprenticeship with Miles Davis, he played with Philly Joe Jones, who surely whetted his appetite for percussive petulance-so much so, that when it came time for Coltrane to form his own group, the saxophonist one-upped his former boss and hired Elvin Jones, maybe the only drummer of the era who could out-ass-kick Philly Joe. When Elvin couldn’t make it, another fire-breather, Roy Haynes, took his place. But Elvin usually made it. He stayed with Trane until the saxophonist needed something else from a drummer. When that time came, Coltrane turned to his fellow Philadelphian-turned-New Yorker, Rashied Ali.

Ali gave him that “something else.”

From the time he joined Coltrane in late 1965 until the saxophonist’s death in July 1967, Ali helped enable Trane’s final, most radical break with convention. The drummer’s skittering, high-energy playing fractured the pulse into tiny shards, which he reassembled, mosaiclike, into something that approximated conventional swing but was actually something quite different. Ali staked out new areas of rhythmic independence and sound exploration.

On late Coltrane recordings such as Live at the Village Vanguard Again! and Interstellar Space, Ali’s splintering of time paralleled the asymmetrical note groupings and convoluted phrasing that the saxophonist explored in full late in his career. Ali’s primary role was not to provide a rhythmic context, but to freely interact, to shadow and challenge Coltrane’s every turn of phrase.

After Coltrane’s passing, Ali became one of the leading figures on the New York avant-jazz scene, a position he holds to this day. In the ’70s, he founded his own record label, Survival, for which he’s recorded a string of raw and risky albums featuring such prominent avant-gardists as the late saxophonist Frank Lowe, violinist Leroy Jenkins and guitarist James “Blood” Ulmer. For several years he ran his own club in downtown Manhattan, Ali’s Alley, which was a major venue during the loft-jazz era of the ’70s. He’s led innumerable bands and played with everyone who’s anyone in the free-jazz community.

Today, Ali’s an elder statesman, yet he’s playing better than ever. And he’s still capable of surprising us, as proven by his latest releases on Survival, Judgment Day, Vol. 1 & Vol. 2. This is not the formally open, structurally abstract free jazz for which he’s best known. There’s plenty of blowing room, to be sure, but the tunes themselves are meticulously composed and arranged. It swings in a way guaranteed to make the Lincoln Center cats swallow hard and take notice. At times it’s nearly straightahead, yet unlike latter-day hard bop, it is music of the here and now-with hints of jazz to come.

“If you really listen to it, I’m trying really hard not to just play time,” says Ali. It’s true. He’s playing “out” and “in” simultaneously, generating enough energy to light the East Coast. “You can hear that the drums are breaking it up a lot,” he says. “It’s not like I’m playing really straightahead drums. It might sound like that on the surface, but underneath you’ll hear a lot of stuff that says I’m really an avant-garde player,” albeit one who studied with Art Blakey and Philly Joe and therefore knows modern jazz in all its manifestations.

With his quintet, the 71-year-old free-jazz vet puts to shame drummers half his age-incessantly driving and creating, sidestepping clichés at every turn. And Ali hasn’t forsaken freedom, not by a long stretch. Even when playing straightahead, there are times in midperformance when an abandonment of form and structure is the logical next step. Less intrepid musicians skid to a stop, jam into reverse and head home. Ali and his band make the leap without hesitation. Theirs is jazz without borders, an example of what a group can do if they’ve the will and discipline to embrace a full range of possibilities.

“It does have that kind of catchy thing, where anybody can listen to this music and appreciate it-avant-garde people, straightahead people, whatever,” says Ali, “They can all hear something in there. I’m glad it works that way, because that’s the kinda stuff I want to be doing right now.”

Ali talks about his band like a proud papa, and for good reason. “I’m playing with kids who are damn near young enough to be my grandkids!” he laughs. The group-trumpeter Jumaane Smith, tenor saxophonist Lawrence Clark, pianist Greg Murphy, bassist Joris Teepe-has been together for almost four years.

The Ali-Murphy alliance dates back almost two decades. “Greg’s been in just about every band I’ve had since we met in the ’80s,” Ali says. “Jumaane I just met by chance. I’ve been knowing him since he was about 19. He’s 25 now. He first saw me when I played a concert with the New Art Quartet in his hometown of Seattle. Then he came out here to attend the New School and Julliard. I met him when he was at the New School.”

Ali first heard Clark playing at Cleopatra’s Needle on upper Broadway. “When Frank Lowe passed, I was really looking hard for a saxophone player,” says Ali. “I invited Lawrence to come down and check us out. He’s a dynamite young player, playing a lot more stuff now than he ever has. And I’d met Joris through Frank Lowe.” They’re all as comfortable playing changes as they are playing free. “When you play with me, you better be able to do it all,” Ali says.

Repertoire is one of the band’s strengths. All the sidemen write. “I do most of the arrangements and pick most of the tunes,” says Ali. “I haven’t written for the band as of yet, but we’re playing a lot of stuff by the guys. Jumaane’s written a lot of the stuff, and Lawrence is writing a lot, and so is Joris and so is Greg. We’re playing a lot of original music.” All that might go for naught if no one heard it. Fortunately, the band’s getting gigs. “We just got back from London, a week or two ago. We got really good reviews over there,” says Ali. “People seem to dig it. I’m having very good feedback from just about everybody.”

The quintet is his main focus, but Ali keeps irons in other fires, as well. “I’m doing a duo record with Borah Bergman for Soul Note or Black Saint. I played this last Vision festival with Borah, William Parker and Louis Belogenis. That was pretty cool.” Another project is By Any Means, his trio with bassist Parker and saxophonist Charles Gayle. The band recorded the critically acclaimed album Touchin’ on Trane in the early ’90s, but until recently had not performed together in almost a decade. “We’ve just started getting back together. We played the Vision Festival,” Ali says. “We’re a heavy avant-garde band, because we don’t play any melodies at all, it’s all improvised. We just start and stop. We haven’t been into the studio yet, but we plan to this year.”

Between the quintet and his other projects, Ali’s working more than ever. While he’ll always be known for his time with Coltrane, the world’s getting hip to the nearly four-decades-worth of beautiful music he’s made since. “I think it’s the longevity. I’ve been here long enough for people to think, ‘Hey man, maybe this cat really do have something!'” he laughs. “It’s just all coming together. In a way, it’s a drag, that now that I’ve become a super-senior-citizen that I got to do all this traveling now, but it’s cool, because I’m in shape and ready-and-willing to play. I wish I could’ve been doing this when I was 35, but that’s alright. It’s just an awesome experience for me right now. I’m really having fun with this stuff.

“I couldn’t ask for anything more, except maybe more money and recognition,” he continues, “but that doesn’t really matter to me; what matters mostly is the music, and I’m definitely in pursuance of the music. I feel really good about what’s happened to me. I mean, I’ve been able to have a wife and a couple of kids, and send my kids to college. I was able to own my own place. I’m pretty stable and secure, like a senior citizen should be. The only thing I ever did in my whole life is play drums, man. I never had another job. I played drums my whole life, and that’s, like, a miracle.”