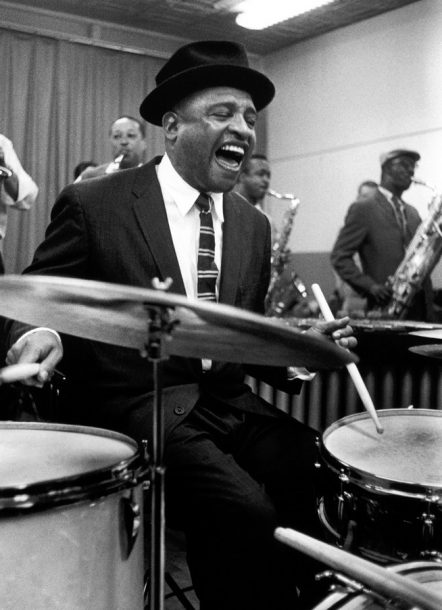 During the 1950s, renowned photographer Jerry Dantzic captured the essence of New York: the musicians, showgirls, boxers and the habitués of Coney Island, Chinatown, Broadway and other neighborhoods, as well as the city’s glamour.

On April 30, 1958, Dantzic photographed one of the few studio sessions between jazz greats Louis Armstrong and Lionel Hampton. The duo was part of an elite group of jazz musicians who were rehearsing for the Timex Jazz All-Star Jazz Show at the CBS Studios in New York City.

Opening today, April 23, at the Ogden Museum of Southern Art/University of New Orleans, “Timex All-Star Jazz Show 1958: Photographs by Jerry Dantzic” showcases more than 30 photographs, as well as a video of the TV show and other materials related to it.

“This exhibition highlights yet another facet of the career of Louis Armstrong, this time in partnership with Kentucky native Lionel Hampton,” says Ogden’s Chief Curator David Houston. The exhibition will be on view until July 19.

This Timex All-Star Jazz Show was the second All-Star Jazz show to have been produced. The April 30 show was hosted by Garry Moore and featured Louis Armstrong and His All Stars, Jack Teagarden, Gene Krupa, Lionel Hampton and His Orchestra, the Dukes of Dixieland, Gerry Mulligan, Erroll Garner and Jaye P. Morgan. The telecast was broadcast live, from 10 p.m. to 11 p.m, Eastern Standard Time. Songs that were performed included “The Lady is a Tramp,” “St. Louis Blues,” “My Baby Just Cares For Me,” “Basin Street Blues” and “Jeepers Creepers.”

“Dantzic’s classic photographs capture the exhilaration of the music and the sheer delight of these musicians to be in one another’s company,” says Houston.