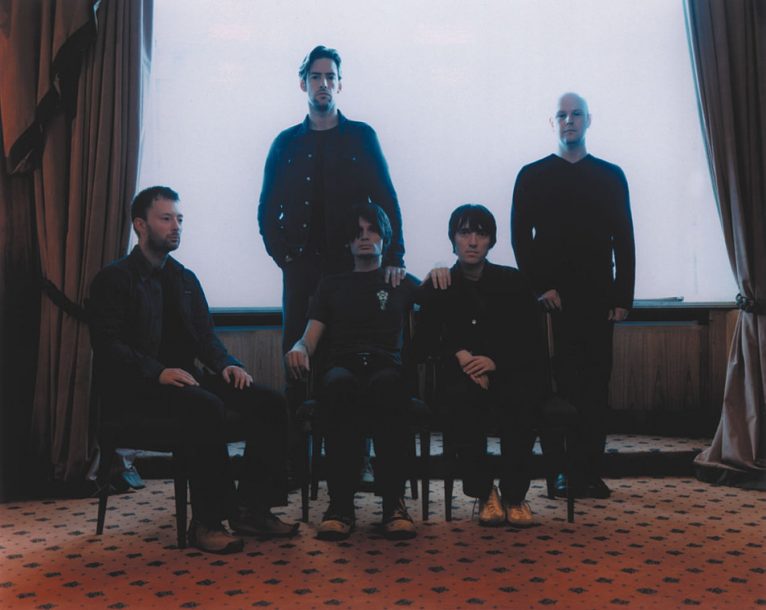 Music fans around the world have tuned into Radiohead, the most daring and successful cutting-edge band in modern rock. But few are aware that this Grammy Award-winning English quintet draws much of its creative inspiration from jazz in general, and the epic music of Miles Davis, Charles Mingus and John and Alice Coltrane and the Art Ensemble of Chicago.

“That’s very accurate, and it’s something we’ve always done,” says Jonny Greenwood, Radiohead’s lead guitarist and principal arranger and sonic manipulator. Just how much of an impact jazz has had on Radiohead was first demonstrated, albeit somewhat covertly, on the band’s third album, 1997’s landmark OK Computer.

While many fans and critics hailed OK Computer as alternative rock’s answer to Pink Floyd’s 1973 opus, Dark Side of the Moon, Greenwood is quick to cite Davis’ 1969 proto-fusion classic, Bitches Brew, as the main artistic template for OK Computer. “We love all the atmosphere and chaos on Bitches Brew-the fat, dirty sound of two electric pianos and the [multiple] drummers,” Greenwood says, speaking from London. “That’s why Bitches Brew is so good, beyond just Miles’ trumpet playing. We love how he got together that sense of chaos.”

The impact of jazz on Radiohead is demonstrated more overtly on the group’s two most recent albums, last year’s envelope-pushing Kid A and this year’s equally edgy Amnesiac. Both are works that find the band dramatically reinventing itself. Accordingly, both albums abandon conventional instrumentation-and song structures-in favor of a radically deconstructed approach to composition and performance. The result is demanding, deliberately oblique music that richly rewards attentive listening. Not coincidentally, some of the most memorable selections on both albums take their conceptual cues from jazz.

“The National Anthem,” a standout track from Kid A, features an eight-man brass section performing a freewheeling arrangement by Greenwood that would sound right at home on an album by the World Saxophone Quartet or Ray Anderson (in his Slickaphonics phase). The song was inspired by “Theme de Yo-Yo,” a cut from the Art Ensemble of Chicago’s seminal 1970 album, Les Stances à Sophie.

Then there’s the ominous “Pyramid Song,” from Amnesiac which entered the English pop single charts at number five. Anchored by a near-swing beat, it was directly modeled on “Freedom,” a composition from the posthumously released 1990 Charles Mingus album, Epitaph. According to Thom Yorke, Radiohead’s singer and creative linchpin, the first version of “Pyramid Song” even sampled the handclaps featured on “Freedom.”

“You and Whose Army?” pays homage to the jazzy vocal style of the Ink Spots, as heard through a high-tech blender, while Amnesiac’s leadoff track, the curiously spelled “Packt Like Sardines in a Crushd Tin Box,” builds on some of the same Southeastern Asian music traditions that influenced John Coltrane in his final years.

“My brother [Radiohead bassist Colin Greenwood] says it’s about ambition over ability,” says Jonny Greenwood, elaborating on his band’s jazzy proclivities. “We bring in our favorite jazz albums, and say: We want to do this. And we enjoy the sound of our failing!

“That’s what we do, and that’s what bands have always done, since the late ’50s-a bunch of guys in England listening to American blues records and copying them. In our case, it’s jazz.”

Radiohead’s affinity for jazz is so great, Greenwood notes, that the band often plays its own works-in-progress simultaneously with the group’s favorite jazz albums, in order to hear how they compare. “Colin will come in with a Coltrane album, and say: ‘Isn’t this amazing?’ And he’ll play it alongside what we’ve recorded. For ‘Dollars & Cents’ he brought an Alice Coltrane with strings album into the studio” Greenwood recalls. “He played it alongside what we’d recorded. And we kept turning down what we’d done, and kept turning up the Coltrane album, until that was all you could hear. We wanted strings and harps, but we didn’t have a harp and I don’t play double bass.

“So I had to put electrical tape strips where the notes I needed to play are. It was a rough attempt to copy what Coltrane did on her Journey in Satchidananda and Ptah, the El Daoud albums. There’s something great about aiming to get the same effect on our songs.”

Radiohead’s members readily acknowledge the influence of the Pixies, R.E.M., Aphex Twin, Autechre and other forward-looking rock and electronic artists. But the Oxford-based band, which also includes rhythm guitarist Ed O’Brien and drummer Phil Selway, is unanimous in its admiration for Miles Davis, both pre- and post-Bitches Brew.

The tempestuous jazz icon profoundly affected Radiohead, both with his constant stylistic explorations and his outspoken disdain for convention. Davis’ take-no-prisoners attitude, like his unwavering refusal to pander to expectations, was similarly influential on Greenwood and his band mates.

“Discussing Miles makes you feel like a dimestore novelist talking about Shakespeare,” Greenwood says. “We feel uncomfortable talking about Miles as any kind of influence, because what he did is so much greater and different than anything we do. We’ve taken and stolen from him shamelessly, not just musically, but in terms of his attitude of moving things forward.”