Skip to content
Become a member and get exclusive access to articles, live sessions and more!
Start Your Free Trial
Home > JT Archives > Rack ’em Up 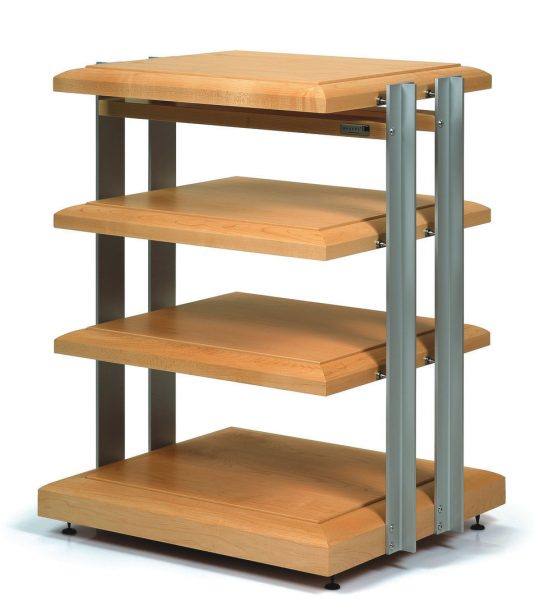 Many owners of perfectly fine, even exceptional, audio gear neglect one important aspect of setting up their systems: where and how the equipment is mounted. Stereo equipment can be very prone to distortion from outside vibration and resonance, the bouncing turntable being perhaps the most obvious and extreme example. We hopefully learned early on that, by placing the Garrard or Linn on a wall-mounted shelf, we could eliminate most of that nasty interference from less-than-solid flooring.

The fact is that, according to most high-performance audio experts, all our equipment is affected by outside vibrations to some degree, so the sale of specialized equipment racks has become big business in this segment of the home-entertainment market. Dedicated speaker stands make notable improvements to a small monitor speaker’s ability to re-create believable holographic images of musicians performing in a real acoustic space, and they allow for proper placement of the speaker away from rear and side walls, further enhancing the speaker’s ability to sound its best.

But even CD players, amps and preamps can suffer from external interference-particularly tube gear, which is especially prone to this unfortunate happenstance of nature.

There have been many solutions proposed to solve this problem, ranging from creating massively heavy equipment racks to placing turntables on surfaces that rest on what is essentially an air-filled inner tube, all intended to control those evil resonances and cure the bouncies.

One of the most well-thought-out rack systems comes from Germany’s Finite-Elemente (www.finite-elemente.de), whose principal designers, Luís Fernandes and Bernd Brockhoff, recently spoke to me about the ideas behind the top-of-the-line racks in the company’s Pagode Master Reference series. I have been using one of these for the past several months and can attest to its effectiveness, particularly with my otherwise persnickety turntable, but also helping to create a more focused and more dynamic sound overall.

These guys have researched the effects of outside vibration on audio components extensively and decided that the best solution is to “control resonance using materials that will create an environment that is very resonance-poor,” according to Fernandes. “We utilize Canadian maple in our shelf frames and shelves because this wood’s cell structure is more dense and provides better damping than other woods, helping to cut down resonance that would otherwise affect the component on the shelf,” explains Fernandes. “We suspend these on an aluminum structure employing minimal contact points. We use aluminum because it is more damping than steel. The result is a more open sound with more energy-we feel it is a more natural sound.”

Fernandes goes on to describe how the Pagode’s revolutionary “resonator” technology takes these racks to another level of resonance control. The resonators are small metal rods in the support structure of each shelf that capture and burn off outside vibrations as heat; several in each support are individually tuned to one of the sonically harmful resonant frequencies of the shelf. “These can convert up to 90 percent of unwanted kinetic energy into heat,” Fernandes says. Lab tests showed Fernandes and Brockhoff the efficacy of this unique, innovative solution to vibration control. “There was an amazing reduction of unwanted resonance when we installed the resonators,” Fernandes says.

The Pagode racks are not inexpensive, but when you consider some folks invest tens of thousands of dollars in equipment, it is worth taking the additional measures of providing a good, solid foundation to the system in order to guarantee maximum performance. They are available in a number of configurations, each one an attractive addition to any living room. In addition, they offer a wall-mounted shelf unit to better harness that age-old turntable bounce.

“We don’t consider these to be accessories,” Fernandes says. “If we did, we wouldn’t have put so much time and effort into developing these products. We view the racks as components of a system, and it’s the system as a whole that makes the music.”