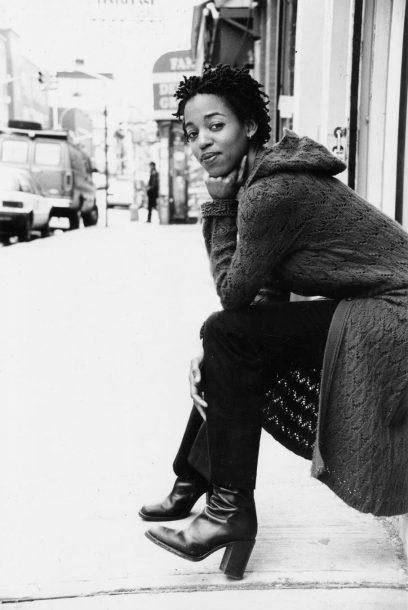 It must be in the genes. How else can you explain Sweet Home: The Music of Robert Johnson (Random Chance), the adventurous debut from singer-songwriter Pyeng Threadgill? The daughter of jazz explorer Henry Threadgill and Christina Jones, the celebrated dance choreographer and founding member of the Urban Bush Women, Threadgill unearths the sultriness, melancholy and ebullience of Johnson’s Delta blues and remodels his music for the 21st century.

Like her father, Threadgill has an ear of experimental instrumentation. Rick Congress, owner of Random Chance, heard Threadgill and cellist Dana Leong perform at a mutual friend’s birthday party, and soon after he approached the singer about doing the project. “He originally just wanted me to do just cello and voice,” Threadgill says. “But I wanted to use all kinds of different instrumentations.” On Sweet Home, she uses acoustic guitars, naturally, but she peppers the soundscapes with cello, trumpet, trombones and subtle electronic embellishments.

Threadgill also shares her father’s gift for recontexualization as demonstrated by her reggae-flavored take on “Love in Vain Blues” or the boom-bap bounce that propels “Phonograph Blues.” Elsewhere, Threadgill infuses elements of jazz, funk, R&B and Afro-Cuban music into Johnson’s blues. “I wanted each song to be different,” she says. “Otherwise what would be the point?”

Still, Threadgill insists that her mother’s work with the Urban Bush Women had a more explicit influence than her father’s music. The intoxicating “Last Fair Deal Gone Down,” which employs a staccato, syncopated rhythm derived from an 18th-century African-American ring-shout, came directly from observing the Urban Bush Women. “I wouldn’t even know what a ring-shout was had it not been for them,” Threadgill says. Traditionally, broomsticks produced the ring-shout’s defining rhythm, but Threadgill’s arrangement uses percussion, guitar and handclaps-plus a little something extra. Although she initially wanted to use the same broomstick-derived beats for this recording, Threadgill couldn’t produce the correct sound. “Eventually, we used a ladder,” she laughs. “That’s me, banging the ladder on the floor to generate the rhythm.” Now, how Threadgill-ish is that?