Skip to content
Become a member and get exclusive access to articles, live sessions and more!
Start Your Free Trial
Home > JT Archives > Praise from the Rock: Rockers on Jazz 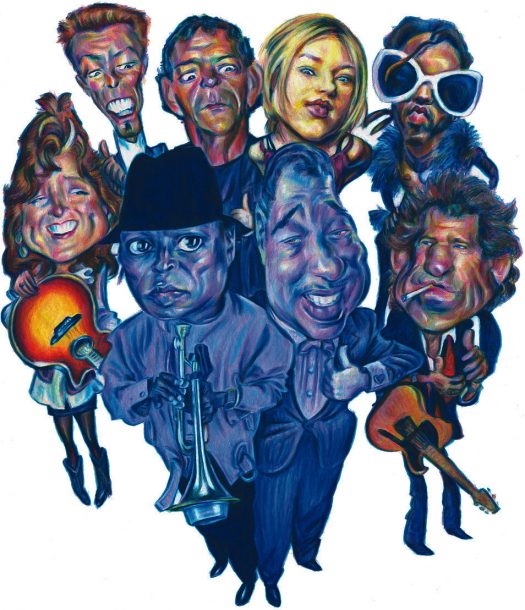 Ask an average rock ‘n’ roll fan about jazz-mainstream, progressive or otherwise-and you may receive a blank stare or a mumbled reference to Kenny G … END_OF_DOCUMENT_TOKEN_TO_BE_REPLACED

Ask an average rock ‘n’ roll fan about jazz-mainstream, progressive or otherwise-and you may receive a blank stare or a mumbled reference to Kenny G or David Sanborn. But ask the same question of many performers those same rock fans idolize, and you will get a very different response.

Indeed, jazz is a music of choice for an unusually broad array of rock, pop and hip-hop artists-even if their own work seldom reveals a trace of jazz. And many of these performers jump at the opportunity to give props to the jazz greats they admire.

“I love Gerry Mulligan and Chet Baker,” says veteran rock vocalist Rod Stewart, who names Al Jolson as his all-time favorite singer. “Did you ever see the movie Jazz on a Summer’s Day? I’d really like to get a copy of that.

Stewart has yet to record an album of classic jazz songs and torch ballads. But Linda Rondstadt, Carly Simon, Sinead O’Connor and former Roxy Music singer Bryan Ferry all have. And the list of pop stars with jazzy inclinations is a constantly growing one.

I’d love to do an album of jazz standards,” admits folk-rock sensation Jewel, whose concerts ofter feature her Ella Fitzgerald-style version of “Too Darn Hot” by Cole Porter. “When I was attending Interlochen in Michigan, I made money by singing in a jazz bar with a trio. I never thought I’d be a folk artist or a pop artist.

Then there’s Bob Weir, whose love of jazz goes deeper than many of his pop and rock peers

The former Grateful Dead singer-guitarist, now the leader of the improvisation-happy band Ratdog, is completing a musical about African-American baseball great Satchel Paige. Weir has been working on it for several years with Grammy Award-winning bluesman Taj Mahal and jazz sax dynamo David Murray, who sometimes blew a few solos at Grateful Dead concerts.

“In our writing, Dave, Taj and I are trying to quote a lot of old greats, like Fletcher Henderson, Duke Ellington and Louis Jordan; people from Satchel Paige’s era,” Weir said recently. “Jazz is the direction in which I’ve been drifting for the last decade or so. Ratdog is not a jazz band by any means, but we can go there.”

The love of jazz shared by many rock and pop stars was reaffirmed at the 1999 American Music Awards in Los Angeles. Although the live awards telecast failed to feature even a single jazz category or artist, it provided a timely opportunity to ask a wide array of musicians backstage to comment on the legacy of Duke Ellington, whose centennial was then barely three months away.

With only one exception, each performer enthusiastically and knowledgeably sang Duke’s praises. My respondents ranged from rap star Coolio and Ally McBeal TV songstress Vonda Shephard to Billy Joel, Everclear rock band leader Art Alexakis and longtime jazz fan Elvis Costello (who cited Ellington’s “Money Jungle” album as a personal favorite). The only performer who declined to offer an opinion on Ellington when asked was country-pop superstar Garth Brooks. “I wouldn’t be intelligent enough to say anything about him,” Brooks demurred. “I’m sorry, I’m not that intelligent when it comes to the real stuff.”

Happily, many other rock and pop musicians are. Their comments, which have been gleaned from interviews I conducted in 1999 and previous years, make it clear you don’t have to play jazz to have a passion for it.

“I’m a really big jazz fan, although I resolutely do not play jazz. I had a teacher when I was 15, and we’d listen to Barry White albums and big band albums. Then I went to a record store, and this guy gave me some fusion records. I listened to them, and I said: ‘I don’t get that.’

“Then I got [Miles Davis’s] In A Silent Way, and it was great. And then I got [John Coltrane’s] A Love Supreme. I was 16. The four minutes after the bass solo on A Love Supreme is my favorite music, ever. I listen to free jazz-Eric Dolphy, Albert Ayler, and some Pharoah Sanders and Sun Ra. That’s what I think jazz is.”