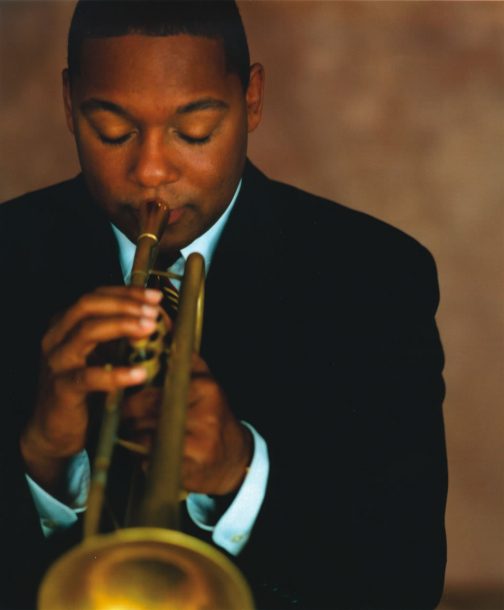 It’s the kind of program that just begs to be shot down by cynical, beard-stroking intellectuals like me-the ultimate expression of Jazz at Lincoln Center’s “older is better” ethos. Even the title invites scorn: “Wynton and Louis Armstrong’s Hot Fives.”

At best, it’s rhetorically clumsy. At worst, it’s gallingly presumptuous on the part of the co-headliner, the institution’s artistic director, Wynton Marsalis. Hubris and Marsalis. The two words almost rhyme. I braced myself for the sonic equivalent of a visit to Madame Tussauds.

Joining the trumpeter was a band of accomplished retro-jazzers: Walter Blanding on tenor and soprano saxes; Victor Goines on clarinet; Vincent Gardner on trombone; Jonathon Batiste on piano; Wycliffe Gordon on tuba, trombone, bass and vocals; Don Vappie on banjo and guitar; Carlos Henriquez on bass; and Ali Jackson on drums.

In the beginning, there was lethargy-perhaps because this was the last of three consecutive nights they’d presented this material. More likely, it was the fussiness engendered by Marsalis’ overweening leadership. In any case, the first few tunes (“12th Street Blues,” “Potato Head Blues” and “Jazz Lips” among them) fell flat. Things were tight, certainly. Attacks and releases were immaculate, blends were perfect. Dynamic contrasts were studiously observed and painstakingly executed. Nothing was left to chance. The music was wrung dry of spontaneity. Any resemblance to Armstrong was purely incidental.

Things eventually loosened up somewhat. The best moments were, not surprisingly, the down-and-dirtiest. Don Vappie’s herky-jerky banjo work jolted me awake more than once. Vincent Gardner’s solos impressed. More than the others, he was able to transcend orthodoxy and express something personal. Technically, Victor Goines was remarkable-pure-toned, quick-fingered and blithely articulate. He hasn’t much in the way of a distinctive style, although his gritty solo on “St. James Infirmary” was one of the evening’s best.

The leader had his moments. Marsalis gets bashed for not possessing a truly unique voice, but he has other redeeming qualities. His mastery of the trumpet is complete, and his senses of swing and time are equal to any contemporary jazz musician. His ebullient solos on “Once in a While” and the closing “Fireworks” evidenced a powerful drive and rhythmic invention. His abject devotion to all that’s come before gives his work a generic quality. Nevertheless, he cut a figure as perhaps the world’s greatest composite trumpet player-a living synthesis of jazz styles, 1910-1960. There are worse things to be, surely.

The music worked as an homage or a revival. On a deeper level, however, it lacked. The ground covered was too familiar, the treatment clichéd and overly reverential. The wild and wooly spirit of discovery that speaks to us from the original Hot Five recordings was nowhere to be found. Therein resides the central point: That very air of adventure, that ineffable spark of inspiration provides the essence of what makes the best jazz great. It’s what separates the original Hot Fives from a skillfully executed, well-meaning tribute. I wish Marsalis had made that point. Unfortunately, I’m not sure he understands it himself.