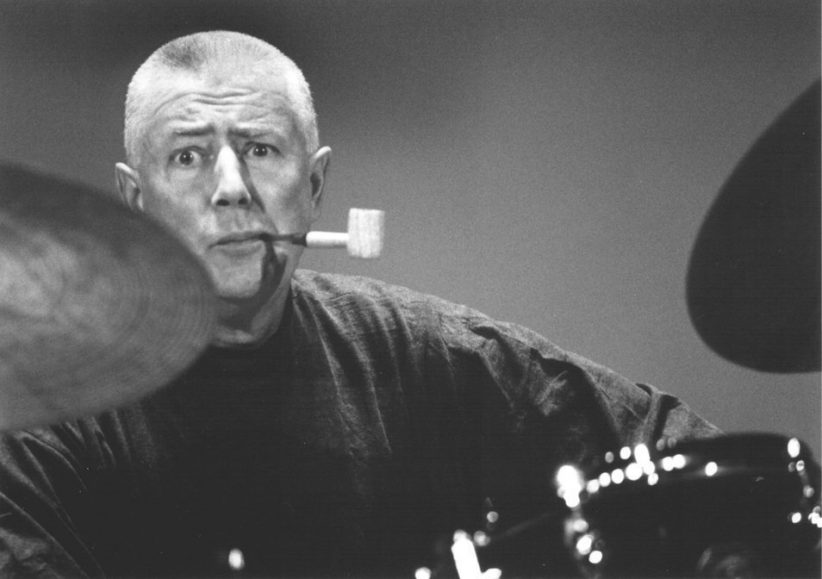 Having been a fan of both 65-year-old Brotzmann and 64-year-old Bennink for years-I’d seen Brotzmann quite a few times with Die Like a Dog and with his own Tentet, and Bennink once with the ICP Orchestra-I was especially thrilled to see them together for the first time, in a stripped-down format, two master musicians with extensive histories of innovation and collaboration. That this concert occurred at Baltimore’s An Die Musik-the avant-classical music store and performance space (recently voted as having the “best chairs” in Baltimore)-was an added bonus. Incredibly, the room wasn’t sold out, but it was close to full and the anticipation was palpable: It seemed everyone else was waiting to hear something new, different and otherworldly.

After a 20-minute wait, the pair finally sauntered onstage, Bennink wearing a powder-blue shirt and a red bandanna, like some Kung Fu warrior ready for battle, Brotzmann in a plain, workmanlike black jacket. Without any fanfare, the Dutch drummer, with manic energy, launched into the first piece, all four limbs coaxing polyrhythms from the vintage red four-piece kit. After a minute or so of continuous snare and tom rolls, Brotzmann, clarinet in hand, joined the percussive barrage squealing and screeching in the high register. Bennink countered by shifting into marching beats, albeit abstractly, and the duo exchanged this dialogue for roughly four minutes, grabbing the audience’s attention with nonstop intensity and activity, before gradually toning down into a quieter, introspective passage. Brotzmann changed course and opted for an Eastern feel with modal soloing. Bennink eventually left his drum seat and walked to the front of the stage, sticks clattering, only to start a swinging pattern on the wooden floor, his left foot tapping out the rhythm, punctuating the floor beat with bass drum thuds. They ended the introductory piece in this fashion, ten minutes of constant motion and fluidity and ideas.

The burly, bearded German picked up his tenor sax for the second piece, which the pair started in unison, Brotzmann exhibiting a gruff, full-bodied tone as Bennink worked out a stuttering pattern on the hi-hat before moving on to some stellar brushwork all over the kit. Their dynamics were great, if a bit controlled and not too extreme, building up from subdued sax honking and brushing into an intense lyrical climax that never crossed the line into explosive wild abandon. Bennink then took his first solo, using his leg and foot to muffle the snare and rack tom, one of his well-known tricks designed to expand the palette of percussive possibilities. Like an action painter, Bennink proceeded to assault the kit, clattering and pounding and scraping the heads in an impressive torrent of sound, gradually morphing into a tribal Africanesque rhythm which goaded Brotzmann into well-constructed jabs of tenor bellowing, culminating in a jarring halt.

Bennink utilized more extended techniques to begin the third and shortest piece, rubbing his drumsticks together as he applied pressure to the floor tom, creating a sort of howling effect. Brotzmann decided to go with the sopranino sax and kept the mood mellow and pensive. The piece never crescendoed, but remained compelling as both musicians used space and extended techniques to create subtle sounds that bounced around the room like a chorus of mutant fowl. As the audience clapped, Bennink lifted his snare, picked up his brushes and sat on the piano bench, while Brotzmann returned to the tenor. After 40 minutes of unpredictable and eye-opening approaches, I still couldn’t guess what he’d do next: a bent variation of “Whistle While You Work,” replete with whistling, tapping feet and snare brushing. As Brotzmann aped the melody, Bennink stopped, leaving Brotzmann unaccompanied so he could take a solo. The improvisation-and set-concluded in another climactic maelstrom of density and propulsion, Brotzmann braying with the power of a brass army and Bennink flailing around the drums as if he had eight arms instead of two.

Trying not to sound too heavy-handed, I have to admit that witnessing these two veterans, with over 40 years each of recording and performing under their belts-Brotzmann debuted in 1967 with For Adolph Sax and Bennink with Tony Vos’ Trio in 1963-was truly inspirational and emotionally fulfilling. Even though I would have loved to stay for the second set, I knew the reverberations of Brotzmann’s reeds and Bennink’s drums would echo through my brain long enough for the set to assume extraordinary longevity. Considering the challenging methods they use and their dismissal of anything resembling conventional melody, this was a feat in itself.