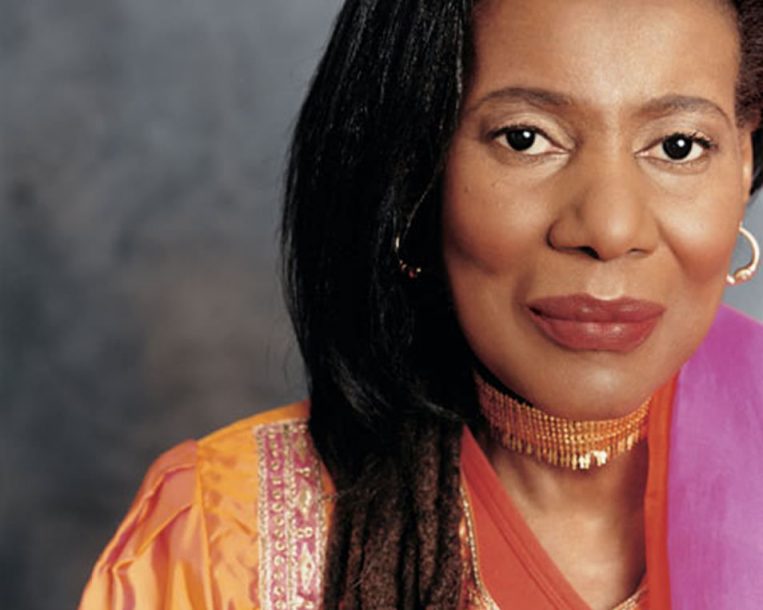 When the curtain came up at magnificent Prudential Hall in the new NJPAC facility in Newark, there was a collective gasp at the sight of a dozen or more empty chairs stage left and a bevy of microphones set up stage right. Clearly, this was to be much more than had been advertised-the Alice Coltrane Quartet in concert. But the surprise wouldn’t be revealed until after intermission.

During the first half of this rare event-the first time in 20 years that the spiritual-seeking Alice (aka Swamini) had emerged from her ashram in Agoura Hills, Calif. to lead her own group-she did indeed perform with a quartet that included Jack DeJohnette on drums, Drew Gress on bass filling in for an ailing Charlie Haden and her son Ravi on tenor and soprano saxophones. The second half of the concert featured the world premiere of material from her upcoming CD Sacred Language of Ascension, a project done in collaboration with Dr. J.J. Hurtak, a worldwide lecturer and expert in Hebrew mysticism. For this ambitious undertaking, the quartet was augmented by 18 string players from around the New York area and a 16-voice choir imported for this special occasion from Alice’s ashram. The impact of the expanded ensemble, when combined with a video presentation on a large screen that hovered overhead, was profoundly soul stirring.

This spectacular multi-media event promoting peace, harmony and unity came in what would’ve been John Coltrane’s 80th year (he was born in Hamlet, N.C. on Sept. 23, 1926). And while Alice has performed in New York in recent years as a special guest with Ravi’s group at the 1998 Texaco Jazz Festival at Town Hall and again last year at Ravi’s gig at Joe’s Pub, this concert was clearly a product of her own divine inspiration, providing a place where Hindu songs of worship mingle with congregational church music and avant-garde music.

Following lengthy and glowing introductions from Baraka Sele, programmer for NJPAC’s Alternate Routes series, and Essence magazine editorial director Susan Taylor, Alice strode onto the stage dressed in an orange sari, emanating grace and serenity as she cast a beatific smile to the adoring crowd. The quartet opened with the meditative traditional Indian hymn “Sita Ram” with Ravi playing tambourine and DeJohnette triggering dumbek samples on his digital drum pad. On top of this tuneful tamboura-fueled drone, Alice layered on free-flowing, right-hand statements on her Wurlitzer organ, which was draped in sky-blue satin cloaks and bedecked with white tulle. While Alice is remembered for her cascading, arpeggiated piano lines with the latter-day John Coltrane groups and for her groundbreaking work on harp, her contributions on organ are often overlooked. In that regard, she should be considered an innovator along the lines of the late Larry Young, another truly inspired player who took the organ to other realms beyond the traditional greasy, blues-‘n’-bop mode generally associated with the instrument. In her hands, the Wurlitzer organ becomes a tool for rejoicing in a spiritual sense, and its distinctive, shenai-like quality is particularly well suited for East Indian-flavored material like “Sita Ram,” which, as Alice informed the audience, was Mahatma Gandhi’s favorite hymn. Ravi’s soprano sax solo here was flowing with power and conviction and full of melodic ideas. Mother beamed with pride as her son dug in and blew with intensity, pushed by DeJohnette’s polyrhythmic whirlwind on the kit.

Alice switched to piano for “Translinear Light,” the title track from her Verve album of two years ago. For this melancholy, minor-key ballad, with its allusions to Trane’s “After the Rain,” DeJohnette started off with mallets as Gress bowed a deep-toned ostinato underneath. Alice offered assertive left-hand statements and glistening right-hand filigrees while dropping in the occasional blues or bop phrase in the midst of her searching solo. And she comped forcefully behind her son, whose bold, probing tenor playing on this deep number conjured up memories of his venerated father. Like the opener, this piece also made a transition midway through from minor to major; Alice’s aural equivalent of always seeking the light.

On the serene, prayer-like Coltrane original “Jagadishwar,” Alice blended subtle synth-string washes behind her piano tones on a Korg Triton. Again, there was a poignant shift from minor to major and the intensity of the piece picked up as DeJohnette beared down on the kit with some explosive drumming. Ravi responded with powerful upper-register blasts on tenor before the piece resolved to a gentle whisper.

For a faithful rendition of John Coltrane’s “Africa” from Africa/Brass, the quartet was joined by special guest bassist Reggie Workman, who had originally played on that 1961 Impulse! session. The deep groove created by the two-bass tandem of Workman and Gress created a solid underpinning for some potent playing by the group. Alice’s forceful left hand underscored the proceedings while her percussive right-hand stabs played against the groove like a timbales player in a salsa band. DeJohnette unleashed a show-stopping solo here, traversing the kit with a combination of Elvin Jones’ polyrhythmic rolling thunder and Tony Williams’ muscular, crisply orchestrated attack. His cleanly articulated fills on the toms and crafty use of time displacement climaxed this heightened set-closer. Workman also offered a stunning bass solo in which he nimbly switched from animated arco work to dazzling pizzicato playing before engaging in a spirited bass dialogue with Gress.

Following a brief intermission, the full-blown ensemble was assembled for what Dr. J.J. Hurtak described as, “the ashram goes public.” Offering messages of hope, harmony and unity, they opened with an uplifting theme entitled “Mata” (Divine Mother), which incorporated recitations of divine utterances in Sanskrit, Aramaic, Hindu, Hebrew and English. In his introductory remarks, Hurtak interpreted one verse of the song as: “All nations arise to proclaim the glory of God in all His sacred names. Through this music let us all be peacemakers.” Draped in white robes, the 16 members of the Sai Anantam Ashram Singers chanted and sang with the unbridled gusto of a Hare Krishna ceremony while the strings conjured up swirling, Stravinsky-esque harmonies behind them. DeJohnette’s relentless polyrhythmic abandon on the kit elevated the proceedings to a stirring crescendo.

Their second piece, “Universe,” was the real mind-blower of the set. A profoundly moving work that followed the evening’s theme of moving from dark into light, it worked as the soundtrack to the video projected on the huge screen hovering over the orchestra. Beginning with a sequence of horrific images depicting man’s inhumanity to man-from war, torture, assassination and abuse of civil rights protesters in Alabama during the mid-’60s to graphic images of the planes plunging into the twin towers on 9/11-the video eventually shifted focus to icons of nonviolence and peace (Mahatma Gandhi, Dr. Martin Luther King, Nelson Mandela, the Dali Lama, Hindu saint Satya Sai Baba) along with scenes of worship and spiritual rejoicing from cultures all over the world. The whole multi-media presentation was Alice’s way of offering hope while promulgating ideas of global unity. As she states on her Web site alicecoltrane.org: “Truly we are all one family of humanity that is greatly in need of messages of peace, harmony and unity. Therefore, all people should endeavor to appreciate others’ cultures and religions with a sincere effort to obtain peace and not war.”

The quintet (with Workman) followed this stirring segment with a rendition of Trane’s “Acknowledgment, Part 1” from A Love Supreme; a perfect segue from Alice’s spiritual anthem. DeJohnette’s energy, endurance and flurry of ideas on the kit here were remarkable, highlighted by an intense, pyrotechnic drums-sax breakdown with Ravi to put an exclamation point on the proceedings.

Following this gala appearance in Newark, Alice was scheduled to perform with the quartet in San Francisco (with Roy Haynes subbing for DeJohnette) and also in Ann Arbor, near her hometown of Detroit. There were no other planned performances on this rare mini-tour. So if you missed Swamini in concert, you’ll have to catch her back at the ashram.