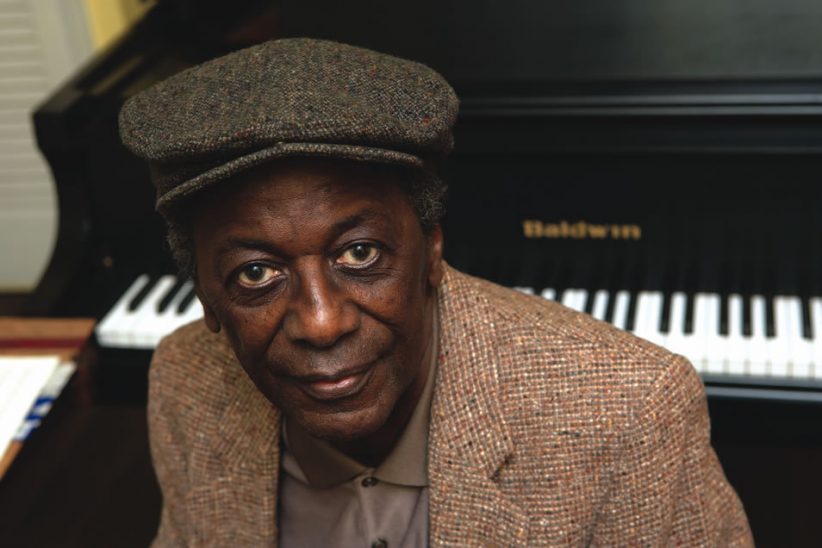 This world premiere of music from Passing Ships, Hill’s 1969 Blue Note recording which was shelved for decades and issued for the first time in 2003, was made all the more meaningful in view of the composer’s recent bout with lung cancer. Given the severity of his illness, there was a heightened sense of drama about this historic event, presented as part of Merkin Hall’s ongoing series, “Reissue: Classic Recordings Live.” And the visionary composer surpassed all expectations with music that was as provocative and captivating today as it would have been 37 years ago, had it been released.

A remarkably ambitious work for its time, Passing Ships was a precursor of the kind of writing that Hill would pursue more than 30 years later with his big band (documented on 2002’s acclaimed A Beautiful Day). Originally scored for brass quintet, a single reeds player and three-piece rhythm section, this unconventional nonet work stands as a masterpiece in Hill’s discography. And while the performance this evening would’ve benefited from a bit more rehearsal, the overall effect nonetheless galvanized an audience of longtime fans, friends, fellow musicians, critics and assorted industry types.

Hill opened the show in a trio configuration with drummer Eric McPherson and bassist John Hebert. Looking very frail but playing with a valiant spirit, the pianist layered his individualistic chordal clusters, dissonant voicings and distinctive cascading lines into the mix as McPherson and Hebert whipped up an interactive whirlwind behind him. McPherson, who follows Nasheet Waits in the drum chair and who also appears on Hill’s latest Blue Note recording, Time Lines, created a flowing polyrhythmic pulse underneath the trio that elevated the music while also commenting on it in subtle ways. His quick hands and instincts revealed a rare sensitivity and a melodic ingenuity on the kit that allowed him to react strictly in the moment to Hill’s unpredictable accents. Hebert, who follows Scott Colley in the bass chair and also appears on Time Lines, is fast becoming one of the more sought-after bassists on the scene for his deep tone, consummate accompaniment skills and outstanding solo abilities in arco and pizzicato situations. Both Hebert and McPherson inhabited Hill’s shape-shifting trio music, successfully establishing an organic hand-in-glove chemistry with the unorthodox pianist’s sparse, broken rhythms, staggered harmonies and dramatic melodicism. McPherson is equally adept at creating colors and textures with mallets, sticks and brushes on the cymbals and drums as he is at creating hip counter rhythms in between the cracks of the pianist’s sparse approach. And Hebert, who seems to combine aspects of both Charlie Haden and Dave Holland in his playing, alternates between zen-like use of space and precise counterpoint with his bass. This flexible rhythm tandem is keenly attuned to Andrew’s needs.

Hill’s approach to the piano is often quite painterly. On the canvas of his own compositions, he applies dabs of color here and there, adding bold strokes where he feels an opening and offering shards of tonal impressionism when the mood strikes. His way of elongating phrases and sustaining tones over a churning undercurrent creates the impression of suspending time altogether. Yet, there is an inherent logic to his compositions that is seamless, when all the pieces fit together properly.

With the expanded palette of the full nonet, Hill created an array of glorious colors and moods. Accompanied by J.D. Parran on reeds (reprising the role of Joe Farrell), Ron Horton and Keyon Harrold on trumpets (reprising the roles of Woody Shaw and Dizzy Reece), Mark Taylor on French horn (covering Bob Northern’s parts), Curtis Fowlkes on trombone (playing the Julian Priester role) and Howard Johnson (the only other original member from the Passing Ships session) on tuba, Hill alternately conducted the ensemble while occasionally walking over to the piano to drop in provocative voicings or contemplative stabs at the keyboard, played sparsely but forcefully on top of the fray. These newly resurrected pieces were characterized by minimalist grooves, punctuated by swirling counterpoint from the brass section and highlighted by some passionate, unbridled expression from the soloists.

Parran, a member of both Andrew’s and Cecil Taylor’s big bands, distinguished himself with a strong alto flute solo on the set opener, “Noon Tide,” and expertly straddled the hard bop-avant garde aesthetic with his swinging tenor sax solo on the angular and aptly named “Sideways.” Trumpeter Harrold also stood out as a formidable soloist, dazzling the crowd with his bristling high-register flights along with the sheer power and clarity he conveyed on “Noon Tide.” Fowlkes, a charter member of the Jazz Passengers and current member of Charlie Haden’s Liberation Orchestra, contributed an earthy plunger solo on the boogaloo flavored “Plantation Bag,” which was underscored by McPherson’s funky groove and Johnson’s bubbling bass clarinet work. McPherson created an elastic time feel underneath Clark’s fluid French horn solo here before returning to some slick Clyde Stubblefield-styled syncopation on the kit behind Johnson’s potent tuba solo. Hill’s idiosyncratic piano playing on top of that groove was halting and against the grain, with allusions to Eubie Blake and Monk along the way.

On the elegiac, darkly beautiful “Passing Ships,” McPherson switched to brushes to create the proper serene mood while Johnson and Parran united for a noirish low end on two bass clarinets. Harrold was again prominently featured here, blowing fast, bright trumpet flourishes on top with his signature bold attack on each note. The swirling harmonic movement of this dreamy, wafting set-closer seemed to suspend time and left the audience wanting more. Hill returned for a solo piano encore that was tender, incredibly lyrical and all-too-brief. Then as he slowly shuffled off stage, he stopped for a moment to wave to the adoring audience, which had risen en masse to salute this timeless music. It was both a triumphant and profoundly moving moment.