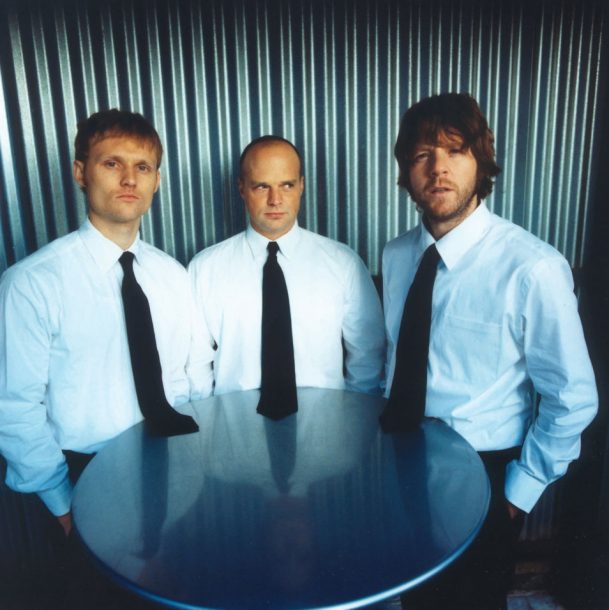 The line between jazz and rock has always been a fine one. Both are highly performance-based and both value virtuosity and showmanship, yet they tend to remain quite distinct. Medeski, Scofield, Martin and Wood’s tour-opening performance at Washington, D.C.’s Nightclub 9:30, however, made me question how comfortable I was with both musical forms.

To say that the styles are distinct is not to say that jazz and rock are incompatible; the truth is that the two blended well can result in some of the most exciting and engaging music found in either genre. Jazz-rock or “fusion” as it is dubiously known, has evoked some of the most daring and creative musicians to push musical boundaries untouched by either genre alone.

Despite the fact that the marriage between contemporary groove-jazzers Medeski, Martin and Wood and guitar giant John Scofield (or MSMW) does often not result in what many would describe as jazz-rock or fusion, their November 10 performance managed to sway precariously between feeling like an intimate jazz show and a rowdy rock concert. Regrettably, these two sentiments proved to be incompatible.

On the heels of their newly released Out Louder on MMW’s own Indirecto Records, MSMW played to a sold-out Washington crowd. Spirits were high amongst the crowd, and they were treated to a first set of all-new material. In a move that startled my delicate jazz sensibilities, Scofield let his signature Ibanez hollow-body rest in favor of a Fender Telecaster on the first set’s highlight-“Little Walter Rides Again.” The opening track from the new record and the lone Scofield composition, it most effectively captures what makes the collaboration between MMW and Scofield so special: a bouncy drum groove, a fetching Scofield melody and cheerful interplay between Medeski’s organ and Sco’s lead guitar combine to create an uplifting and infectious tune.

“In Case the World Changes Its Mind” boasted a brooding Chris Wood bass groove and Medeski stretching out on a long melodica solo. It was during the quieter moments of this tune that the crowd became restless and loud. Perhaps it was the fact that they didn’t know the new songs, or maybe many simply didn’t care about the show, but this loud trend would continue for the rest of the night. This normally wouldn’t have been a major problem, but with Medeski low in the mix at times, he was often drowned out by the sounds of conversing fans. It was during moments like this where I felt as if I was at a rock concert put on by one of the most popular jazz acts around. “Miles Ahead” paid tribute to the aggressive jazz-rock sound Miles Davis pioneered, with Scofield doing an excellent job running up and down the frets in trademark swells of emotion and release. “Hanuman” was another first-set highlight, showcasing Chris Wood’s uncanny ability to simultaneously lay back in the groove as well as be the center of attention.

In the 15-minute intermission, fans rushed to the bars while security shoved piles of marijuana-smoking kids towards the exits, and at moments it was easy to forget exactly where I was. The 9:30 Club is the biggest rock club in Washington, showcasing everyone from the loudest metal band to the softest piano songstress, but the fact of the matter is that jazz artists as celebrated as MSMW have no place there. The sound system leaves something to be desired, and the club attracts too many people interested in having a good time at a club with their friends-people who are completely disinterested in the music. A group like MSMW playing in a crowded club is problematic in itself, for when you’re surrounded by chatty fans during a stretch of improvisational ambience where John Scofield tweaks knobs on his pedals, Medeski creates swells of distorted noise on his synths and Billy Martin is deep in a maraca solo for 10 minutes, it can be impossible for even the most dedicated fan to pay attention. There are many excellent venues with seats in the D.C. area that MSMW could have chosen that would’ve been a better fit than the 9:30.

Despite the crowd’s demeanor and a first set that at times lacked energy, MSMW took the stage for a second set that brought some fans back to attention. The instantly recognizable riff of “A Go-Go,” the title track off the album of the same name, received the biggest crowd pop of the night. The second set, while shorter than the first, featured only songs from the group’s previous collaboration. “Hottentot” had an excellent groove and gave Billy Martin some time to shine, as he expertly weaved a drum solo in and out of his bandmate’s swells of sound. Of the four musicians, John Medeski seemed the most relaxed, oftentimes too much so. Perhaps with another player onboard to maintain melody, he feels comfortable enough to sit back and watch, which is something he rarely does with MMW; the intensity he’s become known for just wasn’t on display Friday night.

The evening came to a close with a cover of Peter Tosh’s “Legalize It.” Ironically, it was a reggae classic that ended a performance that tiptoed the line between jazz and rock, ultimately resting in between. These masters undoubtedly played jazz, and did so remarkably well, but something was irrevocably lost in its rock presentation, something that I hope MSMW manages to avoid in the future.