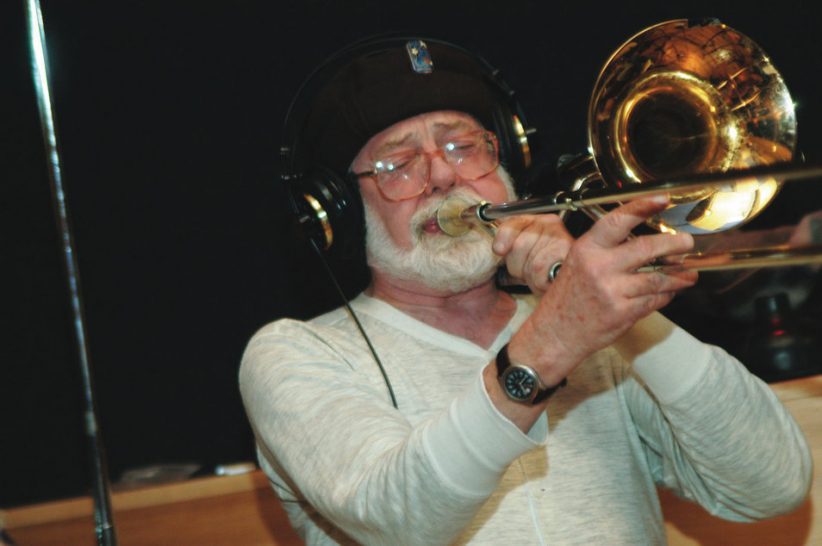 For over 40 years, exploratory trombonist Roswell Rudd (pictured) has forged a career-or perhaps more accurately, an artistic legacy-of left turns and marriages between tradition and brazen innovation. Long considered an avant-garde avatar, Rudd nonetheless continues to transcend that damnable tag by perpetually proving that ultimately, music is music and the tools are a means to a glorious end. From his cacophonous stints in Archie Shepp’s mid-’60s band and the New York Art Quartet to his fantastic, underrated solo albums; from his jazz operas “Blues for Planet Earth” and “Gold Rush” to MALIcool (a collaboration with traditional Malian musicians), Rudd’s tireless forays into the unknown have resulted in some truly stunning moments, and his current collaboration-at least in a live setting-with Badma-Khanda’s Mongolian Buryat Band did nothing to refute that history.

First, some background on Badma-Khanda and the Mongolian Buryat Band: Born into a Buryat family in Inner Mongolia, China in 1979-her grandparents defected from Communist Russia in the ’30s-Badma-Khanda grew up entrenched in the history of her ancestry (a Mongolian people numbering approximately 250,000 whose native lands are located north of the Russian-Mongolian border near Lake Baikal), learning its language and traditional folk songs. Now a superstar in Russia who is equally adept at belting catchy ethno-pop as well as interpreting the subtle nuances of ancient Buryat songs, Badma-Khanda performs all over the globe, enchanting those who’ve most likely never experienced the beauty of Buryatia.

Rounding out the rest of the Buryat Band are Batuvshin Baltanseren (bass, flute or limbe and throat singing), Urantugs Jamiyan (zither or yatag), Javkhian Erdenebal (horse head fiddle or morin kuhr) and Sayana Tabkharova (hammered ducimer or lochin). Dressed elegantly in their traditional garb, the Buryat Band began the night with a couple of instrumental pieces showcasing each musician on their respective instruments as sort of an introductory overture. The combination of flute, zither, dulcimer and fiddle proved otherworldly and ethereal, yet simultaneously seemed grounded in an earthy folk tradition. Being a complete outsider to this mysterious culture, I could pinpoint similarities to Chinese and Japanese folk melodies (obviously) and Celtic motifs (less obviously). Two of the main characteristics in Buryat music are the use of fourths (in instruments as well as compositions) and the reliance on the pentatonic scale, making it relative to Eastern Asian and Siberian folk music. Polyphony is nonexistent, as the instruments play the same melody, but with different ornamentation, timing, nuance and dynamic; the simple motifs allow them to improvise quite freely around each other, maintaining a base in which to return. It isn’t too difficult to discern a direct lineage to various global folk songs, from Eurasia to Africa. Splendid on their stringed instruments, Jamiyan and Tabkharova plucked and hammered with astonishing skill and facility while Baltanseren’s reedy flute floated gracefully above them. The Buryat Band already had succeeded in captivating the audience and establishing an alternate-yet-familiar realm of musicality.

Badma-Khanda finally ambled to the front of the stage, looking like a Buryat princess from centuries ago but sounding like a magical, celestial angel. Her vocal range and delivery-not to mention exotic appeal-were reminiscent of Bjork and Yma Sumac. Narrative structure is important in this music, with most Buryat text depicting an epic tale that the singer vividly expresses. Badma-Khanda’s mastery of this approach results in utter enthrallment: With her face glowing with the delight of love and discovery or pallid with the pain of melancholia and loss, she holds the listener enrapt and teetering on every vocal lilt. It isn’t necessary to understand its verbal language because its musical language explains everything. She sang a few emotionally disparate songs before leaving the stage, followed by the Buryat Band.

After a few seconds of silence, a bleating trombone emanated from behind the stage and Roswell Rudd sauntered front-and-center, playing an unaccompanied jubilant solo in the gutbucket Dixieland style, plunger in hand, straight from the heritage of Kid Ory. Rudd proceeded to impart his thoughts on cross-cultural communication and relations, offering optimism for world peace and understanding-the trombonist’s liberal ideas fortunately haven’t abandoned him. For the next hour, Rudd traded pentatonic melodies with the Buryat Band, most notably on “Buryat Boogie,” a marriage of classic ’50s jump blues with the atmospheric timbre of the band’s strings that, in lesser hands, would’ve appeared as contrived and cloying instead of strangely evocative. The interaction between Rudd’s growling, skittering trombone and Baltanseren’s multiphonic, guttural throat singing was exhilarating as they danced and parried around each other’s pentatonic runs; Jamiyan and Tabkharova’s improvisations colorfully sprinkled around them perfectly. Ultimately, this is where the salient connection between gutbucket blues and Mongolian ethnic folk lies: in their shared basic pentatonic language and expressive improvisation-and showmanship. Of course, we can travel farther back and claim Africa as the origin to this mélange of musical ideas, but the personal and cultural imprints of Rudd’s America and the Buryat Band’s Mongolia define the idiosyncrasies that make each tradition so special.

Overall, this unique amalgamation of cultures mostly succeeds, revealing a natural compatibility and an expansive range of improvisatory possibility. In fact, the whole concept could be perceived as a capsule of Rudd’s entire career, touching upon both his Dixieland roots and lyrically abstract tendencies. It may seem outlandish that the convergence of two completely contrasting musical styles rooted in tradition culminate in a refreshingly new and vital sound, but that’s the beauty of folksong and the universal musical language: that given the proper treatment, ancient forms transmogrify into virgin experiences.