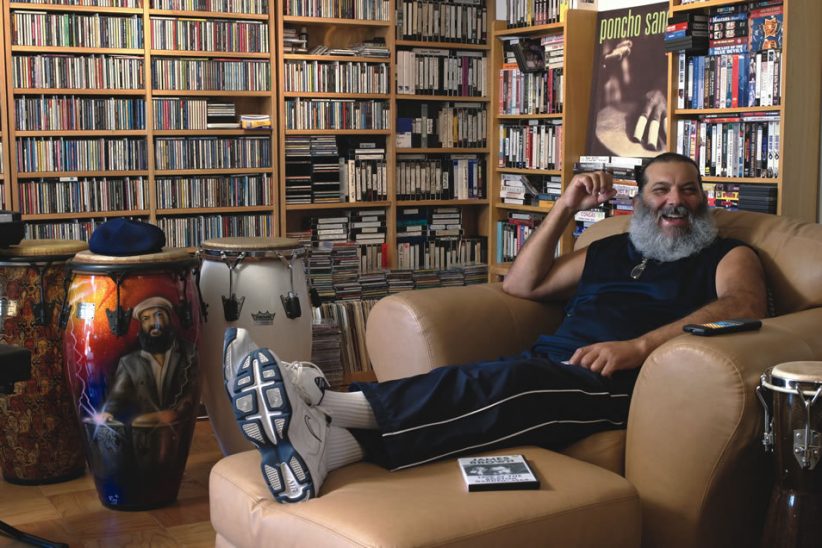 On rare days off in Southern California, Poncho Sanchez enjoys relaxing with vintage music in his second-floor den. It’s a long, bright room with an electric keyboard, three hand-painted Remo conga drums and various percussion pieces (guiro, caxixi, bongos). The room is lined with framed Sanchez album covers, concert posters, photos of Latin and jazz royalty and portraits of Sanchez rendered by fans. Against the far wall is Sanchez’s extensive collection of vinyl LPs, CDs and music DVDs, alphabetized in custom-built oak shelving. “There’s a lot of stuff in here, but it’s just my life,” he says. “All my CDs and all the music we play is just an extension of the way we grew up.”

An old-school musicologist, Sanchez can reel off trivia about soul, gospel and Latin stars of the ’50s and ’60s. He rhapsodizes about Sam Cooke-era Soul Stirrers, Cal Tjader (with whom Sanchez played for 17 years), Tito Rodriguez and Motown’s Martha Reeves, Smokey Robinson and Junior Walker. Favorites from childhood, they inspired the unique brand of soulful Latin jazz that Poncho has perfected through almost 30 solo albums since 1982. He earned a Grammy for 1999’s Latin Soul; his latest, the Concord Picante CD Do It!, was released in August and features tracks with South Africa’s Hugh Masekela and Oakland funk outfit Tower of Power. Last year’s live set, Poncho at Montreux, was recently nominated for a Latin Grammy in the jazz category.

During our visit, Sanchez is lit up about boyhood hero James Brown. He pops in a homemade video featuring footage of a 1968 Boston concert the Godfather of Soul played following the assassination of Martin Luther King Jr. The percussionist knows every nuance of the performance. “Watch this!” “Listen!” he urges when Brown does the Alligator, croons with the Famous Flames or lectures rowdy youths. After a scene where Brown strolls with fans on a street in Washington, D.C., Sanchez says: “All colors-I think that’s great. You could see the little black girls, he kisses them and they’re real proud. And the little Jewish kids in the background, they’re proud too. It’s real powerful. I got videos of jazz stuff like this, soul stuff, Latin music, everything. The thing is, I don’t always have time to do it. I’m always traveling.”

The Mexican-American’s flavorful Latin mix is so much in demand that he performs nearly 48 weeks out of a year. Now 54 and devoted to his family, including toddler grandson Ivan, Sanchez is considering cutting back on touring to spend time at home.

His two-story Spanish contemporary sits on a hill in an upscale section of Whittier, an industrial suburb southeast of Los Angeles. It’s not far from Norwalk, where Sanchez grew up the youngest of 11 and where he lived until just three years ago. Now Poncho and Stella-married for 33 years with two grown sons-enjoy four bedrooms, a deck, a pool and an unbroken view of the town below.

Another favorite room for Sanchez is the gleaming white kitchen and dining area. Born in Laredo, Texas, Sanchez watched his mother Emma cook for her brood and Poncho absorbed her skills; today he’s whipped up a mouthwatering lunch of pork in spicy New Mexican green-chile sauce, Spanish rice and refried beans. His recipes are featured in his Poncho Sanchez’ Conga Cookbook, a percussion primer that’s available at his Web site (ponchosanchez.com).

All the elements of his life-his family roots, teenage years fronting a local covers band, his apprenticeship with Tjader and his many collaborations and recordings-have been captured in a new documentary, Poncho Sanchez-Keeper of the Flame. The film premiered September 10 at the National Hispanic Cultural Center’s conference in Albuquerque, N.M., where the King of Latin Jazz was also honored. While excited, Sanchez’s renewed faith keeps him grounded about the accolades. “I think I’m blessed, because God gave me a gift to play music. I don’t know how to read and write music or anything. But look what I do!” Sanchez says. “So my wife and son and I go to Christian church on Tuesdays and Thursdays. It’s very important to me. We’re going to church tonight.”

Sanchez is instantly recognizable because of his beard and his Kangol Tropic-style caps. “I don’t wear my hats at home,” Sanchez says, adding that without the cap sometimes people don’t know him. Currently he likes Nike athletic wear. “Once I tried it, I went back and got every shirt, every color they make. I like to be comfortable.”

“I like to go deep-sea fishing. I had my own boat for 16 years, which I just sold about five years ago because I got too busy. I have a friend who has a boat and we go out toward Catalina Island, and I try to go at least once a month to catch bass. I have a bunch of Penn rods, Penn reels and Shimano-I have everything they make.”

Sanchez likes books on musical history. “I love the old photos; I love the historical value. When I get on the plane I’ll take a book with me and people say, ‘Wow, I’ve never seen a book like that before.'” He’s reading Showtime at the Apollo by Ted Fox (Mill Road Enterprises): “A friend of mine got me that at the Apollo, and I’m reading about how it all started and all the great acts that went there, from the rhythm-and-blues acts and even the Latin Night acts.”

Currently driving a LS430 Lexus. “That’s the third one I’ve owned. I lease them, so about every three or four years I get a new one.”