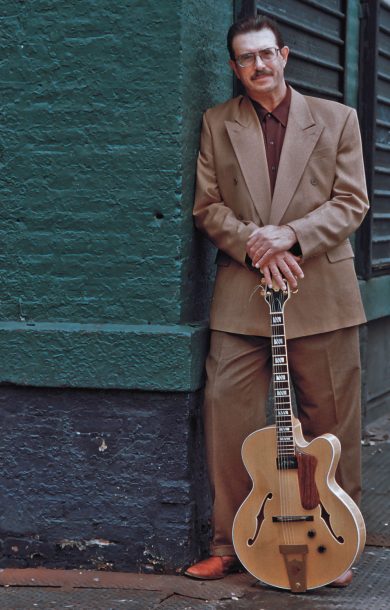 There are moments during this collection of duets, taped over a five-year period at Walker’s in Lower Manhattan, when you half expect Peter Leitch to put down his guitar, stand up and call for a little quiet. Really, people!

What’s distracting is not just the chatter often encountered at a restaurant with a no-cover policy, though that problem alone is enough to draw attention away from Leitch’s masterly handiwork. The kitchen clang and clatter is equally annoying, if not more so. When Harvie S takes a solo during “I Concentrate on You,” the opening number and a performance brightened by a series of melodic variations, it sounds as if someone nearby is shuffling dishes like a deck of cards.

A barebones, monaural, fixed camera film by Pamela Timmins, The Walker’s Duets has its merits, of course. How could it be otherwise given the assembled talent? In addition to Harvie S, Leitch’s duet partners include bassists Sean Smith and Ray Drummond and saxophonists Gary Bartz and Jed Levy. The mood is relaxed, the arrangements marked by good chemistry, nimble counterpoint and conversational exchanges.

Leitch contributes two pieces, including the bop theme “Sonny Red,” enlivened by Levy’s big tone and fluid phrasing. The remaining compositions come from a variety of composers, Irving Berlin and Albert Ayler among them. Leitch’s harmonic resourcefulness is always evident, even when he’s softly comping, and the tune selections allow him a chance to casually stretch out in excellent company, moving from vintage pop themes (“They Say It’s Wonderful,” with Bartz waxing lyrical soprano and alto saxes) and swing tunes (“Girl Talk”) to a bop favorite (“Oleo”) and a sunny calypso (Ayler’s “Ghosts”). Still, the close rapport that Leitch has developed with each of his guests would be a lot easier to appreciate in a less noisy setting.