Skip to content
Become a member and get exclusive access to articles, live sessions and more!
Start Your Free Trial
Home > JT Archives > Pete Fountain: The Duke of Dixieland 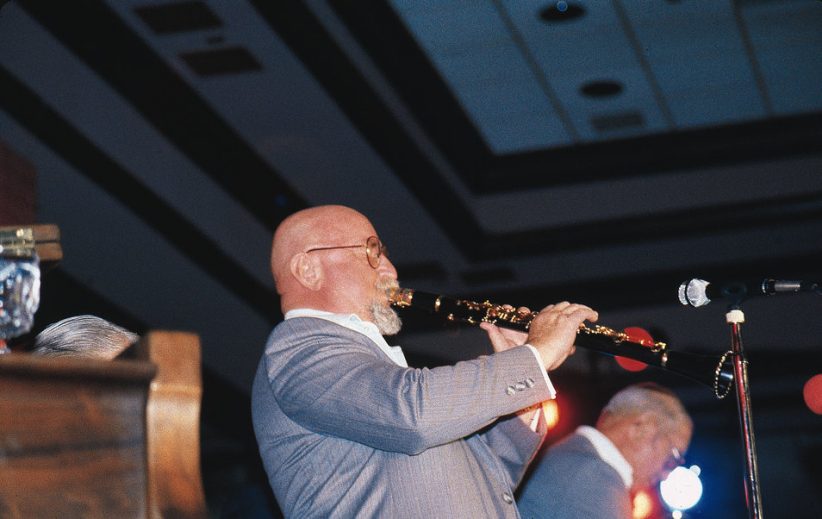 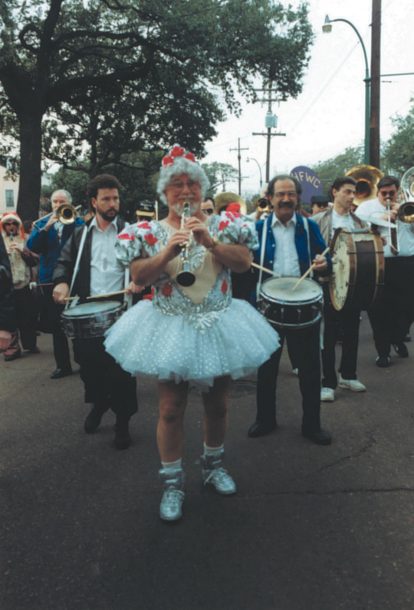 Pete Fountain appears a contented man as he sits in his homey office adjacent to his club in New Orleans’ Hilton Hotel. “Welcome to the inner sanctum,” greets Fountain as he walks through a hall lined with photographs representing a lifetime in music.

A robust individual with shiny pink cheeks and a ready smile, Fountain, 71, glows with a sense of knowing just who he is, of being happy with his life and thankful for his many successes. He’s come a long way from the skinny asthmatic kid who, at the age of nine, took up the clarinet on the recommendation of a doctor. Because of his health problems, the physician advised Fountain’s mother to get her son a wind instrument to improve his respiratory system.

“Years ago they called it weak lungs,” explains Fountain, who never again suffered with breathing difficulties. “It built up my lungs; in fact, they became oversized through the years.”

The prescription, of course, not only cured the young boy but eventually led to a career spanning some six decades, over 90 albums and international acclaim. Music drew Fountain even before he ever put a clarinet to his lips. As a kid, he used to pass a club called the Top Hat on his way to the movies at the nearby Arcade Theater. He would stop to listen through the fence to bands with musicians like trumpeters Sharkey Bonano and Louis Prima.

“My sister would have to drag me along saying ‘Come on, we have to go to the show,'” remembers Fountain, who really preferred peeking through the slats and listening to the music. “I found out I really enjoyed jazz,” he continues. “It was just the feeling of listening to the jazz like that, it just brings you up, even as a little kid. Something was there.”

Fountain grew up in a mid-city New Orleans neighborhood. About a block and a half away was Peterson’s Music Store, a spot where Fountain would often hang out. The proprietor, Harold Peterson, encouraged the clarinetist in his endeavors and would have the boy get his horn and play for patrons of the store who he thought would enjoy hearing him.

“Mr. Peterson put together a little brass band-it was called the Broad Street Social and Pleasure Club. He would get everybody in the neighborhood who played. They’d stop by my house and pick me up. It was a school night and my mother used to scream about it. They wouldn’t walk too long-it would last as long as a barrel of beer lasted.”

By the time Fountain was 14 he was already playing some dancehall jobs. “We had a little band and we’d get $5 a night,” recalls Fountain. “There were four of us so we’d get $1.25. One of the guys-Jack Delaney, a great trombone player-would borrow his brother’s car to take us to the job.”

Serious about music, Fountain listened to the clarinetists of the era like New Orleanians George Lewis, Raymond Burke and Irving Fazola as well as Benny Goodman. “I’m glad I did because I didn’t copy one particular clarinet player,” says Fountain. “I put those four together and came up with a sound.”

He developed his craft in ensembles like Phil Zito’s International Dixieland Express, The Dukes of Dixieland and the Basin Street Six. It was while with the Six, standing alongside childhood friend and music mate trumpeter George Girard, that Fountain realized his life’s work would be in music. “I went directly from high school to the Conservatory of Bourbon Street,” says Fountain with a laugh.

With the Basin Street Six, Fountain played what he calls “swingin’ Dixie” and it’s a style he’s stuck with throughout his career. During the late 1940s, trumpeter Al Hirt would often sit in with the Six, and he and Fountain developed a life-long personal and musical relationship.

“From then on we got to be friends and we worked together a lot of times,” says Fountain. “It was one of those things that whoever got the job wore the bow tie. If Al got the job he wore the bow tie; if I got the job I wore the bow tie. To work with Al, he was such a technician; he really helped me with my technique. Because to keep up with him, you’ve got to play because he’s not going to wait for you. He would kick off a tune and it was gone.”

A glitch in Fountain and Hirt’s musical careers occurred in 1956, when the two musicians, who by then had family responsibilities, faced a scarcity of jobs. Blame it on the rise of rock ‘n’ roll and rhythm ‘n’ blues in their hometown; for the first time Fountain abandoned music as his main source of income. The two stuck together, however, and went to work for a pest-control company.

“He was in the roach division and I was in the termite division,” says Fountain with a chuckle. “I was small and skinny at that time so I could get under a house. We didn’t last-I think we lasted about two months there. That was it.”

Soon thereafter Fountain and Hirt both got the breaks that would completely change their fortunes. Hirt went with vocalist Dinah Shore and Fountain got the call from bandleader Lawrence Welk.

“She really made him and Welk really made me,” says Fountain, who joined Welk’s band in 1957 and performed weekly on the bandleader’s popular television show. Fountain gained particular recognition on the program as he stepped out of the orchestra to lead a featured Dixieland combo that played classics like “Muskrat Ramble.”

Fountain initially went to Los Angeles to play with Welk for a couple of weeks but ended up staying two years.

“He kept me sober, and it damn near killed me,” recalls Fountain, laughing. “He was pretty hard on drinking.”

While Fountain was getting only union scale with Welk, he was gaining a strong following of fans and a reputation for his Dixieland style. He recorded an album with Welk and then debuted as leader on Pete Fountain’s New Orleans on the Coral label. (Rereleased by MCA, Fountain says the album is still selling.) Now a household name and recording artist, Fountain felt his career was flourishing enough that he and his family could return home.

“I wanted my kids to grow up in New Orleans like I did,” says Fountain. “Los Angeles didn’t have the heart and the warmth that you have down here. Even though my wife could cook red beans and rice, you miss the seasonings, you miss the crawfish and all of that.”

Fountain, who has now been in the club business over 40 years, bought his first nightspot at 800 Bourbon Street. Playing three shows a night, five days a week wasn’t easy work, but was necessary because of the club’s limited capacity. Several years later, the clarinetist moved the action up the street to a larger spot at 231 Bourbon. Now Fountain had the luxury of having to play only two sets a night. In 1977, the clarinetist finally moved Pete Fountain’s to its present location on the third floor of the Hilton Hotel. Seating 400 patrons and designed by Fountain to resemble the Blue Room club in Las Vegas’ Tropicana hotel, the clarinetist and his band began packing them in for a single show a night.

It’s a long way from Bourbon Street, and its heavy foot traffic, to the third floor of a downtown hotel. Realizing the problem from the onset, Fountain knew he had to let his fans across the country know where to find him when they came to New Orleans. He got in contact with The Tonight Show, then hosted by Johnny Carson, and asked to be a guest. The resulting performance served its initial purpose of advertising Fountain’s new locale and also became the first of 58 appearances on the popular late night television show.

With the release of 2001’s Big Band Blues (Ranwood), two of the most influential aspects of Fountain’s career-appearances on Welk’s and Carson’s television shows-came together. On the album, Fountain performs with the New Lawrence Welk Orchestra on arrangements by former Tonight Show guitarist Bob Bain. Through the years, Bain wrote these charts specifically for the clarinetist’s many appearances with the Tonight Show band, then led by Doc Severinsen.

In New Orleans, Fountain is renowned not only as a clarinetist and club owner, but also for his annual Mardi Gras appearances with his Half-Fast Marching Club. Since childhood, Fountain enjoyed watching and listening to Carnival organizations the Jefferson City Buzzards and the Corner Club. So in 1961, he and a group of friends formed their own marching club. The group of costumed revelers makes an annual trek from uptown New Orleans to the French Quarter, heading out on Carnival morning to walk in front of the famous Zulu parade. In Half-Fast’s early years, the Onward Brass Band accompanied it, led by drummer Paul Barbarin and later by clarinetist Louis Cottrell. For Carnival 2001, almost 200 people marched with the Half-Fast, which boasted two bands and, of course, Fountain’s clarinet.

“It’s New Orleans,” says Fountain of this Mardi Gras experience. “It’s part of me; it’s part of my life.”

As Fountain sits comfortably in his office, the walls full of photographs tell his story. Autographed pictures of stars like Frank Sinatra and Johnny Carson hang next to those of Fountain and his father costumed as Indians during one of the Half-Fast’s notorious marches. Fountain is at once the famed musician who played with trumpet legend Louis Armstrong and at the White House, and the guy who can’t resist hitting the streets for a second-line parade.

“I’m still here tootin’,” says Fountain with a smile. “What you see is what you get.”

“I just got a brand new Pete Fountain’s Big Easy model clarinet made by LeBlanc. I use Pete Fountain reeds, number two or two-and-a-half, made in France by Marca.”