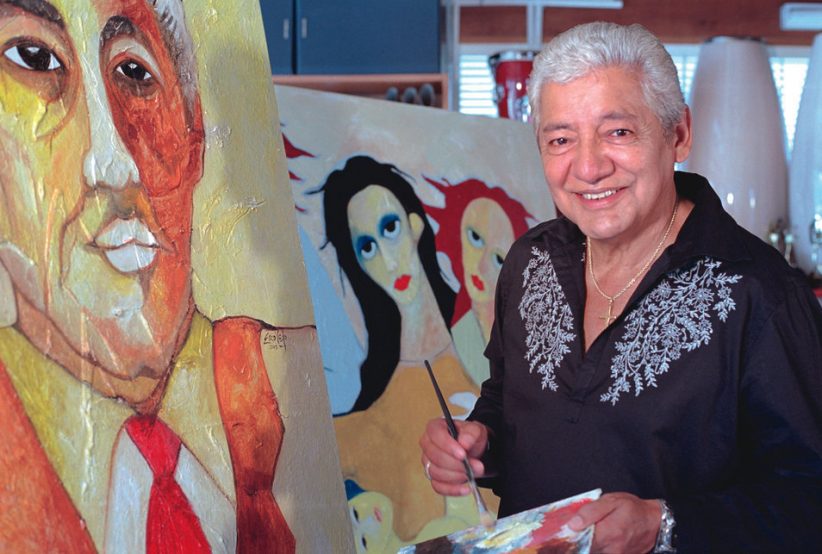 A glimpse into percussionist Pete Escovedo’s southeastern San Fernando Valley house of two years reveals his art talent. “I started both music and painting at the same time in high school,” explains the 68-year-old Escovedo, who’s a quick hop from Hollywood and greater Los Angeles’ venues and studios. He paints for relaxation, when he has free time, and his abode also serves as a gallery of his work. Artistically, his style strongly resembles renowned Mexican artists Diego Rivera and Frida Kahlo, and he’s excited about having his first exhibit in Southern California.

“I actually had a scholarship to go to an arts and craft college in the Bay Area,” he says, “and a job with an advertising firm when I got out of school. But I started playing Latin jazz, and that changed my thinking.” His change of heart became Northern California and Latin-jazz folklore when the Oakland native and former long-time resident began playing with his now-deceased legendary brothers Coke and Phil, as the Escovedo Brothers. Later, he and Coke joined Santana before going on to cofound the pioneering jazz-funk-Latin ensemble Azteca.

Eventually his children Sheila and Peter Michael talked him into making the move to Southern California, but before heading south the paternal Escovedo led ensembles and for many years jammed with groups on the San Francisco music scene, including the Grateful Dead, Jefferson Starship and, of course, Carlos Santana. In Latin-jazz he befriended great players such as Tito Puente, Mongo Santamaria, Eddie Palmieri and the recently departed queen of salsa, Celia Cruz. His career is vividly portrayed throughout the cozy 1,700-square-foot house that he shares with Juanita, his wife of 46 years and youngest daughter, Zina. Escovedo’s digs display a mixture of dynamic artwork, gold records, photos of him playing, pictures of musicians and the Rat Pack (Frank Sinatra’s famed gang are his idols). Of course, snapshots of his musical offspring, Sheila E. (of Prince fame), Peter Michael and Juan are included. Also pictured are half siblings, Javier, Alejandro and Maya-the rockers in family. “We don’t talk to them,” jokes Escovedo, who also has 11 grandchildren and four great grandchildren.

Typically the pool or the 38-inch RCA TV in the family room are the home’s hubs. Juanita makes everyone feel at home with homemade margaritas and a tantalizing mix of Mexican and Creole cuisine, reflective of her New Orleans roots. Sometimes the focus shifts to music and everyone migrates to the garage to jam. “It’s always fun, and my wife, like Lucy [Ball], has no talent but always wants to get in the act,” Escovedo laughs (he later admits that she’s a good singer). “It’s not like it used to be; now the kids all want to be paid,” he quips. “But it’s really great to see that they’re all successful. Sheila has her production company and is currently touring with Ringo Starr; Peter Michael is musical director for The Wayne Brady Show; and Juan is working on his own material.”

Commenting about continuing his illustrious career, which also has been jarred by the tragic losses of his brothers and his dear friend Tito Puente, Escovdeo says, “I thought about being in my late 60s and slowing down. But the kids said, ‘Oh, no, we’re not going to let you quit.’ So as long as I’m feeling really good, it’s still fun and the band is sounding great.”

On his current home life, he says, “It’s funny: we thought that we were going to have a nice quiet, peaceful wind-down of what we had in Oakland. But a lot of the same people who came to that house now live here, and we have a houseful all the time!”

“I like Oceans Eleven, the original one; it was great. I like Some Came Running with Frank Sinatra, Dean Martin and Shirley MacLaine; that was cool. Also some of the old ones like Citizen Kane, A Place in the Sun, and the fight movies like Champion with Kirk Douglas and Body and Soul with John Garfield. I recently saw Pirates of the Caribbean and thought that was pretty good.”

I like biographies such as Tony Bennett’s. Sammy Davis Jr.’s-I read both of his books. Or I’ll Dress You in Mourning, about the bullfighter El Cordobes, is a great book and one of my favorites.

I like black and white or dark colors. Sometimes I’ll put on loud colors. I enjoy wearing suits and make my band wear them regardless of the weather. If it’s really hot, I’ll let them go without ties. I like the clothes at Sy Devore’s, and the Rat Pack used to buy all their clothes there. Also I like Kenneth Cole’s stuff.

I’m a football fan and like the 49ers. Baseball, it’s the Giants, and Orlando Cepeda was a good friend along with all the Latin players back then. I like to watch boxing and play golf every chance that I get. Sometimes I play with Harvey Mason and some of the other jazz guys.

I like Italian, Spanish and Mexican food. All my kids are the same, except Peter Michael; he’s a vegetarian. But the main is thing is Latin food and my wife does most of the cooking, but we also go out a lot for music and there are some great restaurants in Southern California.

I like going to Hawaii and Puerto Rico. I went to Aruba and thought that was really nice. I haven’t been to Cuba or Brazil yet and really want to go. We always make a point of getting away and not having to play music.

I use the computer for business, but I’m not a whiz with it. I have a Mac and don’t know how to download files or send pictures. I haven’t gotten used to it for composing yet.

I read the trades, JazzTimes, Down Beat and Jazziz. Occasionally, I buy Billboard, GQ or Men’s Health.

Karl Perazzo plays percussion with Santana and now has a band in the Bay Area called Avance with a nice approach to salsa. I like some of the young singers like Peter Cincotti and Norah Jones, and I’m great fan of Diana Krall too.