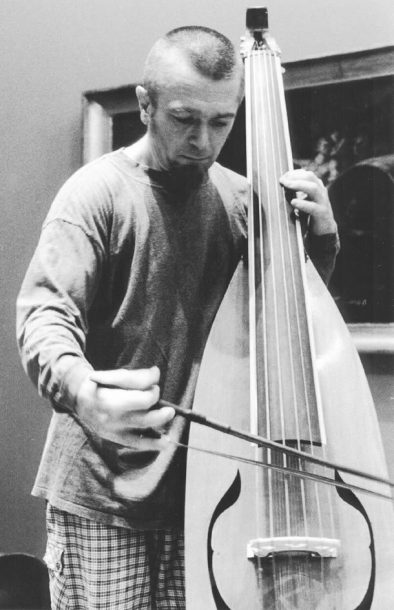 “This is my dream instrument,” Paul Rogers says of his A.L.L. bass, an 18-stringed instrument with 12 sympathetic strings running the length of the body and under the fingerboard. The British bassist is no stranger to unconventional instruments, having played a five-string bass for a portion of his most recent solo CD, Listen (Emanem). Beautifully crafted by Antoine Leducq of Atelier de Lutherie in Nîme, France, the A.L.L. bass has a stunning extended range and enhanced palette of textures, as anyone who heard Rogers’ 2002 U.S. duo tour with saxophonist Paul Dunmall will attest. (Rogers and Dunmall will team up with American drummer Kevin Norton for East Coast gigs and a CIMP recording date in May).

“I’ve been playing improvised music around 30 years now and this new instrument is a logical development for me,” says Rogers, who, since arriving on the London scene in the early ’70s, has played with every U.K. notable from Stan Tracey to Elton Dean to Evan Parker. “I believe that in improvised music you don’t have a soloist and backing musicians-just people creating together. I don’t see myself as a bass player but as a musician who plays free improvised music with this new instrument.” Rogers believes that the A.L.L. bass “might make it easier for the listener not to think about the bass, but just the music.”

To date, Rogers’ discography with the A.L.L. bass is slim, the most readily available example being Hour Glass (Emanem), a trio date co-led by Dunmall and drummer Tony Bianco. Still, whatever instrument Rogers uses on a given recording doesn’t diminish his underlying point about ensemble improvisation, particularly in regards to Mujician, the long-standing quartet of Rogers, Dunmall, drummer Tony Levin and pianist Keith Tippett. Their finesse in simultaneously accommodating each other while making strong individual contributions is evidenced on their fifth Cuneiform CD, Spacetime, which ranked 24th in JazzTime’s top 50 CDs of 2002.

“Mujician has been together for so long because we don’t pass judgment on each other,” Rogers says about the quartet’s approach. “We have never talked about the music-we just get ready and play. This works because we play with love and respect for each other. Whatever anyone wants to play is the right thing for that moment. This is real free improvisation.”